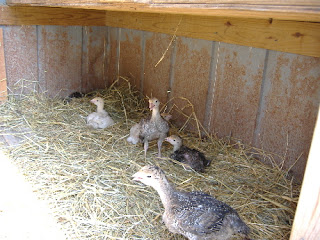 You might be thinking, what do post offices have to do with turkeys? Well, that can be two fold.

The first Turkey I ran into at the post office was an employee. He asked to see my ID because I was purchasing stamps with a credit card. He dramatically looked at my ID, then ME, then my ID, then Me. Finally he said, you look nothing like this picture, IS THIS YOU? DUH!!! Like I'm going to say NO, if I was some sort of terrorist trying to buy a roll of stamps.

Could I possibly look like a terrorist crook? I'm standing there, amost 50 years old, bandana on my head, white t shirt, favorite jeans, socks and birkenstocks. The worst thing somebody dressed like me would commit would be preventing somebody from cutting a tree down in Washington State. I was only lacking my Starbucks to prove the point!

Ok, so the guy was a Turkey.

I get a call from the famous Post Office telling me my Turkeys are in to please come and pick them up.
HUH!!!! They are a tad early. I wasn't expecting them till next week. Oh well. Turkeys, we aren't ready but what the hey, let's load up in the van and start a new adventure.

We get to the post office and they look at us like we are from Mars. Turkeys? What turkeys? I say, "you called me 10 minutes ago! What do you mean "what turkeys!" So, I call home and have mike get the Number from Caller ID. It turns out my Turkeys are over an hour away at the Coppell Post office. I am trying to figure this out, and it turns out that the Coppell Post Office is a big branch for all the other post offices. BUT... the package said, when it arrives, call customer for pickup!
Now I know, that package went to at least 3 post offices, with that sort of Logic, I would have had to pick them up in Idaho where they originated!
The person on the phone actually tried to defend not sending them to Wylie! Even though we have picked chickens up in Wylie on more than one occasion!
I'm thinking, did they transfer the Wylie guy to Coppell????
DUH.
So, I agree to drive ove ran hour to pick them up. Then they say, oh, you aren't a business? You can't pick them up here, this is only for businesses and other post offices, there is HIGH SECURITY HERE you won't be able to get in!!!
WHAT!!!!
Ok, so my Turkeys are not in Wylie, but Coppell. They called me to come and pick them up, but now that I'm coming, they can't let me in becuase I'm not supposed to be there? It is high security??

I get a call back after they figure things out and get permission to pick up my poor turkeys. When we arrive a lady looks at my license plate, has me write my name on a check list and tells me what loading dock to go to. I walk up and tell them what I am here for. (I'm the Turkey lady!!") They go get my turkeys and ask to see my driver's license. You know, the one that doesn't look like me! That one. I'm thinking OH GREAT, I'm going to get arrested for Turkey Theft because I don't look like me. He didn't say a thing about me not looking like my driver's license picture.

I drove off back to Wylie wondering....... Who are the real Turkeys?