Today is April the 16. Two years ago today, at this time, Mike and I were sitting with Erika at the American Medical Center to get a physical for Erika. Tomorrow, we would have gone to the Embassy to file for her Visa, pick it up that afternoon, and then Fly home on the 19.

We arrived home on April the 20th, 2006 at around Midnight or so. We were delirious from flight, and staying awake for endless hours, but so excited to see the girls again.

My heart swells when I think about that moment. That moment our lives were forever changed once again. That moment when Erika stepped onto American soil and became an AMERICAN CITIZEN! I remember thinking, "She is so little and has NO IDEA what an important step that was off of the plane. She has no idea how the Lord moved on her behalf through incredible circumstances and fervent prayers to bring just one little girl to her new home. She has no idea what awaits her!"

She looked so small, so frail.. so scared, and yet there was a braveness in her that showed she was strong. She walked into the "unknown" world, never to look back.

I remember on the way to the airport she asked the translator "How long will it take me to learn English?"
"When will I see a doctor?" With that question, her eyes were filled with fear. :(

Just a little over 4 weeks before, she met us for the first time. She had been waiting; according to her, 50 years! She knew we were coming, but didn't know when.
She had become sad and depressed, as it took so long. One family on one side of the world, and one little girl on the other side, both longing to be together. Had it been up to us, it would have happened much sooner, but it wasn't up to us. Even though it seemed to take forever, mountains were moved to get her here.

Just 1 week before we boarded the plane, we were able to pick her up from the orphanage and take her with us forever.
She could barely walk, but she nearly RAN out of that orphanage. She was so excited.
We taught her to say, "Let's Blow this Joint!" She bellowed it with gusto! :) 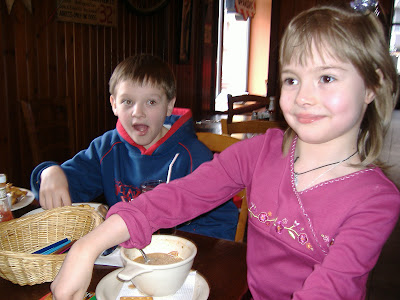 She had never heard of McDonalds and when we took her there, she wasn't amuzed. She told the translator we ate at a cafeteria. 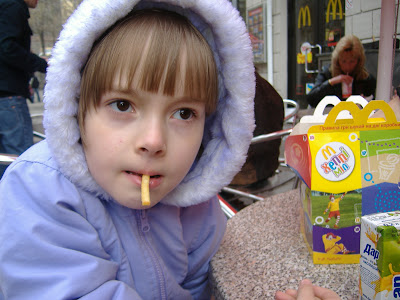 Here we are on the train. 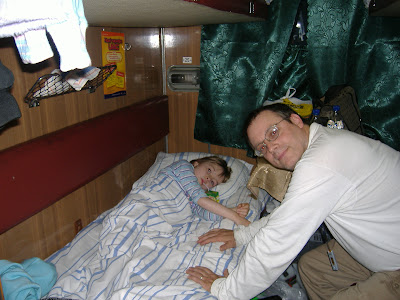 After 1 week of being FREE from that orphanage, she was in America.

Oh my the interesting things! Toilets that flush on their own, water that comes on by putting your hand under it, never ending paper towels that just "show up" after you get one. And that was all at the Atlanta Airport!!!!

Upon coming home, besides all the excitement of sisters and brothers, there was the dishwasher, the washing machine, dryer, our own car?????!!!!!!, DVD player, locks on doors, refrigerator! "A MAMA CAN COOK???" WOW!
The newness was endless.

I waited 2 weeks before taking her to the store. I didn't want to overwhelm her. She asked for "chips", so I figured it was time to show her SUPER WALMART....
We walked in and inside I was laughing because I KNEW those eyes were going to have that funny look of surprise and awe!

(Can you really have surprise and awe at Walmart? If you are a Ukrainian orphan you can)

I walked this awe struck child to the "Chip aisle". That isle where there is every type of chip in the world. :) Mind you, she had asked for Chips in Ukraine and they had limited kinds; mushroom flavor, tomato flavor or nothing. :) She actually ate mushroom flavored chips!
There went that look of awe and surprise at the chips and this little girl burst into quiet giggles of glee. She couldn't believe what she was seeing.

Many people think when adopting an older child that you miss out on all those firsts.
To that I say, the firsts are different. I really don't mind missing potty training, but there is no first like a kid who has never seen anything remotely modern and is suddenly thrust into the modern world.
It is both sad and hilarious. Can those go in the same sentence? Only in the world of International adoption.

And we are cherished and loved.

Here are a few pics from Ukraine: 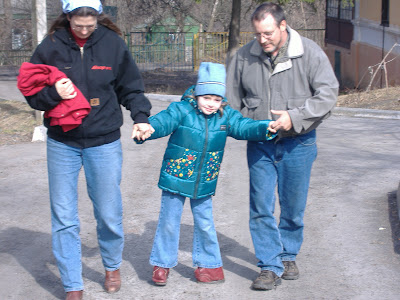 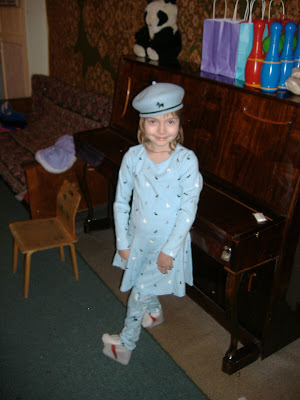 Congratulations on two years with your beautiful daughter!