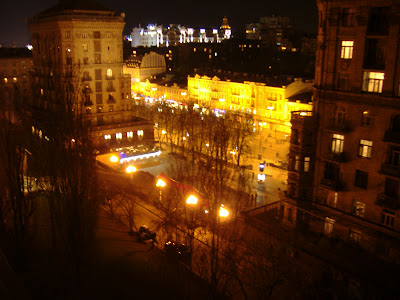 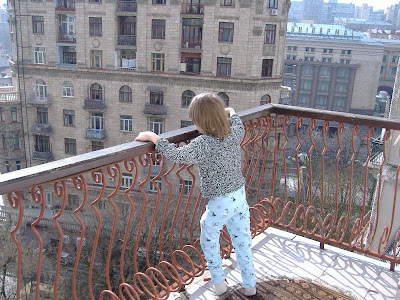 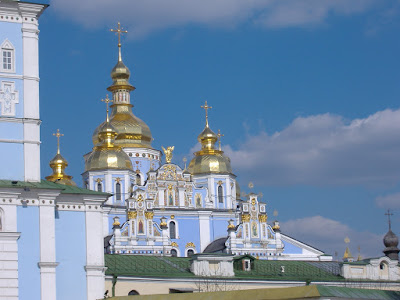 Two years ago today, we left Ukraine. It was so amazing. We were full of adrenalin and soooo ready to go.

On Easter Weekend, we found out that we would be in Ukraine an extra day, so we had to change our plane tickets. We called the number for the airline, but it was out of order. So, we asked our translator, and weren't getting too much help. She said, "we'll take care of it tomorrow!" TOMORROW! That would be the weekend of Easter and we wanted to make sure we got home.

We were feeling a little down and I didn't want to cook dinner that night. Probably because when I tried to buy pepper the lady at the store kicked me out of line 3 times because I couldn't say the word pepper! I could say salt, but not pepper. Made me feel compassion for those who come here and people treat them badly because they cannot speak english. You never know, nor should assume that somebody has been here for a long time. Maybe they just arrived! A little compassion can go a long way.

Anyway, I wanted to go over somewhere and Mike agreed. So we set out to find a place.
We found a menu that was in ENGLISH! It said, come on in, cozy environment... etc.

So we went in. We were seated, but unfortunately, we unknowingly picked a "pick up joint" to eat at. We tried to ignore the cuddling couples but the blaring giant screen with Russian MTV was just too much. The last straw was they said they had no borscht!
You have no borscht? That is like going to china and them telling you they have no rice!
So we left. The lady was walking to us saying, "We make borscht!" "We make borscht!"
We said, no, since you don't have any, we'll eat somewhere else.

So here we are wandering around Kiev, with a need of new tickets, no IDEA how to get them, hungry, cold, and feeling very overwhelmed. We were praying that the Lord would help us and show us what to do.

Mike said, let's just go back to the apartment. I couldn't. I said, "can we please just go to that TGI Fridays! I need tortilla chips!" He chuckled and we went. When we got there it was a little late. Around 8:30, and it was TOTALLY crowded. No seating. Now in America, you wait. In Ukraine, apparently you leave. We said we'd wait. The hostess didn't know what to do! She said, YOU WAIT? DA, we wait! I had this mantra of "tortilla chips, tortilla chips, tortilla chips, going off in my head!

Just then, a fellow sitting fairly close to the door, by himself, at a table for 4 piped up and said, "I'll move over there, (a place for 2) and they can have my table!"
The thing is, he said it in perfect english!!!!

My husband said, "Why don't you just stay where you are and we'll join you!" He smiled and said, "Ok, great!" So we joined this very sweet man.
He asked us what we were doing in Ukraine. We introduced him to Erika who spoke no English at this point, but was trying very hard; we said "cheese" and smiled at her and she started singing "Jesus Loves Me"; we told him about how the Lord miraculously brought us to Ukraine, how each and every miracle took place while we were there and he said, "Wow, how many needles can be threaded at one time!

Then Mike said," Well, we need one more! Our tickets have to be changed and we cannot get ahold of the airline to change them, and we aren't getting much help from our translator. He asked, "What airline?" Mike said, "Delta". This man got a huge smile on his face as he told us,"I'm the new Director for Delta Airlines".

We both burst into laughter. God had answered our prayers of desperately needed help!
The tickets we had were for Delta Airlines and Air France. He just simply said, "Oh, come by Monday morning, we'll fix you right up, the ladies in the office are great and
be sure to ask for me. I'd like to see you again. So we had a wonderful dinner and fellowship with a guy who had only been in Ukraine for 5 weeks. Even he was blown away with the many needles being threaded on our journey of a life time.

Here is a picture of Erika all ready to go: 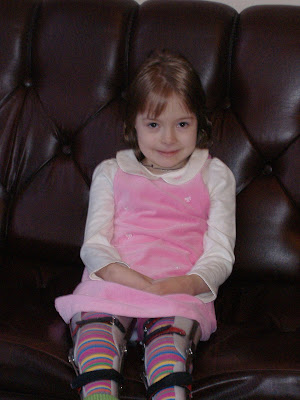 We arrived at the airport, took a few pictures and were ready for our next adventure.
I was desperate to keep as little with us as possible because of Erika not being able to walk very well. I decided the lighter we can carry on the plane, the better.
So I packed everything except the envelope for the Custom's officials in America.

When we got to the second checkpoint, after check in with Air France, the man, who didn't smile, asked for Erika's ORIGINAL adoption certificate. We had her passport and a "Copy" of the original, but the original was packed and already checked on the plane! There was no budging from this guy. "No original document, no leave country!"

I ran down to Air France ticket counter and explained our dilemma. They were so kind.
They pulled our luggage off the plane so I could get the document out. I ran back up, the guy looked at it and handed it back to me, with that dull lifeless expression of "I'm bored with you". AHHH!
I could feel myself burning inside. I so much wanted to take off on that plane!

So, we made it through with about 15 minutes more to go before boarding the plane.

Erika and I had the most awful bathroom experience. She had to use the "toilet". I carried her to the bathroom. The first door, which was the handicapped bathroom was locked. I went to the next door, exhausted and nearly delirious from all that running around and panic... swung that door open and Erika and I burst into one loud "scream"!
AHHHHHHH!!!!! I thought that door would never shut. It was the men's room. There were rows of them! All staring at the crazy lady who invaded their privacy. Sorry.
So Sorry! We found our way to the next door and the right place.
When we got back to the waiting area, Erika had a great story to loudly rattle off to daddy with hand motions and expressions and the famous, "AHHHHH!" Of course everybody else in Ukraine was laughing at mommy, but daddy had to ask me for translation.
I embarrassingly told him what happened and then it was time to board the plane thank goodness!

(you can view Erika's takeoff, by going to the side bar under YouTube Videos)

We weren't on the plane for long and, itt started moving. Erika was so excited, and scared, and I'm so glad we caught that fuzzy little moment on Video. She burst out with "Bye Bye UKRAINE"! I couldn't help but have tears. It was so precious. People around us were chuckling at her excitement.

A new life awaited her and she was going to be re-united with her dearest friend, and meet her family for the first time.... 26 hours later.
Posted by Christie M at 6:12 AM