Today was a BIG day. The time had come to put the big turkey in the Freezer. To get him from Large Feathered Fellow to Neatly Freezer Wrapped and Ready to Thaw at Thanksgiving took nearly ALL DAY LONG!

Part of it was because he was so stinking big, I couldn't use the scalding pot. He wouldn't fit; NOR could I lift him in and out.

So, this a.m., I did the dirty deed, and Anna complained that we always eat the boys.
Somehow I remember that comment coming from our own boys. :)

After a couple of hours it was plucking time. Boy I could have used Grampa right about now. But the girls and I plucked and plucked and plucked. Then, it was time to bring him in for the big gut clean. It took FOREVER. Then, the final pluck, with all those little stubborn feathers. Then the clean and rinse. Then the WRAP. It took a LOT of wrap to keep him safe until Thanksgiving.
Ok, a different sort of safe. :)

So here is a picture of Anna clutching her Duck friend, who she is so very thankful is also FEMALE and not large enough to warrant all that plucking.
(that means, Aunt Jemima Puddleduck gets to live) 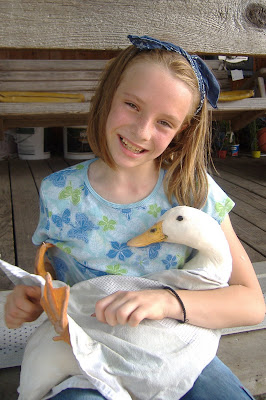 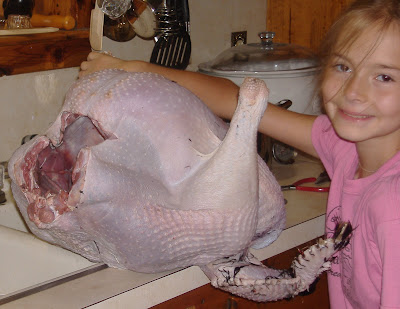 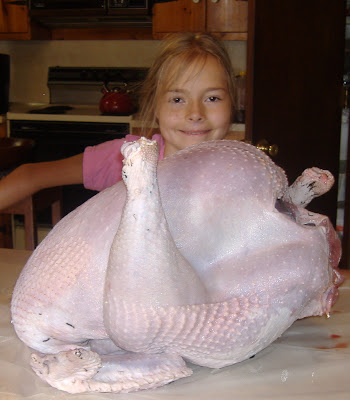 Anybody want to take a guess on Weight??

We weighed him. It is great having more minds, as mine doesn't work so well sometimes. I wanted to weigh him and I didn't even think of bringing the scale to the counter. I was telling the girls, "I don't know if I will be able to weigh him cuz I can't carry him to the bathroom!" Anna said, "Mom, we can always bring the scale into the kitchen!" THANKS ANNA! (why didn't I think of that) duh......:)

If you are coming for Thanksgiving and guess the right weight, you get first dibbs on the Turkey, though I'm sure there will be plenty to go around.
Posted by Christie M at 4:38 PM

50lbs
-katie
If I am right and coming to thankgiving i call dibs on a leg:)

Though I am pretty sure I won't be there for Thanksgiving!

Wow! I just get the free bird that comes with my $99 purchase from the grocery store. :)