Camp Out On A Limb 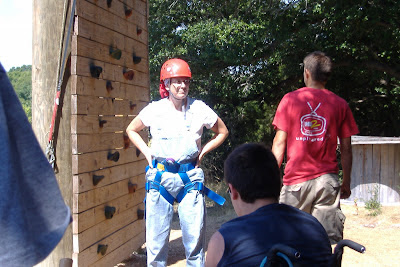 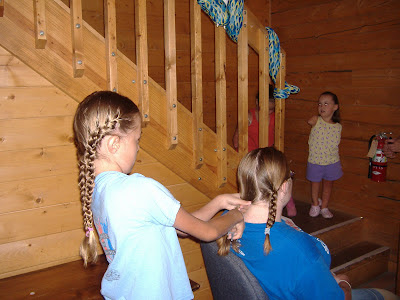 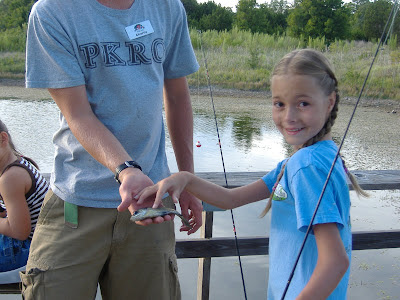 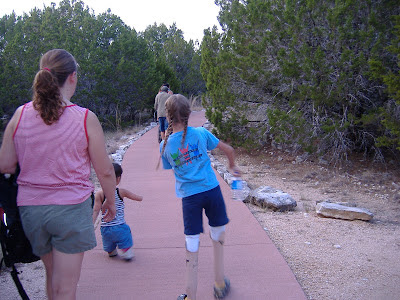 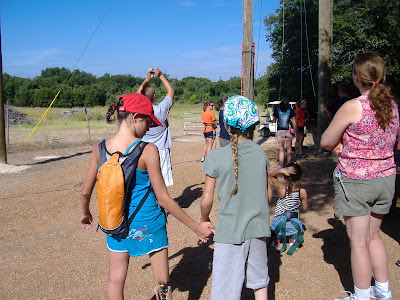 We always joke that it should be called Camp Out OF A Limb.... Erika and I had a wonderful time once again at Peaceable Kingdom Camp for Children. As for me, I waited an entire year just to go down that Zip Line once again! Erika was looking so forward to horse back riding. On the way home, I asked her, "What was your favorite thing about Camp this year?" There was a thoughtful pause, and she said, "Horses, Golf, Swimming,Scuba diving, Movies, Games, eating in the cafeteria, talking with Shawn late at night in the bathroom, and making friends with Brittany.

Shawn had a pow-wow meeting with the girls late on the last night we were there. She was so funny teaching them a special signal to use if they wanted to talk. This time it was the "blink your eyes if you want to speak signal". It was comical watching a bunch of little girls blinking frantically to be called on. Erika enjoyed the talk in the bathroom after they finished scaring the boys. Shawn asked about what they do if others make fun or tease them. Erika listened to the answers, and then poetically, when we got home, we played the DVD handed out at camp called, "No Arms, No Legs, No Problem". He covered some really great answers to that issue, and talked about who we are on the INSIDE is what matters.

What our children look like on the outside is not what defines them, but who they are on the inside. This is really what Peaceable Kingdom Camp brings out in our kids.

Imagine a young man 14 years old with no arms and no legs, dancing his heart out, and everybody just loves it. How about an arm wrestling match between a guy with 1/2 an arm against a guy with no legs? How about a little girl doing ballet taking her legs off to perform? How about a little boy with one arm doing hand stands, hurling his body into the air to balance? How about a child who is blind, autistic, missing lower legs, has just one finger on one hand and a nub on the other, playing the piano beautifully and singing Amazing Grace? Let me tell you, I don't know if there were any dry eyes.

There were the typical pranks and kids play, or was that the adults pulling off those pranks? There were Bugs and snakes, saran wrap on the toilet seat, sneaking over and knocking on the window late at night, and the typical, "I don't know WHO used all that toilet paper!" "Silly String?" "Isn't that a thing of the past???" The swim basket ball games and just great fun hanging out together.

The children were drawn together for a wonderful week of friendship and partnership. I saw children help each other, build each other up and just have an all around great time. It didn't matter that the cabin was strewn with extra legs, prosthetic socks, little kids looking for their own....."Mom, do you know where my leg is?" "Take your legs off sweetie." "Do you need to put your legs back on?"
It was all pretty normal.

There were also the important friendships developed among the parents. Other than going to the hospital and camp, we have never, ever, seen another child who has limb loss or limb differences. It is refreshing to be with other parents who live similar lives with their children, who hurt for their children's losses, yet cheer them on to do wonderful things in life. These parents have the patience of Job. They have deep abiding love, they are proud of their children, and they are brave enough to let their children fall, try and try again, which will result in them blossoming and growing in both personal strength and creative independence.

Thank you so very much Peaceable Kingdom Camp for Children and Texas Scottish Rite Hospital for Children and your awesome dedicated staff. Had it not been for you, Erika would not know that she can do so very many things like SCUBA DIVING and I STILL would have never gone down a zip line. And that zip line is WAY COOL!
Posted by Christie M at 3:59 PM

i loved shawns pow wow the last night. and the talk in the bathroom. i watched my dvd last night, oh man that was amazing as well. i had so much fun with you and erika this past week thank you so much for everything!-kylie

Glad camp lived up to your expectations.

What great photos! I LOVE the close up ones of Erika wearing a scarf! (In the first one, I thought she resembled Anna quite a bit.)

that was when I was in camp,I friend that is named Brittne, we where holding hands,I have a friend that named Kylie,I was brading her har.


I miss them all.