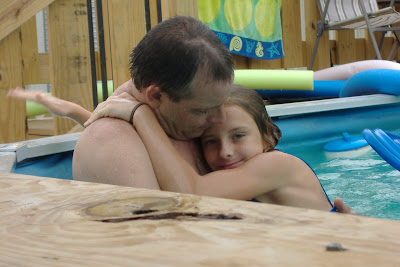 Children, though many times quite young when this stuff happens, have some sort of 6th sense when anniversary time comes around. We have always noticed that there are two specific times of year when our Anna has relived past trauma. One of those times is now, and the other is during the holidays.

Every year, things have gotten better and we are going on year 5. Anna came to us on about her 5th birthday. That is around holiday times.

However, the first year we had her, we were abit perplexed at her behavior in August.
She had been doing great and then all of a a sudden WHAMO, from out of no where these traumatic behaviors showed up.
We headed straight for the rocking chair and she'd just pour her little heart out. Memory after memory.

When we finally got her adoption paperwork in the mail which didn't happen until after that first August, I was flabbergasted to see that her dramatic removal from her mother occurred in August and then there was yet another removal at the end of August from one foster home to another! So August was a FULL month of trauma for her.

So Mike and I were all geared up for this month, expecting to see some difficulties, though not the ones we have seen before. And, pretty much, not a lot happened.... then a few weeks ago, there was a little blip, like with any NORMAL child, and then the events of yesterday and today.....


HERE IS WHAT HAPPENED!

Yesterday, Erika wanted to write about her life. She started to write and started reading out loud her story about being in the orphanage. Anna later came over to me and started to cry. She said, mama, I'm not the same person you think I am. I am not the same girl. I am a new girl. I have been reborn. I was a little puzzled at first but kept listening to her. I rocked her and soothed her and talked to her. In the back of my mind I was trying to figure out what she was saying and honestly, I wasn't sure, but didn't want to suggest anything, so I just listened. (learned that from Mike, he is so great at this)

So then, last night, when Mike and I were going to bed, we noticed that Sarah had climbed onto the top bunk with Anna and they were laying there talking. I sensed it wasn't a time to tell them to stop talking and go to sleep, even though I was tempted as it was 11:30. Anna NEVER stays awake much after her had hits the pillow! So something was on her heart.

Then today, She handed me this: (she used part of a poem and changed words in it, but it is how she feels, and I think she did a pretty good job!)


About the story:
Anna is the baby
The two good people are mom and dad
The child is me, Anna.

To shine for Dad and gracious mom
The small baby did so beam
Two good people smiled
Brought song and beauty to this child.
Posted by Christie M at 12:38 PM

She is quite the writer. :)

Very sweet.
I am eager (but not) to come to the day where our kids will remember out loud for us. I know what's on paper but there is so much more. and I want to know things from their points of view.

I will say however, that with boys, things will be so very different in how they relate things than with girls. Boys in "general" seem to take things so much more matter of factly. Of course they are all different.

Anna is our more contemplative and emotional of the 3 girls. The other girls, however, she remembers more of her circumstances and her bio mom. The other girls only knew the hospital and orphanage.

HAY! Mom I know why the boys are diffrent because we where not born from the same mom, And because boys are boys, girls are girls.

You are my "lovely lady Sarah"!

Boys are boys, girls are girls and Moms are MOMS!

And THIS MOM LOVES YOU FOREVER! :)