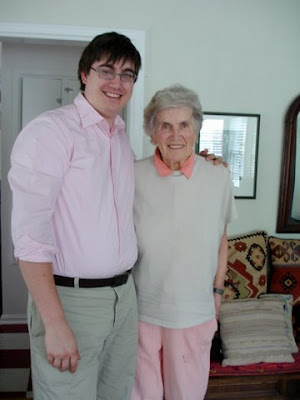 This is Dabba and Joe last year.

I just wanted to share a few things about my Dabba. I have not physically seen Dabba since the boys were much younger. She came to Dallas one last time to visit, and we had a WONDERFUL time. She met Mike for the first time and accepted him with open arms.
After that, she went on to Israel and lived in Jerusalem taking care of handicapped children in an orphanage and working at Bridges for Peace. She survived the first Gulf War when Saddam Hussein was sending Scud Missiles into Israel. She said, "we would have to carry all the children down to the shelter, by the time we got down there the all clear siren would go off, we would get them all back to bed and then before we knew it, the siren would go off again and we would repeat the entire process." This is a woman who had suffered a broken hip a few years before. But she LOVED every minute of it. Ok, not the bomb shelters, but she loved what she was doing.
During a time of relative peace, right before the Infantada, our son Chuck went to visit Dabba in Israel. He was 15 and what a trip he had. I don't think he will ever forget that experience.

Dabba and I share funny stories of life from long ago and we share the ones of today.
Some of our funniest stories seem to stem from Aunt Lee Lee and Joseph. I do remember when Dabba broke her hip, we didn't know it was broken yet. I had to go to work and she was caring for the boys. It was a Saturday and she was resting a very sore hip. Apparently she was dozing in the recliner and Joseph had moved in to stare at her rather closely. His breathing startled her and she startled him when she opened her eyes with his eyes meeting hers. I believe there were screams from both parties. I'm not describing it too well, but let's just say, 5 year old Joseph for some reason thought she was laying awfully still so she must have passed away. :) LOL
To his shock, she was alive! I think he was abit relieved too.

I have so very much missed having Dabba close by. I love her deeply and miss her.
I am ever so thankful that she has email and a computer. We are so blessed to be able to communicate this way. I don't know many 88 year olds who get on computers. She is a "Happenin' Woman!"

Joe and Becca were able to visit her in Idaho with Sam not too long ago and I truly hope the other boys are able to see her soon. I know she is not able to travel anymore.

I am so thankful for her being a wonderful Gramma in the life of our boys through a very difficult situation, and now she is truly a gramma to our girlies. She has never met them in person but she keeps up with everything they are doing and I know she loves them.

Dabba was widowed at a young age with 6 children. She has LIVED Christ ever since she met him at the age of 44. She started Family Mission with her Secretary's salary and has done more for the hungry, the homeless, the orphan, the widow, the down trodden, the mentally ill, the wounded, than any one person I have ever personally known.
She paid to have an orphanage started for the handicapped in Timothy's name when he was little. She supported World Vision and they knew her well. I still have vivid memories of the pictures of orphans and children who needed food she supported, and I remember her famous map with all the little pins in it. Those pins represented children, orphans, orphanages, etc. of places she was helping with. This didn't include the immense giving and help she was for her own children. She even took a second job at McDonalds on Saturdays and a 3rd one working in a church Nursery on Sundays.
If I'm making her sound amazing. I'm not touching the surface of what she means to me personally.
I have never had anybody make more of an impact on my life than her. We have laughed together, cried together, resided together, prayed together, taken care of kids together and lived life to the fullest together in the midst of awful circumstances.
I am forever greatful to her and not worthy of her love and devotion.

BUT to her I am forever thankful, forever greatful, forever in love with a person I am proud to call my mom.