The Beverly Hillbillies Come To Wylie

I'm beginning to question if that 5.00 DVD for the first 40 episodes of the Beverly Hillbillies was a good idea after all! Especially after the girls free play this afternoon!:)
I overheard them pretending to cook "rabbit stew" amongst some other strange sayings with extreme southern accents. I didn't notice the rabbit until later when I came upon this: 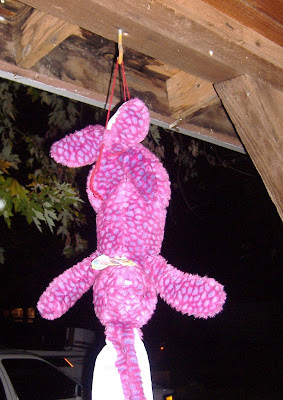 I called them out to ask about Poor Velveteen, as he appeared to be dinner.
They said they had gone "Rabbit Huntin'!" LOL
Posted by Christie M at 5:35 PM