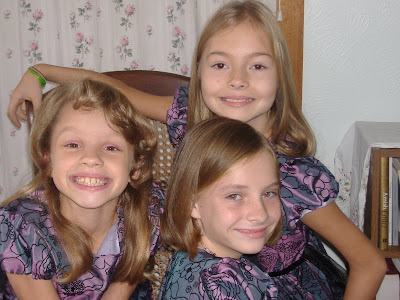 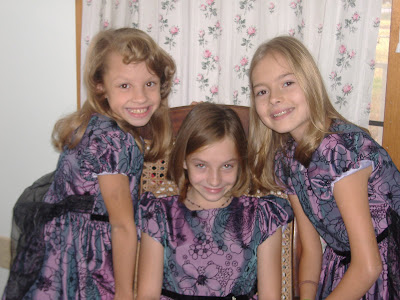 I had every intention of printing this on pretty paper with pictures and mailing it out...... ummmmm it hasn't happened. So sorry. Hopefully we will get a family picture at Christmas. So this is my attempt to send Christmas Cards. LOL

Where did this year go? It seems that it barely started and now, here we are, almost to 2009!
This year has been a year of milestones, a year of excitement and a year of heartbreak.
All in all, it has been a full year of blessing and growing in the Lord.

So take a trip with us down Memory Lane.....


We began our year with a Family Camp at Peaceable Kingdom Retreat for Children. This camp is one of the highlights
of Erika's summer. It is now a highlight for the other girls in the winter as the whole family gets to go!
We had a wonderful time and were reunited with friends we made during the Summer over the past 2 years.

During the Summer, Erika returned to "Out On a Limb Camp" and had a wonderful time. She made some new friends and is eagerly
awaiting Winter Family Camp.
We had a fun Spring and Summer. Katie and Lillian, our grand daughters were able to spend Easter Break with us and we went to
the Dallas Zoo. Each of the girls was able to feed a Sting Ray at Sting Ray Bay! When we go to the zoo, they love to take the train
which stops right in front of the zoo. We acquired 3 new goats this year and some turkeys. The goats are named, "Sweetie-Pie, Joyful and Bryan". We are expecting goat
babies very soon. The turkeys have made it to the freezer. Of course this didn't sit well with Anna who says, she does all the hard work raising
them and I just kill them.

We enjoyed our summer, and we were able to go to the Lake a few times. We also had a fun visit with Joseph, Becca and Sam. They flew in for
a friend's wedding and it was wonderful visiting them. Erika and Sarah turned 10 and 9 in June, and Katie and Lillian turned 12 and 4. Wow, they are all growing up.

Erika was baptized by Daddy in August. She wrote a testimony that she read in front of the congregation before she was baptized. It was really a neat time.
This year I celebrated my 50th birthday by getting my hair cut and donating it to Locks of Love. I donated 14" and I wasn't bald! Just a few weeks
later, Mike and I celebrated our 19th Wedding Anniversary. We took the girlies out for a nice dinner to celebrate as we knew we were leaving a few weeks later for Ukraine.

In late August we received information about a little girl 8 years old available for adoption through disruption. She was also from Ukraine and her birthday was in June too. After speaking with the counselor and the mother for a few hours, the mother told us she had picked up to be the family of this little girl. Then, the counselor went on vacation and we didn't hear from the mother who was supposed to call us the next day. She didn't so I sent an email for information so we could pick the little girl up. The mother abruptly changed her mind and placed the little girl with a different family. She said she didn't want to wait. I was abit heart broken, but knew that if the Lord had wanted her to be with us, she would be. So we rested in Him.
I have thought about this situation a few times over the last months and if anything is to be learned from it, it is that we are open to having more children in our home.

In September we flew Becca and Sam in from D.C. to stay with the girlies while Mike and I flew to Ukraine for a short term missions trip. It was a wonderful trip and we were so thrilled to be able to go back to the orphanage where Sarah and Erika both used to live. We had a warm welcome there and we were so happy to be able to minister to the children in several orphanages and the TB Sanitarium in the Kharkiv area. We also had a quick peak at the Ukrainian border with Russia, but a soldier turned us back saying "Now that you have seen, go back!" Yikes..... but it was worth it. :) I also found out that Dart trains are not crowded at all! In fact they are nearly empty even when they "seem" crowded. If you want to know what it is like to get on a "crowded" train, catch a train in Kiev's metro. WOW! I think I was shoe horned in, and the great thing is you can't fall down because there is no room to move!
While in Kharkiv Ukraine, we were able to meet up with a friend that I only know from the computer. She was there adopting a 3 year old little girl with Spastic Diplegia. When she arrived, the weather was warm, but was turning quite cold and she needed some supplies. We brought some things
she needed with us and met up at a restaurant with her Translator. Her translator was very sweet and had pictures of US and Erika on display somewhere in Kiev! My friend plans to send us a CD of his artwork.

When we returned from Ukraine, we had 1 week to prepare for Sarah to have Surgery. She had surgery to shorten the bone in her amputated leg, and to stabalize the knee. She also had tendon surgery on her arm to help her have control of her wrist which was not functioning. The surgery was successful but the recouperation time has been long. She is just now beginning to walk around with her old leg on as I type this in December.

In the mean time, Erika outgrew her legs completely and is anxiously awaiting new ones to be finished. We are hoping for a before Christmas delivery.


Mike's gramma died right before Thanksgiving and that made us sad. She was 93 and died the day after her birthday. We will miss her.

Uncle Bob came for Thanksgiving this year and we had a good "backgammon filled" visit with him. He has been practicing with the computer!
Erika enjoyed playing Backgammon with Uncle Dave and Jake, Thanksgiving Day, on Yahoo games. Chuck, Jodie, Katie and Lillian also came for Thanksgiving. We really enjoyed having them. Chuck is working hard on his music, getting ready to record a second album, while Jodie works hard at her job. Katie is playing the Oboe in the school band and Lillian is in Pre K.
Joseph and Becca were able to visit Idaho with Sam, to see Becca's Mom and Dad and also Dabba. He is also in Seminary in Washington D.C.
Marcus and Ivy gave us some big news on Thanksgiving Day..... We are gonna be grandparents again in 2009! Marcus also started Graduate School this year for Accounting.

Timothy and Emily have been foster parents and 4 children have gone through their home this year. 1 baby was adopted, 1 girl went back home,
1 girl went to a different home and they are now fostering a very sweet 13 year old boy who originally came to the U.S. from Ukraine. Tim is enjoying substitute teaching and has decided that he really has a special love for Special Education. He has been taking more classes to be certified for Special Ed.

Anna's 10th birthday was on Thanksgiving Day this year. This also marked her 5th year with us. We are so proud of how far she has come.
She was with us on her 5th Birthday 5 years ago which also happened to be on Thanksgiving Day.
I have kept busy with blogging, and have enjoyed reading everybody else's blogs. Blogging is sort of like having a diary without a lock and then there is an invitation sent to come and read all about it. Quite different from the diary's of years gone by. :) The girlies have a blog too so they can learn how to type and have some fun along the way. Mike has an electric car blog too.

Mike's big news is that he is now the proud owner of a totally electric car. It was manufactured in the 1980s and is quite fun to drive around town.

May the Lord Bless All of you this coming year and bring you Peace and Happiness.

The Minich Family
Posted by Christie M at 7:57 AM

What a great summary! I have a feeling that their is another child out there for you!

Beautiful girls! Beautiful nieces!
Christie, I am so honored to be your sister! I am so proud of all you and Mike have accomplished in Christ's name and with Christ's help!

Merry Christmas Dear Sister. :)
I am very honored to be your sister too. Enjoy the grandkids!