What I Learned From Joseph 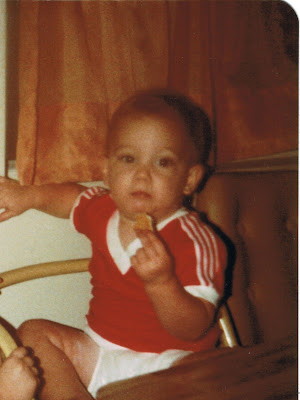 This is Joseph at 15 months. 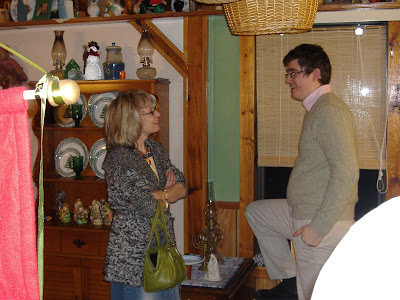 At our home talking to a family friend. 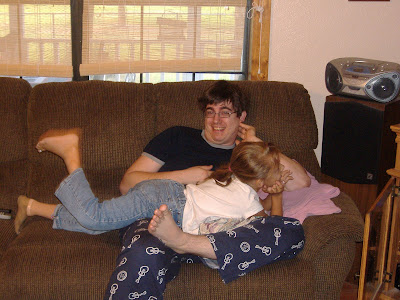 Getting to know little Sister Sarah 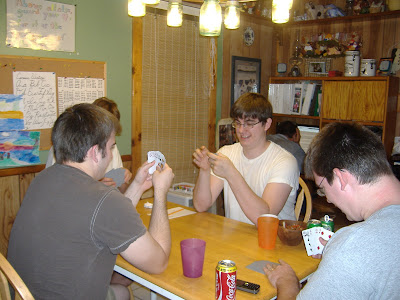 Playing Spades with the brothers

I wish I knew how to scan. That is something I plan to learn in the new year, along with learning how to make links, AND finish my taxes on time. (I don't wish to talk about that) :)

Joseph is our 3rd son. He was born prematurely, at around 30 weeks. He screamed so loud in the delivery room, they figured I had my dates wrong, as that scream said he was fine. However, about an hour after he was born he started "grunting", and had difficulty breathing. This placed him in the special nursery with oxygen and IV's, and our previous experience was visiting us again. (3 of our boys were preemie, all 30 week babies)

I remember when he was just 2 days old, I went to the nursery to visit with him, and I walked in just in time for a nurse to say, "I wish that kid's mother would get in here so he would shut up!" Nice nurse, I know.... BUT.... what was a 2 day old doing to annoy her?

This went on for a few weeks, the latter part of that time, he was used to me not being there the entire time AND he had learned to SCREAM!
I had a 3 year old and a 1 year old at home, and I am so glad he only had to stay in the hospital for a few weeks.

There was something different about Joseph. He was a grouchy baby. He loved being held, but it took a lot of coaxing to get him to smile. He also didn't sleep. Not like the other 2. He was awake ALOT.....
When I took him to the Dr., the Dr. said, "you are just tired. After all you have 3 children 3 and under and one has cerebral palsy and isn't walking...etc.
That one was also having some rare seizures that couldn't be explained and there was a lot going on with him. (timothy)

So, I went back home and accepted that I was tired. Even though I knew that wasn't the case.

As time went on, I studied this little guy. He was anxious. He was very, VERY aware of his surroundings. He would accomplish things like sitting up in a grouchy manner and then be happy when he succeeded, only to get mad when it was time for the next milestone. I noticed he was exceptionally smart. (all mom's say that, but he REALLY was)
As time went on and he could do more, he was a happier baby. He kept himself busy and BUSY he was. He was also very determined and strong willed. He was also very insecure and tender hearted. He would lash out, and throw fits, but be terribly hurt if I was upset with him. Baby number 4 had arrived 10 weeks early, and now we had 4 children under 5; all wonderful little boys.

It took me a long time to figure Joseph out. When Marcus came home, Joseph's reaction was to bite his brother older brother. Every morning, EVERY MORNING when I bathed the baby, Joseph put trucks in the baby's crib and then tipped the crib over on its side.
He knew I was busy, and wouldn't catch him in the act, and he was only 15 months old!
But somewhere around 3, I realized that I had to parent him VERY differently. The standard stuff just wasn't going to work with this child. He needed me to be 10 steps ahead, in control, kind, resourceful and prepared. He needed me to outsmart him AND be tender with him. It was a difficult task. Even though I knew he was quite smart, he talked later than his brothers, he walked later, he wasn't potty trained and he still had a terrible temper.

I remember thinking one day, "This child is either going to be the Apostle Paul, or he is going to wind up in Prison." I kid you not.

I pledged to do everything as a mom to the Lord to help him succeed.
Really, to help them ALL succeed, but after he kicked my mom in the shin, I was on my knees about THIS ONE. LOL

As I began to pray, the Lord showed me that there were many things I was doing wrong.
I wasn't being tender enough. I was "man handling" him in a more controlling way. He couldn't handle that. I was also reading books that were not helpful. I remember reading the "Strong Willed Child", and after reading that I thought, are you serious?
He is WAY beyond that! If I followed those instructions, it would do NOTHING but serve to make him angrier and we would accomplish nothing but a battle.

Needless to say, I heard many words of advice, invited and uninvited. My mother in law had the best words. She loved him unconditionally. One day as we were talking, she said, "I think he is afraid".... I pondered that for a while.

When I thought about how I would parent a brash, boorish, rough, tenderhearted little boy who was AFRAID; I began to get somewhere with him. His behavior turned around so fast I was shocked.

As I looked back on his first few years, they were hard. My marriage had fallen apart and there was reason to have fear in our home.( I could write a book on this one, but I won't) He was born and mama could not be there. (I believe this is where it started: Read the Primal Wound by Nancy Verrier)
I know he "felt" unstablity in our home, and I felt it was my fault.

As circumstances changed for the better, this little guy emerged like the most wonderful blessing in my life.

Now, I am not a perfect mom and never have been. Sometimes it is uncomfortable to type these things because I'm typing about my own family.... but if it can help one person to possibly see something they recognize, that is whey I do it.

BTW- Joe didn't go to prison. He is in Seminary now. He is married with a son. He is still very smart, and he is FUNNY and WHITTY and talented and I just love him.
I am so proud of him. And now, it is his turn. :) 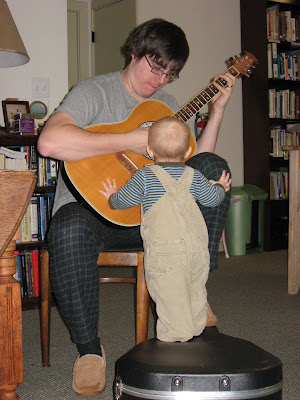 Thanks. I really really needed to read this today. I have a fearful child and sometimes the actions are sooo maddening.

PS: would you sometime comment about teaching kids to be thankful for what they have and not be obsessed with what someone else has that may be nicer? Is this only taught by example? Is it just human nature? I'm talking a blue streak, but making no impact yet (5 year old). Maybe I'm expecting too much.

Thanks for visiting my blog. I would love to post on this.

Wow that is scary and encouraging all at the same time. =) I always love to hear you talk about Joseph. It makes everything become clear. =) love you, Mom! Thanks for all your years of hard work... I have one really great man for a husband.