One of the things we were discussing today while watching the inauguration was transition of power. We talked about how in many countries in the world transition of power is brought on by force, by war, and the previous leader may be imprisoned or executed. The girls watched a picture of the new first family and the old first family embrace and the new first lady give the old first lady a gift.
We talked about how a very powerful leader, just willingly walked away from his office and handed his authority to the new powerful leader, caused by the will of the people in which he leads. Whether you like the choice of our new president or not, it is an amazing thing to watch.

So far the most exciting part of watching the inauguration has been when they showed a little boy near the Washington Monument doing the exact thing Sarah was doing from the comfort of her own home. Watching the Inauguration with a Periscope. :)
"Look Mommy! He has a periscope just like us!" :) 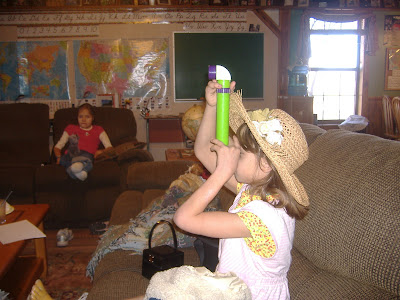 We were watching the car pull up with George Bush and Barack Obama. I told the girls, if that were me, I wouldn't want to get out of the car! What a responsibility!
Then I asked:
What would be the first thing you would do if you were in office?

Sarah: I would have a PARTY and get 4 dogs and feed all the poor people.
Anna: I would work for animal rights and endangered animals. People use fossil fuels and destroy animal habitats.
Erika: I would make it cheaper for people to fly here from far away.
Mom: I would make it easier for people to come to our country, who want to be a part of America and be a part of this great country. Most of us descended from immigrants after all. :)
Posted by Christie M at 7:07 AM

What are the chances of Sarah seeing a periscope?! Great minds think alike! (Was Sarah pretending to try to be in DC looking above the crowds???)

My hubby is home with a really bad cold, so we got to watch our son's 1st "rememberable" Presidential inauguration as a family. (What part of speech is "rememberable", BTW? or do make-believe words have one???)

It was funny. The news anchor pointed out the little boy with the periscope. It was exactly the same one Sarah was using. She was quite excited about that. :)
Sorry your hubby is sick.:( But it is an eventful day. I'm glad we could all watch it together.