Pride Cometh After A Fall

We had a great time at camp. It was short and full of adventures. I learned a very good lesson over the weekend. Don't try to race an electric golf cart up a hill on a trail with rocks lining it. You will lose your balance, get your foot stuck between rocks, fall on those rocks and then tumble down a little ravine. (for lack of a better word) And all in front of a bunch of people.

So that is what happened. I was so embarrassed that after I was helped up by a very nice man named Dwayne, whom I fell right in front of. I tried to keep running. I wanted to run away. After about 50 more steps that turned to a limp, and then I caught up with Mike. By then it was hurting pretty good. We went to the lodge where I removed my shoe, and haven't been able to get it on since. We went stayed at camp as it was Saturday afternoon and we were leaving in the a.m. anyway, and the kids had a great time. Then we drove home and went to one of those cheesy x ray places.
The verdict was: "There is something on your x ray. It looks like your foot has a fracture, but the radiologist won't be in until tomorrow so don't stand on it at all. I'm thinking, "No problem there. I CAN'T stand on it at all." LOL

So I am getting a lesson that is only going to give me more compassion for my girlies. It is a real pain to not be able to do things. Trying to get up on one foot to crutches is painful. My back, hip, knee and everything else hurt too.

AND.... my "oh so compassionate" Mike says,"You aren't 20 anymore!" Thank you for reminding me of that. I don't know what I would have done without that information. :)

I am so thankful this didn't happen 2 or 3 months ago at our height of limblessness. God is so Good to us.

I'll upload pictures of camp as soon as I can get them organized, but here is one of me in the lodge. 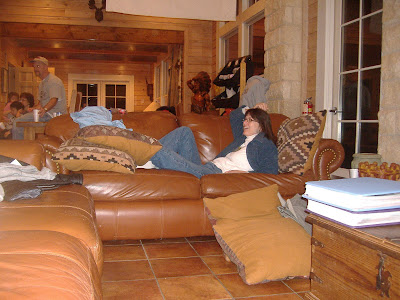 Alas, even in pain, your style and beauty shine through. I am so sorry you hurt/broke your foot. I don't think you needed help empathizing for the girls, but this experience, no doubt, does kind of put the proverbial shoe on the other foot. OUCH! (Neither punny nor nice.)

If you need anything (like crutches, etc,...) I'll see if we still have a pair. I made 3 pans of lasagna and froze them, if you would like some for your family. Sorry, but it is not gluten or dairy free.

Thanks Julie... I have crutches here thank goodness! I just got a call from the doctor's office and they said I fractured the 5h metatarsal bone.
Yep, that is the one that looks like it is fractured. :)

Oh no, I am so sorry! Ge well fast! Your girlies need you! (but enjoy the down time if it is possible)