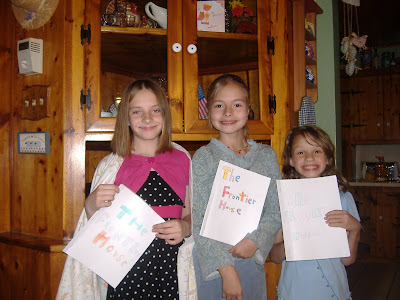 Most of ya'll probably know that I LOVE history. I didn't know I loved it until I started teaching it. It is a crime to make history boring, but that is what I experienced during my growing up years, with the exception of 4th grade.

We have been studying the Westward Expansion, which included The Oregon Trail.
As part of our unit, I included the PBS series called Frontier House.

The series is not for little kids, and discresion is needed as there are some issues of morality, but there is also much value to the series.

I decided to let the girls watch and use some of the objectionable material to promote discussion. Everything went really well and there were numerous issues that came out of that series, not necessarily having to do with history, but having to do with marriage, roles in families, and what is truly important.

I also had the girls do a paper on the series and write about each family, and if they would like to have lived back in 1883.
Their paper required a Cover, Title page, Map and Drawing along with a report.
They started last Wednesday and finished yesterday and today. I am so proud of them. We did a first draft, then second, then third, and some did a fourth and probably need ed a fifth but mommy is a merciful mommy and decided not to push fate. :)