Easter time is such a great time to reflect. You know, I have hearing a lot about the Power of the Cross, but I think where the power really lies is within the Power of CHRIST, not the Cross. God Raised Him from the Dead! That power was so immense, that the earth shook, the vail was torn in two from top to bottom exposing the Holy of Holies, and FOREVER, we have access to the throne of God, ourselves with no intermediary. THAT is amazing.

Last year we made a mud tomb and stone rolled away thingy.... This year we got creative and made it out of pudding and crushed chocolate oreos, with a few caramels for rocks. We even had Peter, John and Mary Magdeline peering in the empty tomb. We made a stone out of a chocolate easter bunny with his ears cut off and a little extra trimming :) 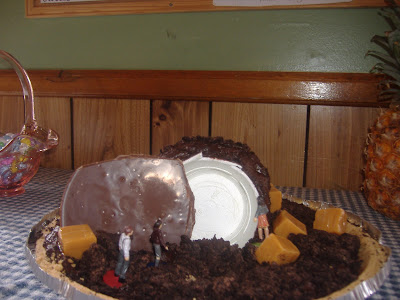 Unfortunately the ants discovered our tasty treat, so nobody got to eat it.

Here is a picture Sarah took of me in the a.m. 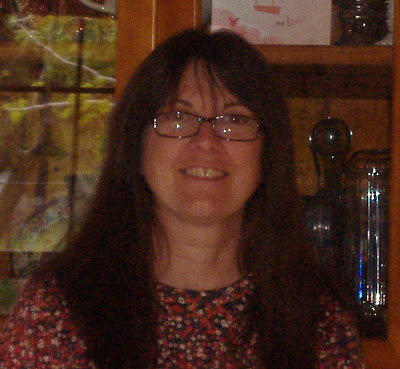 Here are a few of our afternoon egg hunt. We had 3 other families over... 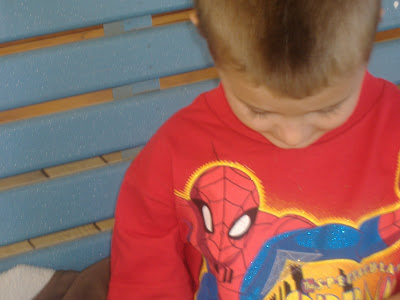 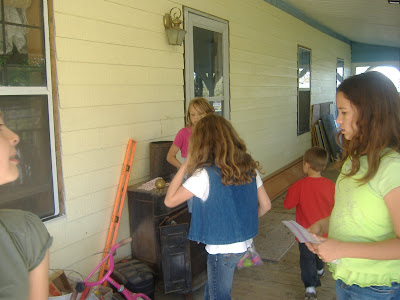 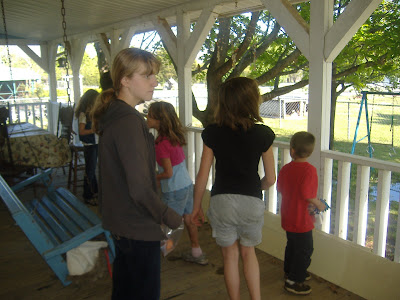 We had to have our Egg hunt on the front porch because it was so muddy from all the rain.

Sarah helped me prepare the afternoon lunch while everybody else was still at church.
We sat down together after getting things in the oven and went over the 4 gospels and the verses that covered the resurrection. Each one explains things differently and with different detail. I explained to her that when different people hear of something, or are involved in something, what they recall may be different, but the facts that stand out are the same. There was no question that Christ resurrected from the Dead. There was no question that he appeared to the disciples.

But one passage really struck me, especially for those who do not believe Christ died or resurrected.
It was "Mark 15:42-45"
And when evening had come, since it was the day of Preparation, that is, the day before the Sabbath, Joseph of Aramethia, a respected member of the council who was also himself looking for the Kingdom of God, took courage and went to Pilate and asked for the body of Jesus. Pilate was surprised to hear hat he should have already died. And summoning the centurion, he asked him whether he was already dead. And when he learned from the centurion that he was dead, he granted the corpse to Joseph.

And then continues to story of how he was laid in the tomb. Guards guarded the tomb so nobody could steal the body. Matthew 27:66 SO they went and made the tomb secure by sealing the stone and setting a guard. (meaning guard of soldiers)

The sealing of that stone was an official government seal. Nobody was allowed to break it.

Matthew 28:2-4 goes on to say : And behold, there was a great earthquake, for an angel fo the Lord descended from heaven and came androlled back the stone and sat on it. His appearance was like lightening, and his clothing white as snow. And for fear of him, the guards trembled and became like dead men.

Matthew 28:5-6 says, But the angel said to the women, "Do not be afraid, for I know that you seek Jesus who was crucified. He is not here, for he has risen, AS HE SAID.

Jesus is either who he said he was, or not, which would make him a big liar. And a Liar CANNOT be a prophet like some religions claim. He could not be a "good teacher" if he were a liar, as others claim.

I believe He was who He said He was. The Son of God; I AM, ONE with the Father. Fully God and Fully Man. Without Sin...the PERFECT representation of the Father.
Posted by Christie M at 9:14 AM

I loved your candy tomb, maybe we will do that next year, though we will have to watch for ants, since I have boys who would eat it ants and all! I played Mary Magdeline in our church production this year and my lines were pretty much all straight scripture so it was an awesome oppotrunity for me for study more and memorize more as I got into character. It made the season so much more special. Have you ever done the empty tomb cookies? They are made with egg whites and left overnight in the oven. I have the recipe somewhere. This year we got home too late on saturday to do it, but my older boys really missed it so we may do it late or something.

A friend of mine posted the recipe on Facebook. It looks like a great idea for next year. :)