We happily attended the Annual Home school Book fair in Arlington Texas today.
I have gone nearly every year but 1 since 1992. It is amazing how much is still so familiar, how we see the same faces year after year, and then we get to see new faces.

This year, was a new face, but his books are not new to our family.
John Erickson started writing Hank books a long time ago. When our son was in 5th grade, I was still having trouble finding things for him to read that he really would love. He had dyslexia and struggled with reading. Our other son, had brain damage and he too struggled with reading.

One thing we would do was before starting a book was to see if there was a movie or a tape that could help the kids get an idea for what they were reading, thus giving them that extra picture in their minds would help with comprehension. That was the idea anyhoo.
It seemed to work great. I found a Hank book at the book store along with a tape. We listened to the tape first and found it to be quite funny. Then our son read the book.
Then something magic happened, be begged for another one, and another one, and before I knew it, he was willing to spend his OWN hard earned money on another one!

27 books later, his reading had so much improved, he could read anything, but I truly have Hank to thank for that. :)

Today, Mr. Erickson talked about his popularity among special needs students including Autistic children. He said he constantly gets letters from greatful mothers and teachers telling him the kids wouldn't read, but they will read this!

I found his observations very interesting. He said,he couldn't figure it out, and then a mother of an autistic child said, my son loves your books because they are orderly.
They all start with the same words; "Its me again, Hank the cowdog!" They all have 12 chapters, they all end with the phrase, "case closed". It made perfect sense to her, why her son would love his books. :)

Our daughter has dyslexia too. Guess what she LOVES to read more than anything? Hank.
hmmmm. I'm seeing a pattern here!

Of course today, Mr. Erickson gave his testimony, talked about how all his books are observations of life on a ranch while he was working his way through seminary. Hank makes loads of mistakes, but always pays for them. If he does something good he is rewarded. And I thoroughly enjoyed his seminar.

I might add that he was saddened that his first books were used for a cartoon and the books ruined. He said the cartoon does not reflect his books at all.
He said he learned alot from that mistake and won't make it again.

Our son stopped at number 27. There are now 53 and counting. And now there is an official Hank Website, full of fun. :)

As soon as we got home, the girlies found their favorite reading spots and Hank became alive in their little imaginations. :) 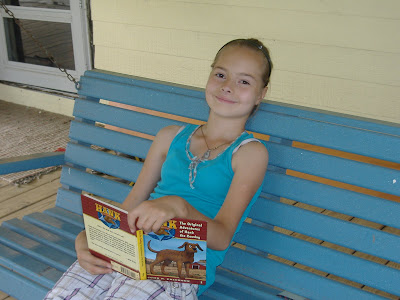 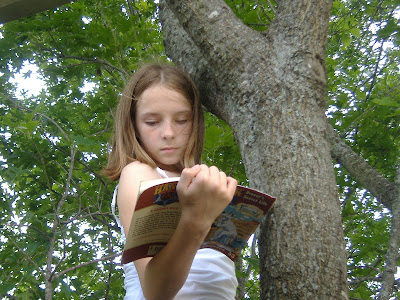 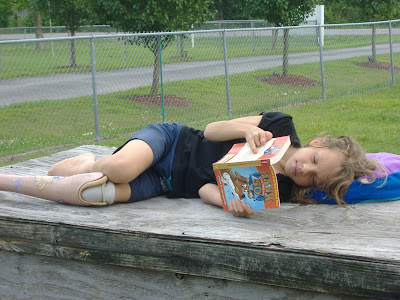 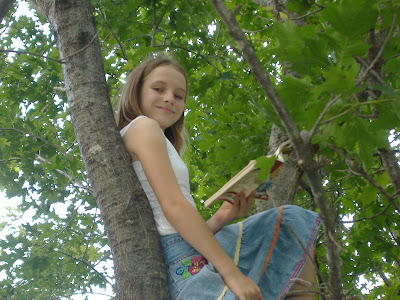 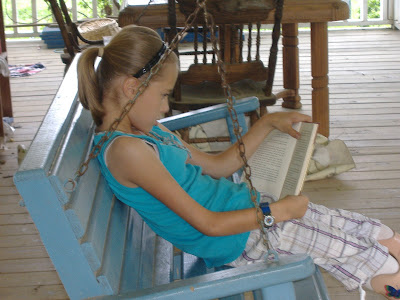 Did I mention, it is unbearably HUMID and quite warm here? UGH! SAUNA!
Posted by Christie M at 3:43 PM

I love love that swing! What a nice yard you have to hang out in. :-)

Sounds like you guys had fun at the book fair. Glad you and your girls got to meet the author! That will be a lifetime memory, for sure.