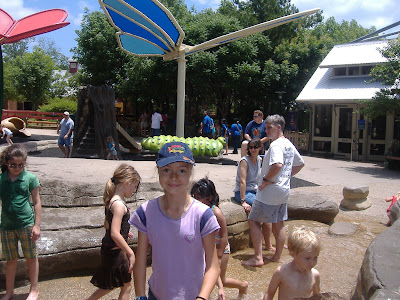 We had an interesting day. I took the girlies and my grand daughter on our annual zoo trip.
We love to take the train to the zoo, as it stops right in front and we don't have to drive in traffic.

So, we set out this a.m.
The train has a special platform for the handicapped so they can walk onto the train safely without going up stairs and right by the entrance/exit there are roomy seats for those like Erika, who don't bend, or for wheel chairs.

On our way, the driver was cheery, and sweet, welcomed us onto the train and Erika sat in the front seat where she could fit comfortably. There was a nice man sitting next to her and he offered to move, but I said it was fine, and I sat a couple of rows back with the other kids.

I caught glimpses of them talking while the train was going, but didn't know what they were talking about. She was smiling and engaged in conversation and seemed quite comfortable. About 30 minutes into our trip, the man and his family got up to leave and he turne with tears in his eyes and said, "she is one special little girl."

Erika later told me that he was adopted too. :-)
So they must have touched on that subject.

We had a great time at the zoo, then our trip home was in stark contrast to the trip on the way.

First, we endured a very agitated train driver who shouted out, "I don't see a handicapped person here!" Erika cheerily said, "I must have been hiding!"
He quickly apologized and I thought to myself, good grief guy, there are many handicaps that cannot be even seen, like heart issues? Hello!

So she sat in the front once again, and we sat behind her. Then came the man 4 stops later in an electric chair. He saw her sitting there and rudely demanded she move! She struggled to get up and move over to the other side, where he could have gone, and he apologized and said, "I didn't know you were handicapped". I held my tongue. But I could see she felt humiliated.

So, we got to our last stop and our driver already knew where we were getting off. He pulled up to the ramp and about 4 business people who were standing at that exit became annoyed saying "why is he doing that???" We were stuck behind them, and so I did say, "maybe because somebody needs it?" They all rudely left.

The driver really was sweetly trying to make up for his tyrade from before and we joked with him and apologized for not bringing him cotton candy from the zoo.

When we got into the car, Erika and I looked at each other and I said, "That train ride was exhausting!" She agreed.

And then, we both agreed to remember the sweet man on the way, and forget the other ones on the way back.

I just love her ability to roll things off and concentrate on the good. :-)

I truly hope that as she gets older, we can continue to instill that attitude in her and in us.
That man is right, she is one special little girl :-)
Posted by Christie M at 5:15 PM

Ahh Christie, that was such a great story! I'm glad your ride to the zoo was wonderful, and I'm sorry the ride back was not so-- but I love the attitude! I hope I can instill that in my children with or without handicaps.

Complaining to my agency's owner once about the school secretary, my boss floored me by stating she felt sorry for those people. Instead of her intervening, she had me praying for this lady! The change in my attitude freed me to love this secretary, whose antics ceased to bother me.

Please give Erika a hug from me. Tell her that God used her to teach a few adults some much needed lessons. What an honor!