Erika had another fall. She is falling way too often for comfort. :( Every time she falls, because her joints don't bend, she is like a tree falling and it is scary.

Well, she fell; typically there is no injury. It is hard to tell sometimes because her joints don't look normal, and she doesn't hold her hands normally. This time, she fell and tried to catch herself with her arm, but it jammed her fingers.
We put ice on it, and put her to bed with some tylenol, and then this a.m. it was a little more swollen. She can move her fingers, but they hurt. I am suspecting she may have a fracture in her hand because of swelling.
So we put more ice on it, and I called Care Now, to see about an X ray. I did the web check in , and so far haven't heard back!
So I called our personal doctor's office, and he has left practice. His replacement isn't there yet, and the nurse was unsure of where we should go to get an x ray. She said, "you can come in and see the PA, but she'll need to send for an x ray, but I don't know who we are going to use now, everything is different. " That makes me feel nervous, as this is our doctors office we all use!

So I called our Orthopedist's Nurse and PA, at Scottish Rite Hospital because Erika has an appointment with the Orthopedist at 8:30 tomorrow a.m. She asked some questions, and then said, "if you go and get x rays, chances are, they won't do anything but splint it until tomorrow anyway; do you have a splint? I said YES! She said, elevate, use ice I'll set up an x ray for you first thing here, and then we'll see the doctor.

OH MY GOODNESSS! Thank you so much GWEN! She set my heart at ease and told me not to worry. But I do worry. I feel like crying. I hate it when the kids get hurt. I hate it worse when I don' know what to do.
An emergency room visit would have been silly; as by the time we got out of the one we would have gone to, it would be time to see the doctor in a few more hours.

If she hadn't had an appointment already, I probably would be at the emergency room with her. And then, they'd say , "What does she have?" "What is that?" I've never seen anything like that before.... etc. etc. and then they'd say, "She needs to see an Orthopedist. LOL do ya think???

Can you tell we've been through this before. :) 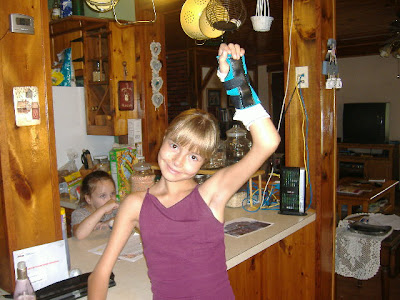 This last incident is making me think over having a doctor more locally, that we can interview AND educate ahead of time. I do know of a great pediatrician who knows us well because of Out on a Limb Camp, but he is almost 2 hours away. I have seriously thought about using him though, because he understands what Arthrogryposis is.
But, we also need a new doctor for the whole family. I have heard there is a D.O. doc not far from us that is into both nutrition, alternative and traditional medicine. That might be the person we need to investigate to see if he is a good fit.
Posted by Christie M at 12:47 PM

I so hear you... I have been there with a child or two...So glad you will get it resolved in the am.. Our Luke has arthrogryposis and is a crazy man. Fortunately he has not gotten hurt but he did start out life with lots of difficulties. We have used the Shriners in Philadelphia and they are wonderful.. but we now go to our miracle doctor Standard in Baltimore... I can't help you in Texas but if you ever get this way and need someone he is terrific. She has such a sweet smile while she is elevating her hand... praying it is an easy fix for her.

Aww...That's almost as rough for the momma as it is for the patient! I'm so glad she has you. :-)

I hope she's feeling better in no time!