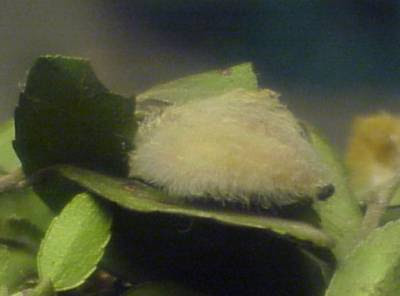 I sent the girls to bed. All of a sudden, Anna brings me this weird looking little creature that is stuck to ERIKA'S Underwear. She was putting on a new pair of undies before bedtime, and felt a "sting" on the back of her leg.... she quickly took them off and Anna picked her undies up seeing this odd looking creature.... She touched it and felt a "sting" on her finger!
She brought it to me saying, "Look at this mom, it is really wierd. It stung my finger!" Not telling me that Erika was stung on the leg.....

I flung it into the trash can and didn't think anything about it. I wasn't even sure if it was a real thing. It looked almost like a gummy worm. :/

The next thing I know Erika is calling saying her leg hurts. I asked her why ? She said, that weird thing!!!! She said pain had radiated to her groin!
WHAT??????
So I dug the little creature out of the trash and Mike ran it next door to the Pest Control fellow who gave us an emergency spray for her.
He didn't know what it was either.

I looked up online, "Stinging worm thingy" and came up with the exact thing I was looking for!
Yea! It described exactly what happened and said that this thing is the most poisonous caterpillar in the U.S.A.!!!!!!

I was freaking out..... by the time I got back into the bedroom, Erika said her leg was feeling better and Anna was fine. I am SOOOOO Glad they did not try to smack it or squish it, as that would have caused them more problems.

Now I'm going to be checking EVERYTHING!

One time Sarah got a bite on her bottom from a "Solitary Bee" that was hiding out in her underwear drawer! LOL

I checked out a website about this Puss Caterpillar and Texas just happens to be their main hangout, AND October seems to be the height of their existence.

Well, NOT HERE! The exterminator guy is coming over tomorrow to rid us of unwelcome guests who sting and freak us out!
Posted by Christie M at 8:01 PM

Hope everybody is OK this morning...Anna, Erika, AND Mama. What a night!

Today, however, is a brand new day!

We are all fine, though I must say there is excitement next door at the Pest Control Business. They have found something new they had never seen. :)
We gave it to them in a zip lock bag.

They asked how we figured it out and we said, "GOOGLE!"
"wormy, stingy, thingy" is how it started. from there a blog and from there found the real deal based upon somebody's blog!

And then we had the right name and did some research.

I'm on the lookout now! A mom with a mission! No Puss Caterpillar is going to harm my kids!

What did we do before Google! LOL! Glad everyone is okay.

I am sorry but, your story made me laugh... I am glad everyone is fine. I have never seen one like that... I agree with De, I use google all the time.

Wow, that is creepy!