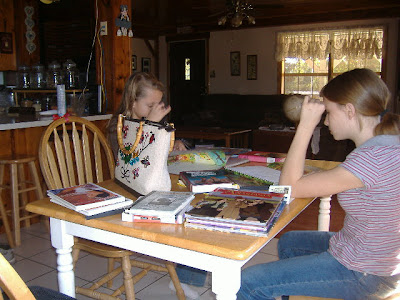 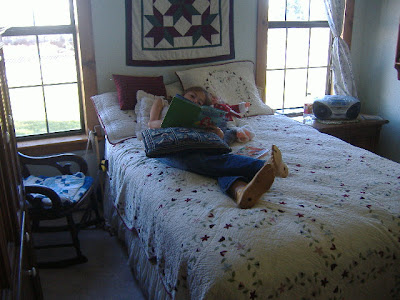 I took the girls to the library today. It had been a while . Last time I had to go with lists, because they still had the flu. Yesterday, our regular library day was cancelled because the Library was closed, so today was the day....

After that we went and purchased 3 money jars so they can collect loose change and save it.
I like money jars, because you can see the money and it is fun to collect and try to fill it up over time. While we were at Target, apparently a man thought we were an amusing bunch of beautiful women to behold because he was staring at us and literally knocked down an entire rack of clothing~ ! LOL
I told the girls not to stare at him, as I'm sure he was embarrassed and we moved right along.
I probably should have helped to offer pick the clothing up, but frankly, I just wanted to get outta there.
Then, for no apparent reason, Erika fell down, in the store. She was holding onto the basket, but said she forgot to walk, and I was walking. LOL So, she is on the side of my body with the very sore rotator cuff problem. I tried to grab her on her way down and then I was in extreme pain. I slowly let her down to the ground and then I was grabbing my shoulder, while we all stood there an laughed. This very nice lady helped her back up.

So, after we regrouped, we decided to head for a taco. Anna suggested we make room in the restaurant by her standing on a table and announcing she had the swine flu! That really didn't seem such a great idea, and there were tables available. LOL It sure got a laugh out of Sarah imagining the entire place clearing out with Anna standing on a table oinking. :/

We then had one of those conversations about staring and self consciousness. Sarah is very self conscious right now. She doesn't like looks, and it is something she will have to deal with all her life. Logically she knows that people don't mean harm and those who do are ignorant. But it is still hard.
I was able to tell her about her Uncle, who struggled with kids staring at him, after his hand was blown off, and how he couldn't leave the hospital until he could find humor in hand jokes.

It is something to work on. Erika went through this last year. I remember our son going through it too.
I guess it is Sarah's turn. I just hate to see the kids hurt, but that is part of life.
I did tell ALL of them on the way home.
"Do not let an ignorant or rude person waste ONE MINUTE of your life, or effect what you do!"
Life is just to precious to give another person control like that.
Posted by Christie M at 1:15 PM