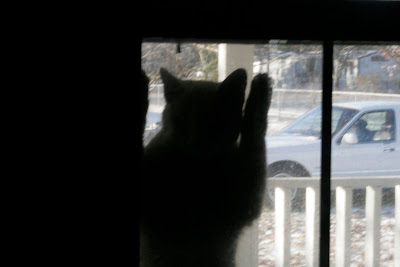 He was always looking in, longing to play with the girls, and the first thing they would do in the morning, and with all their spare time, was to play with him.
He also visited the auto shoppe regularly, spending time with Mike in the office and while he was working on cars.

Last night, Mike went somewhere, and apparently, when he was getting in the van, Mr. Kitty Winkle got in too; which was a bad habit of his. He just wanted to go somewhere! We always caught him and told him no-no, but he didn't understand.
This time, he stowed away, and when Mike opened the van door, he jumped out and ran off.
It is only about 2 miles from the house, where he ran off and of course, Mike feels awful about it.
We are hoping he makes it back home to the girlies and we have an "Incredible Journey" ending. That would really be great.
Anna is holding out hope, Erika has been sobbing and Sarah was crying. I'm figuring, he will wander until he finds a place to be comfortable and that will be it.

So, our life with Mr. Kitty Winkle was great fun and adventure. Maybe he will be thankful that he never has to wear a dress again. :) I already miss him. :( 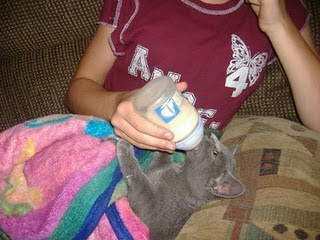 This is one of my favorite pictures of him. He was about 6 months old and already living outside on his own. He loved coming in for a bottle now and then. I couldn't believe a cat would lay on his back and hold his paws up like a baby to drink a bottle. :)
Posted by Christie M at 3:15 PM

I am SOOOOOOOOOOO sorry to read this! I will be praying for a happily ever after to this story. HUGE {{HUGS}} to you all!

Oh, BIG bummer! Cats are pretty smart though. They have a pretty amazing sense of direction, too. And, Mr. Kitty Winkle has already proven he's a survivor. So, hopefully you will have a happy ending.

Oh! How Sad for the girls! (And you) They can certainly hold out hope. Two miles isn't all that far really! I know I am hoping for you!