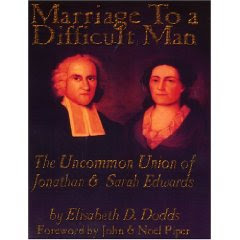 Every year, ever since I was a young girl, I have made "New Year's Resolutions"... I'm not sure how it started, but it has always continued.

Often times I have heard folks say they don't like them because they can never keep them, or they are useless, or they are fleshy.

But I really like them. It seems that if you have no goal to aim at, you will not hit any target; yet if you at least have a target to aim at, you just might hit it, or come close, which is much better than not having a goal at all.

In the back of one of my favorite books, "Marriage To A Difficult Man" the uncommon legacy of Jonathon and Sarah Edwards, but Elizabeth Dodd, Mr. Edwards 100 resolutions are written.
(For those who aren't familiar with Jonathon Edwards; he was a famous Puritan Preacher who lived in Connecticut before the American Revolution. He ministered to the Indians at one time, living among them, and eventually died from volunteering to get one of the first Small Pox vaccinations, which resulted in him getting small pox and dying.) By the way, the title of this book is very misleading.

Last year, my New Year's Resolution was to have all my filing done on time every month, and file as things came in, so that I didn't accumulate a pile. That lasted until October! Then, because of physical troubles, I couldn't keep up, but I was able to finish on New Year's Eve.
Because of that goal, I learned alot about trimming my filing time, what categories are most important and the joy of "keeping up" and not having a terribly messy desk!
(that was until October)
This year, I am even more motivated to do things in a way that will help me to save time and stay on top of things, making them easy to find if I need to.

I have a few new resolutions....

I would like to spend more time in prayer. Not the kind where you bring a list to God, ask him for things and then sign out. I want to be bathed in prayer this year. I want to commune.

I would like to spend more time in scripture, not just for study, but for enjoyment.

I would like to spend more time on personal writing and actually FINISH something. :)

I would like to be successful with my personal diet; and help my family convert from
meat eaters to vegetarians who also eat fish, even though it DOESN'T taste like Chicken.:)

I would like for Mike to go grocery shopping with me, to help me stay on track and not buy
anything we don't need.

I would like to figure out a long term plan for financial freedom.
Posted by Christie M at 4:52 PM

Yay! These are great and very realistic resolutions. You almost want me make resolutions next year.

Count me in! Except maybe for grocery shopping with hubby. Mine enjoys shopping! Kind of like that show "Supermarket Sweepstakes" Just kidding!!
Your sister, Jodie