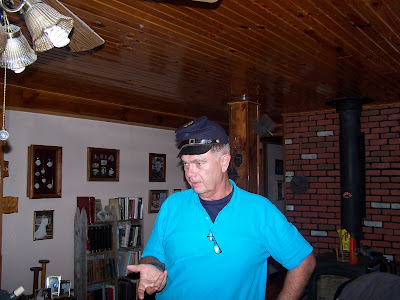 Our friend Hal Tait visited us on Thursday night. He spent the night and then left for Killeen Texas to visit his family the next morning.

Hal, is really a nice man. He went on a missions trip to Ukraine, back in 2001, and he met our Sarah. He has been going back every year since.

Hal was personally responsible for our Sarah coming to the United States.
You see, when he met her, he held her. And after he held her, she didn't want him to let her go. She clung to him, and then had to be pulled off of him. This was at the TB Sanitarium. She was pulled away and put in a crib and he said her wails, those desperate wails, made him cry. He couldn't get her off of his mind. When he came home to America, he took her picture and made a flyer and every where he went, he shared her story. All he knew about her, which wasn't much, he shared.

He came to his son's church in Texas, and shared about her, and a family's heart was touched. They applied to adopt Sarah. She came home to America on her 5th birthday.
And many of my readers know, she only lived with that family for 10 months. Her adoption disrupted.

As Hal was sharing with the girls how Sarah clung to him, she was grinning. He told her how happy he was that she was happy and healthy and safe..... and how God had orchestrated everything.

I was thinking about that. Even though, Sarah's adoption did not work out, with the other family, I am so thankful that they went and got her. Had they not, we would not have Sarah OR Erika. We would not have thought to go to the other side of the world. It is true. We wouldn't have. Ukraine was not on our radar screen. But God......

I am thankful that this family went. I DO believe that God inspired them to go. I do believe they did the right thing. And while, I do not understand what happened, I know they have learned just as much as we have about trusting in the Lord in very difficult times.

The important thing is, Sarah is HAPPY! She is healthy and growing and blossoming. Had they not brought her here, she would not be.

Disruption is a sad event. It is traumatizing for the family and the child and for the new adoptive family. But.... it is not the end of the world. It just might be the beginning that is needed for total healing.

I often think about Sarah's old family. I feel sad that they do not have the joy that we have with her. But I also think that they can say that they did a good thing for her in bringing her here, and also, in realizing they were not the parents she needed.
That is a very brave thing to think.

And Mr. Hal, when he gets home, said he has some very special pictures to send us of Sarah when she was in the TB sanitarium and met him for the very first time. I can't wait! :)
I'll post them when I get them. 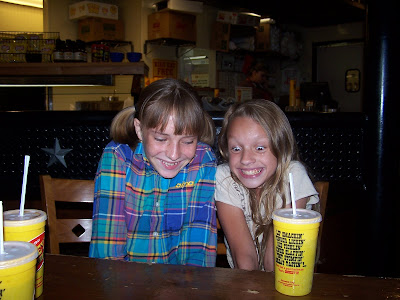 We took Mr. Hal out to eat, and this is the girl's reaction when they heard him talking about a "girl friend". :)
Posted by Christie M at 8:17 PM

I love how the Lord works His will...I too am so happy for the way it all turned out. What a sweet and precious testimony Sarah has already to tell.

Disruption is the thing most likely to make me think of that old truism - "God writes straight with crooked lines."

What a blessing to have him as a friend! I have heard about him from various people, he really sounds like a wonderful man!

Plus getting the picture... Awesome!

(And yes, I am humming Our G-d is an awesome G-d, the original Rich Mullins version... because He really is!)

If it were not for Hal, and the events that followed, we would not have met this side of Heaven!