I have to say this.  We applied to adopt our Anna, 7 years ago, and found out, that we would be her parents not long after our application was confirmed.  We had applied in August, and our first visit with her alone was in September.

Anna has many "anniversaries" in her inner clock, that seem to have come to haunt her every year. 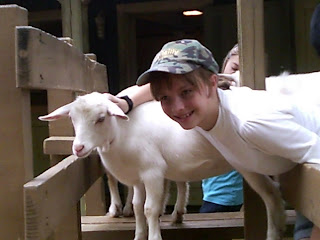 August has always been a traumatic month.... she was moved in August more than once. Her most traumatic one, was when she was removed from her mother.  She remembered the police taking her away and for many years she was afraid of the police.
August would always bring up conversations about police, her birth mother, her memories, and it always seemed to be combined with inner turmoil.

Her other anniversary was Christmas.  She was removed 2 times during holidays. One of those times was to come to our house. It was December and she was so scared that Santa Clause wouldn't know where her new home was.  I remember her worrying so much, and no matter how much we encouraged her that He knew, she had a hard time sleeping on Christmas Eve that year.

All of these years, we have learned to read the bumps in the road with her, according to her internal memory/anniversary.  It seems that keeping that in mind, secures one's compassion to get through behaviors that otherwise seem more like plain rebellion.  But when looked at through the lens of the child with a trauma background; while it may be a rebellious act or snotty attitude, there is something much deeper behind it.

That does not mean, that during that time, we wouldn't use correction and instruction and lots of deep breathing to get her through, and us through.  But it does mean, that our focus and direction were that of restoration and healing, not punishment and relationship abandonment.

We have made some amazing strides this year with all of our girls.  They are becoming young ladies and the hormones are flowing, and the "dread" that I have heard so many moms speak of, is .........
just NOT there.  DID I say that?  I am NOT dreading the teens?  YES I did!

I didn't dread the teen years with my boys, and we do not have any plans to dread them with our girls.
I love teenagers, and I LOVE tweenagers. They are just so cute. They are discovering all sorts of things about themselves and about life. 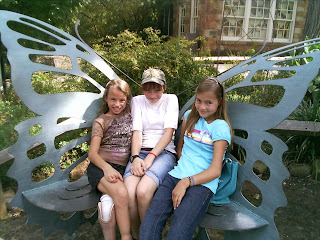 SO, back to Anna, and really all 3 girlies.
I am AMAZED at them. Not only did we not have an anniversary/internal clock issue with Sarah or Erika in April or May.... we did not have one with Anna in August or September......
In fact, the months passed and I was waiting.... and breathing..... and I just got to see them blossom.
Wow!  I shed tears of joy to see them loving each other, loving us and loving God.

I have seen them pull together as sisters and really enjoy each other's company so much.
It is a relationship that I would have treasured among my sisters.   Our boys have a similar bond, and are very close. I am so happy to see that bond being forged with the sisters too.

For those of you who are skeptical about using methods like BCLC (Beyond Consequences Logic and Control) consider that Relationship is placed in utmost importance.  Relationship FIRST.
What I have seen is that in teaching our girls about themselves, they are so much more open to have "Relationship first" with their siblings.  I see them working things out in the most understanding of ways.
It is precious. 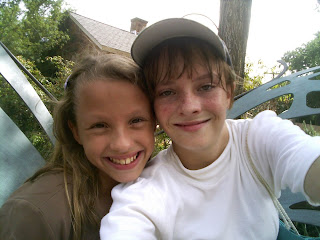 We have also expanded our use of BCLC to our Elderly neighbor.  She can be very difficult. She often comes over and yells at us and curses at us.  It is very sad to see her deteriorate to the degree she has.
At first we weren't understanding what was happening and I, YES I, even escalated things by challenging her on what she was saying in front of the girls.
But in my prayer, it dawned on me, (the Lord SHOWED me) that I was not loving my neighbor! I wept tears of sadness , realizing that I had not been a good example to anybody in my mama bear protection of my girls.
So I told the girls that I was sorry and we need to pray for our neighbor. And then, we made a plan to be kind to her no matter what.
Yesterday I had the opportunity to use BCLC on her! I was actually a little excited to try it out! :)
Weird I know.....
She came over cursing at us and yelling at us.... she thought her husband had loaned us tools and she wanted them back. We have never met her husband, as he passed away 2 years before we moved here.
So, instead of saying "We don't have your tools!"  I said, "Those tools are important, aren't they!"
She said, "YES! They were my husbands!"
I said, "You must really miss him!"  She had a tear and said, "Yes, I do."
So, I asked her, "So when you were younger, what did you do for a living?"  Her face brightened and she began to tell me that she was an accountant.  And I shared that our son was an accountant too!
"He is??"  yes, maam! A CPA!
I asked her about her grand sons, and she beamed with pride. And then I gave her a big hug, walking her back to the gate.  She said, "Well, ya'll have a nice day!"  I said, You too!  And she was gone.
Tomorrow, she may be back for something else.  It has been happening often, and I am sad that she most likely has althimers or severe senile dementia.
BUT..... BCLC works! Yea!
It was a LOT easier to redirect her, than to be confrontational with the truth. "Hello, we don't have your husbands tools!" (the truth is important, but in her case it won't do any good)
Why is it that it is so much easier for us to fall into the negative than be in control with our emotions
even when we KNOW the fallout won't be good??!!!

I just want to encourage those in bloggy land, who are looking for information on BCLC techniques and trying to figure it out, to know that you cannot love too much. You cannot be too patient. You cannot be too kind. And none of those things make you a door mat.  BCLC is not doormat parenting. It is very much being in control! But in control of yourself first. If you can't control your own emotions, how will you be able to guide your child's?

I have been writing alot about my rocking chair and I have to say, it is a big part of BCLC parenting,
for us.  It is an amazing tool to use for gaining self control, breathing, praying, talking, communicating, rubbing feet and hands, massaging arms, wiping away tears, listening to hearts beat, listening to worries, fears, dreads, stories, happy excitement, dreams, wishes, and a place to talk about anything! It is a freeing place. Our freeing place. :) 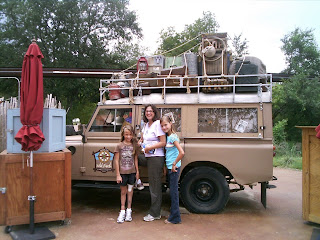 I really think our internal clocks have been reset. :) We've really gotten rid of some heavy baggage!

Good post! My oldest' therapist just called me yesterday to tell me he was having some major regressions. (He is in RTC) I reminded her again of the time of year and how it relates to some of his biggest traumas.

I am very interested in the BCLC and plan on 'googling'it this evening.

OH! BTW I love my snuggle time with my kids. I no longer have a good rocker, but my recliner is big and soft and perfect for cuddling.

Bless your heart! I am thrilled that you have reset your clocks! YEAH! Our clock gets a little less "alarming" with every year and with every healing moment.

And good for you with the neighbor!