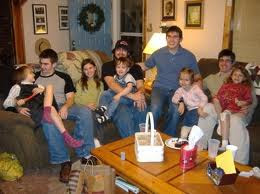 We have been homeschooling our kids since 1992.  We got into this whole life style thing because our boys were in need of a more tailored educational approach.  They just couldn't quite fit into the cookie cutter education available in the public school system.

So, when our son, Tim, who had significant special needs both physically and educationally came home to school, he was 11 years old, and couldn't do simple math, or really read.  His progress was also hampered by seizure activity which would cause him to forget everything he ever learned in life from anywhere between a few hours or up to 3 or 4 days.  (He is the guy in the blue shirt :) )

We sort of learned by default, if he woke up and couldn't remember anything, that was the morning to do art!  Usually by afternoon or the next day, the ole' brain would start to function again, and he would be right back on track.  Yes, MY REACTIONS to HIS Brain Damage, made a HUGE difference!

So we went from,  me nearly weeping and saying, "What do you MEAN you forgot how to add 3 plus 5!"  To "Ahh, don't worry about it, let's go for a drive and draw in our nature book".
It is funny how you learn these things from just being a parent and nobody tells you about it. If they had told me, we wouldn't have wasted so much precious time!

I learned the same way about putting on his shoes.  Because he had increased muscle tone from the CP, if we were in a "hurry", I could NEVER seem to get his shoes on his feet.  Why? Because he was feeling my tension trying to rush, and it made him tense up.  If I put his shoes on during a relaxed time, they went right on.  So I learned by my own failures of not being on time how to get shoes on a kid with CP really easy! :)

Sooo, here we are all these years later, deep in the trenches of home education, and I am still learning.
But this time I am learning how to teach girls. How to teach girls with learning disabilities because of trauma, or because of exposure to drugs and alcohol.  Some of the issues are the very same ones with the boys, and some are not.
New territory is being covered when it comes to alcohol exposure and learning.  And then of course there is the MOTIVATION issue and trying to discern, is this laziness, lack of motivation or a real issue of inability because of a lack of understanding?
It is most likely ALL OF THE ABOVE!

So, this a.m. we had a family meeting, after I was grading a paper that could not have been more wrong than it was.  Now I KNOW that I KNOW this particular little girl did not forget her parts of speech. We have been studying them for YEARS, yet every answer on her labeled sentence was not only wrong, but sloppily written.
I called the FAMILY meeting, because I want all of them to know that we must do our best.

And this is the gist of what I said.
Some of us have a harder time than others with learning and remembering.  I understand.
BUT.... all that means is that you MUST try all the harder, motivate yourself to do it, and really, really DO it!  I don't know if my talk helped yet. It is too soon to say... but I do know that it must be very frustrating to always seem to be the last one, to seem behind, when in fact, you are really way ahead of the game, if you are MOTIVATED to do it right.  Even if you have to go slow, and even if you don't get it the first time.... the old "try, try again!" Really, REALLY does work.
If you are  Slow and steady and you finish the race,  by finishing, YOU WIN.

I know our son Tim, who is now a high school teacher gives that message every day in his Special Ed classses.  "You just have to work harder and try harder than everybody else, because it is what YOU have to do! And if you Do it! It pays off in the end...."Look at me, I'm here teaching high school!"

Thanks Tim, I needed to hear that today and so did some girlies I know. :)
Posted by Christie M at 8:44 AM

I tend to not worry too much - maybe not enough. My daughter, Lydia, was SO bad at math. Finally, I decided to stop making her life a living hell. She finally was able to graduate HS, but she had to take Algebra THREE times....finally an on-line program did the trick because she had to get every problem right before she could go on. But, it never occurred to me that she'd have a job where she'd need math! She clearly was indifferent to numbers from day one.

On the other hand she was (still is) brilliant with words and had a HS level vocabulary (she was tested at the university as part of a psychology study we volunteered for) when she was 5.

I am glad I just rejoiced in what she was GOOD at, unlike school where her math weakness was seen as a PERSONAL weakness.

You said, "And then of course there is the MOTIVATION issue and trying to discern, is this laziness, lack of motivation or a real issue of inability because of a lack of understanding?
It is most likely ALL OF THE ABOVE!"
And I ask, " Christie, Were you reading my mind!?" LOL!

I feel like I lie in bed at night and say these same words to Steve fairly often!

I do know that I have one boy who tries and one who gives up--With otherwise about the same learning abilities. Amazing the difference! But I'm glad for it because it shows me that it isn't hopeless. As your Tim says, they just "have to work harder and try harder than everyone else" because that is the way it is!

And, as frustrated as I feel, I often think that if I put them in special ed, I'd just be doing this 'dance' at the end of the day with homework instead. My other fear would be that, while I, as their mother, am willing to insist that each boy is truly trying his best, I am afraid that others would simply say, "This kid CAN'T learn."

Our first thing to do was learn simple math. Once he did that he was so motivated that he would be up at 6:00 doing his school. He knocked on my door before I was up to ask a "math question".... coffee!!
He worked from 6 a.m. to 7 or 8 p.m. every day (5 days a week) until he was 19.
He didn't think he was smart enough for college, but we all knew better.
He took just a few classes a semester and then 1 in summer and 1 in Winter. He studied 7 days a week full time and it took him 7 years to graduate....
then another year to get his teaching degree....
He is a bit of an amazement when people find out he was a full time special ed student, and then homeschooled after that. LOL

I am a little more relaxed this time around, knowing that things do improve.
Our pep talk seemed to work today and Anna and I did some really great math. She finally got down double digit multiplication with 3 numbers on top....

The thing I worry about the most is the balance between motivating them, and then that precarious situation of them shaming themselves.
I feel another blog post coming on on that issue.
I am curious about your thoughts on that.