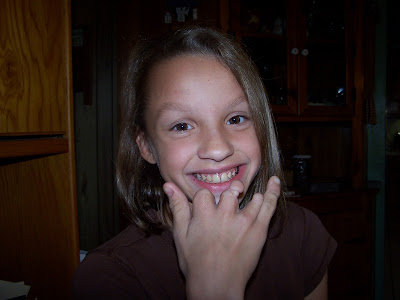 Yesterday Sarah and I went to see the Hand Doctor.  It was a really good visit.
I had never met Dr. Ezaki.  She operated on both of Sarah's hands when she first came to the United States from Ukraine, but was with another family.

Dr. Ezaki had obviously done her homework about the adoption disruption and re adoption, so when she came in, it was clear in her mind what Sarah's family situation was.  She was so kind and affirming.

I was so very impressed with her.  She  asked some questions I had never even thought about. Does she need any special accommodations for school. Can she write as fast as other children?  Can she type?

She was just as impressed with how well Sarah was doing.  She also asked about her lower leg (not prosthetic) because she has restrictive band syndrome and there is  a large band down there, or was.
She was just great!

Then, she asked Sarah about her little floppy finger.  She explained to her that she has a little concern that it is loose like it is, and took a great amount of time to explain that it can be relocated to a safer location. (down into the bottom part of the finger by removing the bands and pushing it down to make it secure)  She was a little concerned Sarah could catch it on something and cause damage.

Sarah said, "You mean operate on it?"  Yes, it would be a surgery and she explained it.  Sarah was so funny.  She said, "I'll have to think about that." "Besides, my friends like to play with it, and I sorta like it!"
I love it that Sarah is so comfortable in her own body and finds it to be just fine!
She is open to the idea of reshaping it, and we will let her be that guide.  I believe that her body is HERS to decide if it needs altering.  :)

So, she talked a little bit about the appointment with Daddy this a.m. and re explained in her own words what the doctor suggested.  Daddy asked, "What do you think?"  She replied, "I'm still thinking about it. "

Good for her!  I like it that she is not impulsive in her decisions.  That way when she does decide, it will be her decision and she will not have regrets.

I am so impressed with your decision to let her lead in making the decision on her medical proceedure. It is a loving way to let her know that she is beautiful the way she is and encourages acceptance.

When I was younger, I used to take care of a woman who had spastic quadraplegia. Our son had cerbral palsy and I asked her how she felt about surgery etc. She told me that one of the biggest things she resented in her childhood, was that she was given no voice over her own body.
Because of her advice, I gave our son permission to be part of the decision making process with his body. I know of people who disagree, but it has worked well for us.
Our son was able to feel in control when decisions were made, even hard ones, and we have done that with the girlies too.
Kids are smart enough to know what is "necessary" and what is "elective"..... I am grateful to my friend for her wise advice.