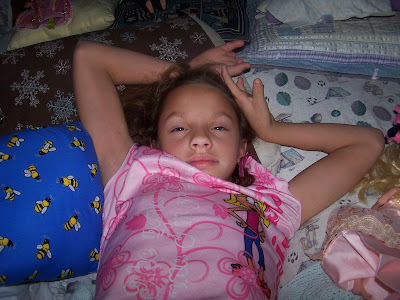 2 Days ago, we began the "Changing of the Room".... we started allowing each girl 6 months of having thier own room, and 6 months of sharing.  We started this a year ago, so Erika and Anna have each had their chance at having their own room.  Anna used the room for her things, but spent most of her time sleeping with her sisters. Erika used the room fully, and invited her sisters for overnight visits.

But it is Sarah's turn now.  Honestly, I didn't think she would do it.  She kept discussing it and saying, "I don't know if I want to.  I DO want to and I DON'T want to!

We told her she didn't have to. She has had major fear issues about being alone due to some circumstances before we knew her.  But she surprised us all and said, "I'm going to do it!"

But LAST night, she went to bed surrounded by Barbies and babies and went to sleep.  At 4:00 a.m.
I heard a quiet little weep.... I asked, "Are you ok?"  She said, "Mama, I just don't think I can do it!"
I let her know it was 4:00 a.m. and it was almost over. She asked if I would stay awake until she went back to sleep and I said I would.  I think she went right back to sleep, and then, I woke up and checked on her at 6:00 and she was soundly sleeping. YEA!

We got up and went in and woke her and congratulated her on a true Heroic Effort to conquer her fear.

At breakfast this a.m., daddy was talking with her  about how he was so happy that it was her choice to do it, and that we would never force her to conquer her fears; but we would support her efforts and cheer her on.  It is her timing and she will always be safe with us.

It may not seem like much to some of those who read my blog, but this little girl could not go to the bathroom alone day or night just 5 years ago.  It was not just fear, it was TERROR.  It took 2 plus years to get her to go to the bathroom at night without us getting up and staying in the bathroom with her.
Our Sarah is growing up and facing her fears and CONQUERING them! YEA! SARAH!
Posted by Christie M at 6:19 AM

Yeah, Sarah!!! I'm doing backflips on the table because I'm so excited and so proud of you! Thanks for being a light that gives me hope that my own children will continue to heal! :-)

Great job Sarah! It is good to hear you are able to overcome. You are a wonderful encouragement for all of us.

Good job, Sarah! I know it was hard... There are lots of things that I am still afraid of like the dark. I have always been afraid of the dark. But you don't want to just live in a box which is what fear makes you want to do. Sometimes you just have to bravely do things anyway-even though you are afraid. way to go. love you

Bravo Sarah! Nastia just started sleeping alone too! And she has the same bathroom fears ( I still have to be in there when she showers, but she'll pee by herself now...phew!) So proud of you! I know how scary it was for Nastia, and she is 18! What an accomplishment! great job!

Wow! Good for her! And, not unnoticed, Good for you!

Yay, Sarah! You did it! What a great start.

Congratulations Sarah! You must be proud.
Maria (Canada)

Congratulations, Sarah!
Everyone is proud of you for facing a fear! We all have fears that we must face at some point in our lives. My dog, Ava, has been smiling all morning at your accomplishment. She had to learn to stay home without me sometimes! Afterall, a dog (especially this one)usually can't come to church services!

I'm all for overcoming fears, but honestly I have decided that the American obsession with everyone having their own room is crazy.

Privacy is important,but why do you need it to sleep? I had terrible fears and lonliness at night when I was a child. There was never any question of having anyone to sleep with, but sometimes I'd hunker down outside my parents' door.

In Korea a lot of families have "sleeping rooms" and everyone sleeps there together on mats on the floor. If I'd known about that in time, I'd have instituted it in our home. And think of all the nice space people would have in their rooms!

Oh Annie, I will totally agree with you there! We raised our 4 sons in a 1300 sq. foot home with 3 small bedrooms and everybody was fine.
We moved into a 700 sq. ft. mobile home for a while and all was fine too.

Erika started the trend with wanting to try her own room last year. It was something we had never considered.

My guess is that Sarah will sleep with Erika, Anna or all 3 together most of the time. She wanted to try to sleep alone. I'm glad she tried and succeeded.

I too had HORRIBLE fears that took me well into my 20's. I was so paralyzed of the dark that I would tremble all night long if I woke up.
It was awful.
My mother in law joked that she used to baby sit me when my husband worked a 3rd shift because I couldn't stay alone.

I was finally able to conquer my fears after the children were born.

I hope Sarah is able to much sooner!
Her fears however stem from some particular incidents of being abandoned. She knows this, and I am so very proud that she is trying to put her emotions where her logic is. She knows we will not leave her alone. We would never tell her to go to the bathroom and then drive away leaving her alone for hours.

What I'd REALLY like to do, is knock the wall out between the two bedrooms and make one HUGE room so they have plenty of wonderful living s space, break though into the attic and make a loft with a high ceiling for books and knitting and crafts and other things.....
but.... that is but a dream. :)

I love those "remodeling" fantasies myself!