Despicable Me Review From This Mom 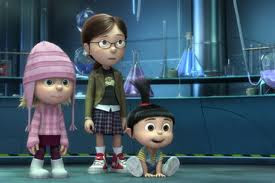 When we were at Camp over the weekend, we were introduced to a movie we had never seen.  "Despicable Me".....

It is a animated feature film about a man who is a career criminal, who uses 3 orphaned little girls to further his life of crime and pull off stealing the moon.  It sounds really silly, which it was...... it was also somewhat clever and humorous in parts..... and the little girls were all adorable...... and they made you like them..... Then there was the Orphanage director who was supposed to look nice and motherly, yet she was sinister beneath the surface and untrustworthy.  She used the children, and then, when they didn't please her, placed them in "The Box of Shame"...... and everybody laughed.   But me.

It was a little too real and surreal at the same time and I had trouble processing what I was watching.  As a parent to 3 little girls who were orphaned at one time, it was a little too close to home.  One of our girls didn't watch the movie but chose to play pool instead.... another wanted to see it, and as soon as the "Box of Shame" showed up, she went from the front row to sitting right next to us and I could feel her breathing...... she said it didn't bother her.... but her body language said something different.
Our other little girl laughed through the movie and enjoyed it.

Apart from the strong adoption - neglect theme throughout the movie.... here is what REALLY bothered me.
There was nothing moral about this movie.  The criminal did not give up his life of crime. He did fall in love with the little girls and wanted to be their father, but he never apologized for being a career criminal..... so it was mixed between a really bad guy, who had a loving heart towards his kids.

That is sort of like, praising a bank robber who quits robbing at 3:00 to be on time to his daughter's ballet recital.... Is that something to praise?  I don't think so.
I am concerned about this type of movie, because the message is subtly placed within a humorous plot and it is FUN.... some of it.   So why be so fuddy duddy about it?
Because it is IMMORAL.
The bad guy was made to look good. There was no good guy in the movie at all.

You do not adopt children to use them.  Stealing is WRONG. A life of crime is wrong.  Just because a child gets a hug good night and a bedtime story at the end of the movie, it doesn't mean it is good.
I really did not like this movie.

For a child who is insecure in their placement, I could see that it could be devastating.  Had it been 2 years ago, we would have all left to go and play pool or do video games or air hockey.  I can't expect everybody to understand this, and I don't....but for those who might accidently get introduced to this movie; Beware.
Posted by Christie M at 9:25 AM

Christie - thanks so much for sharing this. I haven't seen the movie but was curious about the themes. We can say all we want that a movie is 'just a movie', but to our little ones (and maybe not-so-little ones), there's no way to fully understand how a movie might impact them or bring up old pains. So it's good to share these reviews with each other so we can make informed decisions. We used the plugged in movie review site anytime we consider a movie for our boys, but in cases like this one, they're obviously not going to be reviewing it from an adoptive family's point of view.

I've heard similar sentiments from others regarding this movie. We've opted not to see it. We'll definitly pass on it now. Thanks for the review.

I avoided this movie because it just didn't "feel" right to me although I had not idea what is was about. Just the trailer about the guy and the little girls just, I don't know...made me beware kinda. Thanks for your review. I usually use the site: http://www.pluggedin.com/ by focus on the family to help me with decisions.

I'm surprised they would play something about a Box of Shame at a camp full of kids with limb differences anyway. Don't those kids already feel unselfconscious sometimes just because they are different??

So sad that they wouldn't think through that a little better.

I'm glad to see the review. We're already really, really careful about what the boys see. It might not be completely fair, but we pretty much rule out any of the disney animated movies, and tons of other stuff is just so crude that we can't justify it at all.

I love screenit. Love, love, love it. Tim and I even use it for the movies we watch.

Also, I'd bet my life on which little girl was which. :)
Loves!

I didn't see the film, but it didn't strike me as being a good theme. It sounds similar to a children's book I read called "The Three Robbers."

The book is much better, it is about 3 robbers who accidently steal 3 orphan girls. They look after the girls who show them how to love. In the end the robbers turn good and use their stolen treasure to build a village for many orphans. A much better story!

Oh! I remembered the story wrongly, but here's a link about it: http://en.wikipedia.org/wiki/The_Three_Robbers

Yeah, Emily! I thought I was the only one who hates Disney animated movies.

You have to question the content sometimes (as in this example), but I also detest they way they have co-opted powerful children's literature and made it sappy, saccharine nonsense.

Thanks for articulating the uneasiness I felt about the movie. It had the kids laughing hysterically throughout and they still quote some of the funnier lines, but I just felt sick watching it and had them turn it off 1/2 way through, thankful that our adopted Max didn't understand enough to be disturbed by the content. And glad I could talk to the kids about how confused the messages of good and evil were in the movie, but how downright evil the criminal was.
Martita

I just happened upon this post while searching for something else. I really like the way you reviewed the movie. Thank you for your honest thoughts. Gave me a new way to look at the movie (which I didn't like but didn't give it much thought about why).