We are going full steam ahead with our new little sweetie.... :) 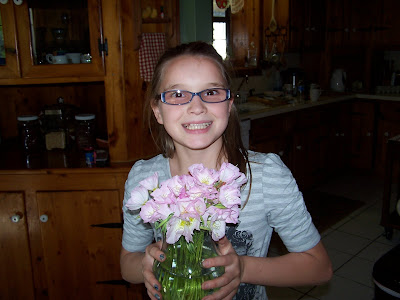 It has been a great week, and new glasses have given her a really great new world to explore! :)
I already posted about what happened in the events with Stetson..... and things turned out well.
We did go to ministry group last night, and Alli was able to visit for the 3rd time the same people.
This has been really good for her to know that the same people will be there, and they remember her name and treat her like all the other Minichs. :)
Mike and I are coming up with ways to help her include him more in her life. She is a mommy's girl and just like Anna did 7 years ago..... She has not been as accepting of daddy.  HOWEVER, she has moved in the right direction MUCH QUICKER than Anna did.  It was about 5 or 6 months for Anna before she initiated affection.  Alli has already begun to do this.....
So we are doing well.
However, there is the respect issue.  She says things to him in a way  she would not say to me, and that is what we were talking about in the wee hours of the a.m.   How to engage her to let him on her team. :)
Well, we could not have planned it better ourselves.  I just love how the Lord uses what we see as a problem, to SOLVE a problem... or at least begin the healing process....
Today, Daddy was in the shoppe catching up on a few things. The girls were inside and Alli announced, "I'm going out to make mud pies!"  She went out to have her fun, and the other girls stayed inside and we were talking about some fun things.... like what they were like when THEY came into the family..... We laughed as we recounted Anna removing Daddy's hand from her arm like picking up a dead rat to toss off....and how she said, "WHAT DO YOU MEAN YOU DON'T HAVE A BOAT!!!". We reminisced about how Sarah threw her pencil across the room again and again, and then protested when we asked her to join us in picking up some sticks after a strong wind storm.  "I don't pick up sticks!" LOL and then Erika, telling the translator she was being treated like a "Cabaka" because she was in the house like a pet and her sisters were outside playing. (She hadn't finished her math) And one of the funnier ones.... When Erika found out Daddy and I were married.  She burst into tears and huge sobs because she had totally planned on marrying daddy when she was older. LOL (I wondered if she just thought I was the cook!) :)
As you can see, they have come a long LONG way and now, it is Alli's turn.
So, Alli came in and said, "I'm really not myself right now."  I asked, "What do you mean?"  She said, "I'm angry!"  Oh, why?
BECAUSE DADDY IGNORED ME! (now, consider this is the typical thing she does to him, I was a little surprised and had no idea what had transpired outside)
So she climbed in my lap and we did some breathing.... GREAT PROGRESS after yesterday!
As I was rocking her, I began to ask what happened.  She told me that Daddy didn't listen when she told him Guess would not hurt the chickens.  I said, "Were you respectful?" She said, "No!" I kinda yelled at him..... "Kinda?"  "I yelled at him." Can you demonstrate?
She did. LOL
My response:  "It is NEVER ok, to be disrespectful to daddy like that. He is a good daddy and loves you...."
She said, "But he ignored me!"
To which I said, "It is never ok to be disrespectful to daddy".
And then, I turned it around.  I asked her, "How did it feel to be ignored?"
She said, "I didn't like it."
How do you think Daddy feels when you ignore him?
"Not good"  That's right... not good.
So we talked a little about what a wonderful daddy that daddy really is.
She said, "He is very nice, and kind".
She actually felt a little bad about what she had done.... which is good!  I had not talked to him, so I didn't know if he had actually ignored her or not.....
The great thing is.... Alli said she needed to tell Daddy she was sorry, all by herself! She calmed herself and then went and talked to daddy.
She came back in all happy and cheerful, and in the a.m. she was so sweet to him.
I am amazed at her progress.

And BTW- daddy really was not ignoring her. It was very, VERY windy and she did not hear his response. :)
Posted by Christie M at 8:16 PM

I am so behind on reading posts....this is such a great story.