This A.M. as we were getting into our morning. Alli and Sarah wanted to dance in their new Ballet Suits.
Alli was soooo excited!  She also had this perfect plan in her head as to how everything was going to work.  Daddy was going to dance with Sarah and the music was going to be a certain way. She had it all worked out.....
and then her dancing world came crashing down.....
It wasn't as she had planned.
Daddy did a few twirls and then announced that he had to get to work.  The music was not the exact song she had wanted and then Anna wanted to read instead of take daddy's place....... her plans that were only in her mind,  as she had not shared them, were ruined, and she just couldn't handle that. Her window of tolerance was not open very far, and she went into dysregulation. It started with sitting on the floor.... then in the rocking chair. She went back into the distant stare.

We ignored for a few minutes and she went into her room. Sarah continued to dance, and she must have heard us tell her "great job Sarah"..... because she came back from her room to sit in the rocking chair.
That is when I made my move.
"Remember our talk in the van yesterday?"  yes
We switched places. Me in the rocking chair, her in my lap.
I asked her, "Are you sad that your plans didn't work out?"  Yes.

So Sarah put on the song and started dancing. I asked Alli, "now what can you do to change the song in a nice way?"  She didn't know.
So I told her to say to Sarah, "Sarah, this song is really hard for me to dance to, do you mind if we change it to another one?"
She did, with expression and all!  And then Sarah said, "Oh, ok!"
And they went and picked a different song.

The next step was a little harder for her to see.  Anna was in the mood to read. Alli wanted her to dance.
So I used the book I got in the mail yesterday that she knows I'm excited about reading.
I pretended to be interested in reading my book and Sarah was Alli.  We let Alli see how it isn't bad to want somebody to dance, but you cannot control what other people want to do.....My invitation for her to read my book helped her to see that it is ok to like to do different things, and it doesn't mean you don't love the other person.


Well, Miss Alli learned a valuable lesson this a.m. and she bounced right out of her mood into a joyful attitude. She apologized and then put into practice her newly learned tool..... When she did, and Sarah said yes, to change the song, she ran to me with a big smile!  I said, "Aren't those the most powerful words!!!!"  You tried so hard to MAKE things happen and you tried to use your anger and it didn't work.... But your kind words worked like magic! :)
She was thrilled.

And here is a picture of my two little dancers. :) 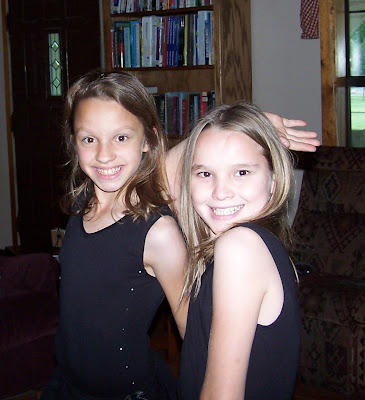 I remember mom asking us to 'practice' certain behaviors to reflect abut them.

She would ask us to say different phrases (requests, apologies) in different voices, and then ask what voice we would want someone to speak to us in.

Your mama was very wise! :)