I posted just before this, a post from Sunday that I forgot to post. :)  So much has happened since then, I guess I better catch up some more!

We have had a REALLY great week so far.  I am learning to read Alli's  body language and finding out how her thought processes work more and more.  I have to say, I am so pleased with how things are going.  I know I keep saying that, but it is just true! :)  Alli's relationship with Daddy is blossoming and she has been totally different towards him since our last post.

Her mindset is changing radically daily. (no pun intended)  In fact, this a.m. Mike said we were seeing RADical changes... and we both laughed at the pun. :)

Do we have a long way to go? Yes we do.  Right now, we have a little girl who has been so damaged by her past, going all the way back to Russia.  We were talking about how Radical of a change must have occurred for her between Russia and her first trip to the U.S.

She had GREAT trauma in Russia. She entered the Orphanage system at 7, and had to learn Russian.
Yes, she spoke a different language.  Then, less than 2 years later, had to learn English, and also learn what a family was. She was not ready. I cannot imagine the confusion and chaos of her first months in the U.S.   She must have been so scared, so frightened....
Processing all of this must be so very hard.  Not being able to communicate. Being in a totally different environment.... new foods, new choices, new experiences.... it must have been overwhelming.
Alli shuts down when she gets overwhelmed.

Well, now back to Alli.  Since our break through in the previous post, she has been kind and loving with Daddy in a way she had not been.  Daddy and I try very hard to form a United Front for our girlies. We are a team and we parent as a team.  She is seeing the safety in that now.

As this week has progressed, I have seen that she likes schedules. She likes to know what is going to happen and what is expected of her.  She rises to the occasion when called upon. She is trying VERY hard to do her school work, and to listen.
Today was our only incident of the week so far. :)  It was somebody else's turn to pick a dvd for the lunch hour. (sometimes we watch a fun thing like The Beverly Hillbillies at lunch)   Sarah picked that particular show, and Alli was very upset because it was in black and white.
She went off to her room after eating and was laying on her bed.  I asked her if she wanted to rest and she said yes.  I told her I'd do something else with her if she wanted.....
About 30 minutes went by, and she came out all rested and accepting that the show was black and white and it was ok  NOT to watch it! :)
She played with the dog for a while and then lunch was over.
We did a skit from our skit book, and she readily participated, and did two parts!
This afternoon, she and Sarah played and played and made videos together.... pretending the goats and chickens were aliens. LOL
They were once again two peas in a pod.
What impressed me was how she pulled herself together!
YEA!
Tonight, before getting ready for bed, we watched a little more of Jesus of Nazareth.
Resurrection Sunday is coming up fast and Alli is VERY excited about what we are going to do for Resurrection Sunday. :) 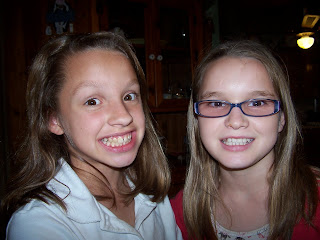 Just leaving a comment so you know that I'm still around, reading and praying for you!

My Bella's native language wasn't Russian either, and not even the other official language of the place she was born at. While it seemed a great disadvantage at first, early learning processes enabled her to learn languages super fast even now as a teenager.

Hi Hevel! I know you have been in the midst of Pesach....Passover, along with a new adoptive daddy AND being a grampa. LOL :)