Why Did Jesus Sweat Drops of Blood 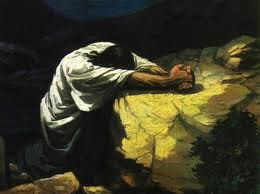 I have been contemplating a statement made by somebody recently, that if you experience any anxiousness when dealing with a problem, it is because you aren't trusting God.

A good friend today told me that after the death of a close family member, she was told something similar.....as if we aren't supposed to feel.

There is no doubt that as a believer, we are to trust the Father.... but we are also in Human Flesh.
Included in our flesh are all the emotions that GOD gave to us.

There is much speculation about Christ sweating drops of blood.  I have read that it is  possible, but only in an intense emotional state.
"Sweating drops of blood is not unknown in medicine but it is a rare occurrence. The clinical word for it is "hematohidrosis". It can happen when the blood vessels around the sweat glands constrict (due to extreme stress) and then dilate to the point of rupture. The blood is released from the body through the sweat glands."
Jesus prayed in the Garden, "Father if it is possible, Let this cup pass from me, but Let YOUR will be done!"  He was obedient to crucifixion, and he was WILLING, but that does not mean he didn't have anxiousness over the process.

The Creator God, the one who was eternally existent with the Father, was about to DIE...as in DEAD, as in FLESH DEAD AND ROTTING....AND.... he was about to experience this through Crucifixion, one of the worst tortures in Human History.
But even with that, I do not believe that is what he was concerned about...... I REALLY think the anxiety He was feeling was all about taking on the SIN of the WORLD.... all at once, bearing our SIN and the Punishment of that Sin.  The scripture says in 2 Corinthians 5:21, "He Who KNEW NO SIN, BECAME sin for us!"

Sometimes we all look at the awfulness of the cross, and it WAS awful, and forget about the Awfulness of our Sinful Nature.... how really REALLY awful Sin is.
I am so thankful that Jesus Christ took on MY sin.... and has been faithful to cleanse me and wash me white as snow.  That is a standing that I have with the Heavenly Father now..... but the effects of sin and my sin nature are still there, and it is a daily, moment by moment battle to bring the flesh into submission; one that I fail often.... but one HE ACCOMPLISHED in my stead.
And it didn't END at His DEATH.... HE CONQUERED DEATH! He ROSE AGAIN!
HE LIVES! INDEED HE DOES!