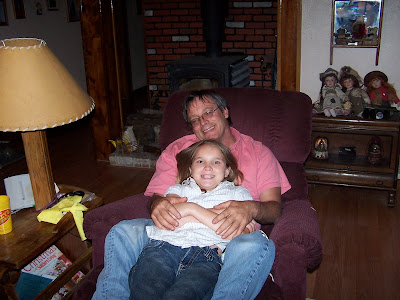 Alli, our newest little sweetie is just doing so well!  There have been many MANY strides made over the last 3 months, but the biggest hurdle to get over has been how she views Daddy.... really, not just daddy, but men, or in her words, "Daddys".
She has had a lot of them..... Her first daddy, the one in Russia, was violent. VERY violent. She has shared stories that would make you cringe.  Her second daddy, was most likely written off because of her first daddy.... She just saw him as mean.  Is that true? I have no idea. But she definitely was scared of him.  Her 3rd daddy was better, but she didn't really speak of him with respect.... and now her Daddy , Daddy.... Her FINAL daddy..... she has struggled to open up to.  She will, and then she won't. Her words, "I prefer mommies"..... 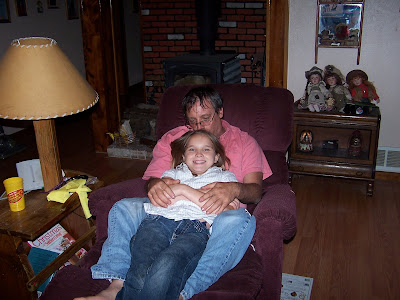 Mike is the most patient daddy.  He has learned to wait, to hold his tongue, to speak at just the right time, to be kind, to be caring, to listen, and to instruct. He never shows resentment or anger  when she rebuffs him. I truly believe that because of his patience and prayerful waiting....
TODAY became a milestone day.....
Alli has allowed interaction, but not as naturally as she does with me.  Today, she was stressed after going and spending the afternoon in a waiting room at the hospital.
When we got home, she was sleepy and hungry and I added to it by asking her to feed Guess.
She said, "Will somebody go with me! I don't like to go in the yard with Bryan. (the billy goat)
The other girls were all busy, and daddy said, "I can show you how to distract him! I'll go and help you."  She rejected his help, for no reason.  She just dismissed him...... :/

So we went to the porch swing so we could all talk together.... at first she didn't want to talk, and then she opened up.  She was actually able to verbalize that she had a harder time with daddys.  We told her we knew, which seemed to surprise her.  Daddy patiently told her how much he loved her and looked forward to the day she opened up to him as much as she has to me.  She said, "I'm really trying daddy!"  He said, "I know you are!" And we both praised her for her efforts.  She apologized for dismissing his offer and then Daddy and Alli went to feed the dog together.
She was so happy.
Tonight... we watched Extreme Home Makeover, and look what I saw!  Those two pictures! She was totally relaxed in his arms absorbing his love. :)
Way to go Daddy and Alli!
Posted by Christie M at 7:35 PM

How wonderful. I am so glad you are blogging about these things. I think most people don't expect how much progress you can make at home, simply by being open, and addressing issues. You take advantage of the moment, which can't happen in formal counseling.

Annie, I think you are right that much of what is successful cannot happen in a formal counseling session.
I do not believe Alli would even talk to a counselor. She would shut down thinking she was in trouble or she would get angry for being FORCED to talk.
We do not use force. You cannot do that in a 1/2 or 1 hour counseling session. You are on the clock...

I have always felt that healing takes a lifetime....and then some.:)
I do NOT believe in forced counseling for a child. Instead, I would feel it better for a PARENT to go to a trusted counselor....and then, take the info and decide if it is right.
After going to an advanced training Seminar with Heather Forbes, my thoughts were confirmed. There were very few people there who were just parents. It was mostly social workers, LCSW's and Foster Parents getting credit for taking the class.

I went to lunch with a group.... and was rather shocked at the conversation. One lady, an LCSW with a family practice said she had never heard of Heather Forbes but couldn't wait to sell her book FOR PROFIT in her office, and then talked about how she could "try some of this stuff out" on clients!
WOW.... I wonder if her "clients" knew how flying by the seat of her pants that she was?
So we are talking... and then they ask about my practice. LOL
So I said something like, "well, my practice isn't really practice. I live with my children every day and have found proven ways to interact and help them heal." As I shared a few stories, this lady was like "Oh, I'll have to try that too!"
UGH.... I was thinking, I need to keep my mouth shut. LOL
That is one I want to make buy the book. :)