Alli and the Deli

I took Miss Alli and Erika to the Russian Deli, located in Dallas.  They had so much fun!  Alli couldn't believe there was such a store with all her favorite foods, so close to home!
She picked out all this: 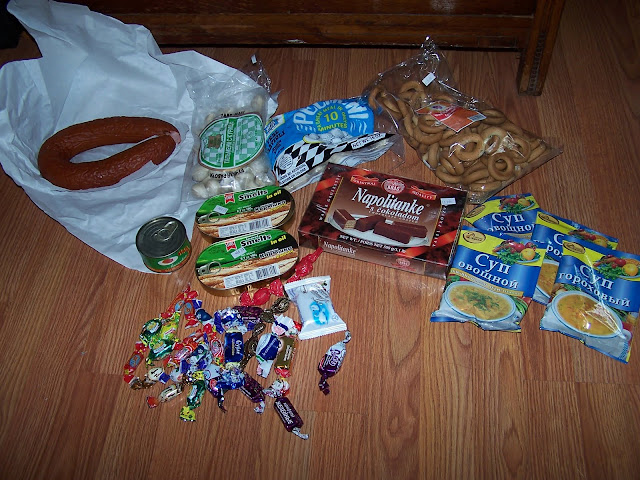 The sausage on the top left is from her particular region in Russia! You would not have believed her excitement when she pointed it out! I know that Sausage!!!!  She remembered the Pelmeni, and the cookies and soups and cavier and fish and candy....and..... the only thing we didn't get a picture of was the roll stuffed with cabbage. She and Erika downed those on the way home. :)
Here is a picture of her eating the stuffed roll from my cell phone. :  I remember having this when we were in Ukraine. I believe they are called Perogis.We stopped at a roadside bakery and picked some up. Oh they were delicious! I would have had one, had it not been for the gluten.  :/ 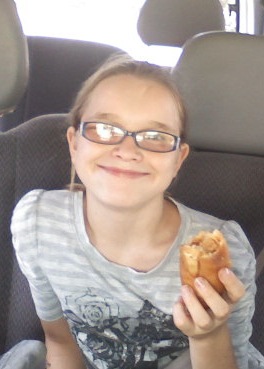 I have never seen a child so excited about food. LOL  On the way home she called Daddy and told him all about it, and then she said, "Mommy, I never dreamed a mama would do something so nice for me. "
Made me want to cry.
I am THRILLED she had such a great time and that it was such a positive surprise for her.
The man at the Deli spoke to her in Russian, but she couldn't remember any. :(  We are working on it with Rosetta Stone. However, Erika surprised me and actually answered something back in Russian .... the man said, "Very good!" :)  Yea for Rosetta Stone. :)

On Monday, Erika, Sarah and I plan to go to Out on a Limb Camp.  Anna, Alli and Daddy will be on their own for the week. :)  Daddy has already arranged for our friends from Russia to come over and cook a Russian meal.  Smart daddy! LOL

That food looks really familiar :)
I wish we had a store that is close to us.

Cate, how close are you to this place?
http://russiangourmet.com/

This should be interesting. The soup directions are all in Russian. LOL

Oh, I can understand their excitement over food from a previous home! It's something that can really get exciting!

Also, I have a Russian speaker here, so if you need help with the soup, just send a photo with the instructions!

It's wonderful to have your 'home food' once and a while.

I remember in Austin we used to go to a Chines shop and I would always get 'White Rabbit' a Chines white candy that was wrapped in rice paper.