These girls! They are just growing up so fast!  It seems like yesterday she was a  precocious little 5 year old!
For those of you who do not know our Sarah.  She is a delight!  I know the Lord must have really wanted to bless us when He sent Sarah to us through Adoption Disruption.....  I had never heard of adoption disruption until Sarah came into our lives.   She is originally from the Kharkiv region in Ukraine. Her beginnings are about as bad as they can get.
But we serve and AWESOME GOD....HE had plans for our sweetheart and HE had plans for us. :)
I would have never dreamed we would have a child from another country. Ukraine was not really on my radar screen.... But GOD..... He intervened in our lives.  Here are a few pictures of our little girl before we met her.... :) 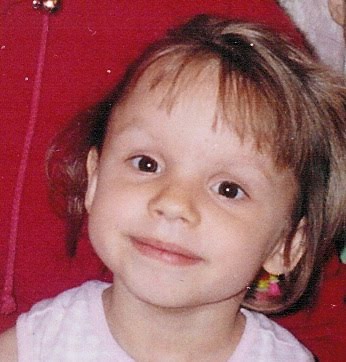 Wasn't she just adorable!!!!!
Sarah's beginnings are rather unknown until she was found in a TB sanitarium.  The missionary who found her said she was sitting in her crib with a look of extreme consternation and would not interact.  He told us the doctor said to forget about her......
BUT GOD....

Sarah made it to an orphanage at the age of 4 years and one month.  On her 5th birthday, she became a U.S. Citizen, having been adopted by another family.
And then, things didn't go very well.  In fact, they went terrible. REALLY terrible. :(
It breaks my heart to think about it.
Sarah lived in her first home for 10 1/2 months.
The family had been looking to disrupt for some time, and then we were contacted.
GOD INTERVENED in our lives......

Mike and I had just finished having one of those famous financial conversations.... the kind that say we need to cut back... we need to save more....
BUT GOD
Literally 15 minutes after the conversation the email arrived. LOL
I didn't think my husband would give it a second thought..... but I was WRONG.....

5 days later... Anna had the sister she had been praying for so very long!
2 days later, Anna got a bloody nose from her new sister. LOL
(It was a blanket issue) :)
I will never forget that little incident. :)  "She took the blanket!"

The boys got us prepared for Anna, and Anna prepared us for Sarah. :)

Sarah was with us for 6 weeks when her birthday came.  She got a call.... it was from her other family.
The only thing each of them said was, "How's your leg? How's your hand?  I could see her frustration.
(Sarah is missing a leg and fingers)  By the time the last person got on the phone, she exasperatedly said, "My leg and hands are fine!"
When they hung the phone up, she burst into tears and wet herself, shaking all over.  Poor baby.
I scooped up our broken daughter and rocked her to sleep.

Over the years ( this is our 6th year) Sarah has been our delight.  She LOVES life. LOVES to Dance, LOVES To smile.....she is so fully of Life....
Tears of gratefulness well up in my eyes as I think about my sweet heart of a daughter.  She is one of the most amazing people I have ever met.

Some funnies from the past:
When Sarah was 6, we were in the grocery store and she proudly said, "Mommy! You make me SICK!"  The look on my face made her coutenance fall.  I asked, "What did you say?" She said, "I don't think you would want me to repeat it!" LOL
She was trying out language and learning to comprehend.
Another time she asked, "what's justaminute"?  I explained it means, "In just one minute"
A few minutes later I called her and she said, "justaminute"! :)

When Erika came home from Ukraine (Sarah's best friend at the orphanage)  she was almost 8. We had been home just a few weeks and I needed to go to the grocery store.  Daddy was home, but on the front porch. The girls were playing, apparently blowing bubbles in the bathroom mirror....
Erika slipped on the bubbles. I heard her slip and fall, as I was bringing in groceries.  And then there was silence.
Daddy came running, I went running and we could barely get the bathroom door open.  There was Erika laying on the floor, quietly crying and Sarah blowing bubbles in the mirror and looking in the mirror as if nothing had happened.
I said, "Sarah, did you know Erika fell down?"  She said, yes.... still blowing bubbles.
I said, "Why didn't you tell us?"
She said, "She's too big to move.....!"  LOL

We had to teach Sarah empathy and what do if somebody was hurt.  She didn't know. We did lots of role play..... She is now one of the most caring and compassionate little girls. :)

Because of Sarah, we found out about Erika.....another intervention!
I cannot believe our little girl is going to be 12.  Amazing! 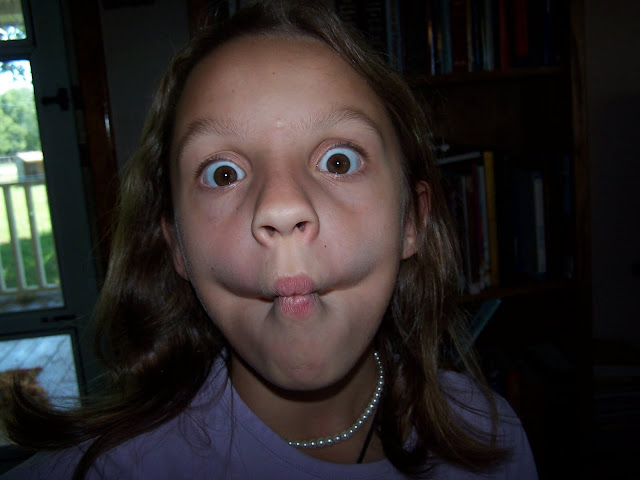 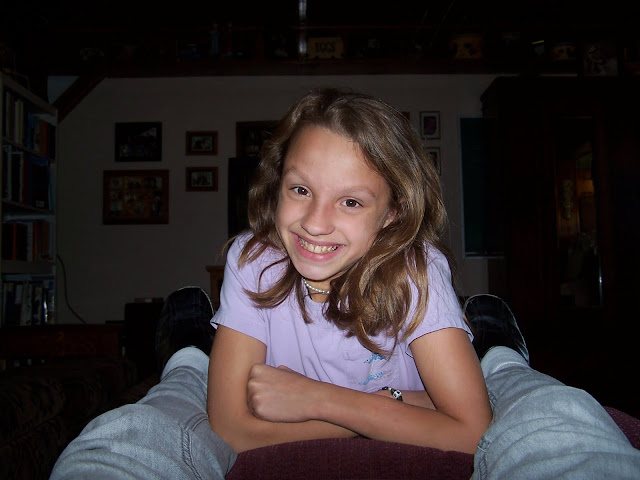 Great story. We serve an AWESOME God and I think it's so cool how He- God- always surprises us and we end up some place we never would have dreamed.

Hope you had (have? I don't know, I've lost track of date differences!) a great birthday Sarah! :)

HAPPY A BIRTHDAY, SARAH! (I guess I should post that 'Happy a birthday, Sarah' on HER blog!) :)(Or send her an Email)