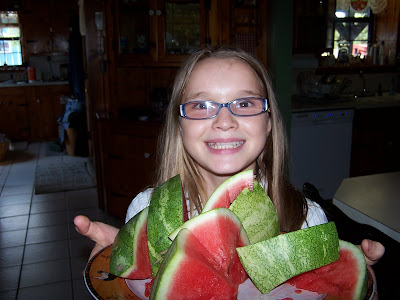 Today, went really great until it was time to change chores.  Miss Alli has kitchen now, which includes cleaning off the dining room table.

This may sound really silly to some, or that it is making a big deal out of nothing.... but it was important.
A little background:

Alli has HUGE issues with not being believed. She was called a liar long ago...and this hurt her deeply. She also, was rejected..... so lying, punishment and rejection are all mixed up in her mind, which triggers a fear reaction if she thinks you even THINK she may have not told the truth.

We typically do not ask our children  if they are lying, because that corners a child and they will deny it.
It is fruitless.  Instead, we simply say, ....  "I see you left your socks on the floor" or "Since you didn't pick up your toys, you need to do it now."   This is a way to not give  any opportunity for a lie.

Most of the time, the issue will be handled gracefully and peacefully, with a positive result. "Item picked up and put away."

But there is another kind of lying that has to be handled head on. That is what happened today.

I feel that Miss Alli has been ready to be challenged a little more..... as she has been home for 4 months now. So, during her turn to clean up the dining area and kitchen area, she was annoyed that Anna's knee brace was on the table.   She asked me, "Where do I put Anna's Stuff?"

I told her, "The reason you continue to want to know where Anna's drop off place is, is because you have full intention to put that brace in her things.

She said, "NO I don't!"
Then why do you continue to ask, and refuse to put that brace where it belongs?

She curls up into ball and refuses to answer.
I tell her I do not appreciate her lying to me.

I told her..... If you cannot admit when you lie, you will not continue to heal in your heart!
YOU MUST ADMIT WHEN YOU HAVE LIED! YOU MUST!

You're gonna hurt me?  (she had her fists formed ready to strike)

I stepped out of the box and calmly said, " I love you".... But if you want to hurt me;  "Go for it.""Just go ahead and do it!"  This worst mother in the entire world LOVES you EVEN though you LIED!

She took a breath and I was holding mine fully expecting impact....... LOL


And then I held her sobbing little body, exhausted.... and whispered how much I love her.
And then  I dropped another bomb she was now ready to hear.

HUGE HONKIN' SOBS!  She was now holding on for dear life.
I let her know that when Anna was little, (Anna sheepishly walking away in the background) LOL
That we taught her if she was lying, she could stop by saying, "Mom, I lied, the truth is"..... and then move on..... and Anna learned to do this.  Anna is very honest now.

Miss Alli by now was looking intently and deeply into my eyes hanging on each word.
Her demeanor changed. Her body was no longer tense. She was totally relaxed and mournful.

It is ok sweetie.  Now, can you tell me that you lied?  If you didn't I will tell you I am greatly sorry.
But I know you did, or I wouldn't have said anything.

And then we talked about what a huge break through we had.  We had  a big talk about being respectful....She has been TERRIFIED that somebody would think she didn't tell the truth, even a hint of somebody not believing her would upset her.
It was obvious that she had so much fear tied up into her own version of perfection.... if somebody saw her as lying... they would not love her, they would send her away..... and she was able to go through the experience with me being present, staying in the same place, staying loving, staying constant, and bringing her into a place of safety where she could see the wrong she did, but know she was still safe.

I love these moments when an unpleasant event can be turned into a healing event......

And then, we had some watermelon. :)

That's a very nice story, Mrs. Minich. When I have brake downs mom always says "I will never leave you and I will always love you no matter if you don't."

Mary Grace, your mama LOVES you greatly! :) It is a wonderful thing to be loved so dearly.

I am so grateful for all I learn from you. Although I've never met alli, obviously, I still feel a great love for her. I still struggle myself with telling white lies to save me from people's anger. When I pray for my own deliverance from this, I will pray for Alli too:)

Christie, I am very grateful for you. When you share these very specific examples of therapeutic parenting it is extremely helpful for me. You are so gifted. Honestly, reading your posts makes me realize I am NOT a natural at this (to say the least). God has really blessed you, and I am so grateful He is using you to bless us.

This is amazing! Do you give lessons :>) I have a 6 year old from Kazakhstan. I have not brought her much healing in 5 years with her. I'm learning a lot from your blog. How do you seem to know just what to do? Thanks so much!

Thank you for such kind comments.
I just pray that the Lord will use what He has given me to help others.

I am amazed at Alli's progress.... it took us much longer with Anna....but maybe that is because we were not fully implementing what we do now and still using time out? I don't really know. LOL I just know that LOVE NEVER FAILS!

Chrisie, can you understand why she was so insistant on not obeying you in the first place?

Annie,
I think she had it in her mind that she was totally right, and it became an issue of : "If she did what I asked, that made her wrong." You could call it a control issue; I almost saw it as a PTSD moment where she was right back in the mode of being "wrong and not believed".
With all our schedule changes, and her feeling like things were a little out of control, that probably set her off.
BUT... she has to learn she cannot take that path....
We have had great days since. :) I'm sure this will be an ongoing in and out thing for her for a while.
But we are making HUGE progress. :)