My fellow bloggy world friend Annie posted on this topic last week.  I wanted to share more of our own experiences regarding how Trauma invades in interpretation of events.

Part of this comes from my own life experiences, and the rest from what we have observed with the girls.

When I was a kid, we lived in some very bad areas in Southern California.  Southern California evokes all sorts of "Pictures" in the minds of those who have never lived where I lived.  While I lived in California, and not far from the beach, it was a crime ridden, gang infested, congested, unhappy kind of a place.  We had to be VERY careful. I learned early on that I could not trust the people who walked down the street. You didn't make eye contact out of fear.  You locked your house, your car, made sure every window was locked, and still, things were stolen.
Our home was broken into 2 x's that I can remember as a small child.
One night, I remember the shadow of a man by my window. I put my legs down hoping the shape would go away and the shadow was just me..... it didn't go away and I covered my head with my pillow and prayed the scary image would go away.  It did.  And then the image tried to climb into the kitchen window instead. Apparently my window was locked.
One time my mother was at the grocery store when I returned home from school.  She had left the back door unlocked for me to get in.  A man from across the street saw me  try the front door which was locked, and then go in the back door.
He must have known I was alone. Who knows how long he had been watching me.
The next thing I knew was he was knocking on the front door and offered me a quarter if I'd open the door. I refused.
Then I saw him see the back door was open.  I ran to the back door and tried so hard to get it locked. It was terrifying.  He was walking to the back door and we had those stupid old skeleton keys. It was so hard to get it locked but I did it just in time. He left very angry.
I never told my mother.
My parents thought I was too old to be afraid of the dark. I remained PARALYZINGLY afraid of the dark well into my adulthood.
My mother in law used to joke that she is the only mother in law who every babysat her daughter in law. My husband worked the night shift. :)

I also had some very scary experiences I cannot write about here.  But needless to say, they were traumatic and it effected how I viewed things.
When Annie wrote about the serene setting and how one person interprets things very differently.... I am that person too!
I think when Mike and I first married, I drove him crazy locking everything.  He would walk out of the house and I'd lock the door.  I locked car doors, I locked the garage and I locked every window. I am a very good locker. LOL

Mike's upbringing was WORLDS apart from my own.  He grew up spending his days on the Lake of Pawtuckaway in the Summers, and Nashua NH during the school years. He ran the streets and played and never felt a sense of danger. He has fond memories of his childhood.

To THIS DAY..... when I walk out of a store, I have my keys in my hand set for self defense just in case. Logically, I know I am in a pretty safe place.  But my experience tells me otherwise.
When I see somebody walk down the street in our country area, I am immediately suspicious.
Mike sees a guy walking down the street. I see a criminal.
Isn't that AWFUL!!!!!
I don't like to view things like this.  I FIGHT IT..... and I have done pretty well overcoming much of it.  I even leave the door unlocked during the daytime now. :)

The experiences I had as a child, have helped me to understand where my girls are coming from sometimes.  While they are different, there are some common themes.

So, when Annie showed the picture on her blog..... I looked at it and thought about what I would have been like several years ago. I would have seen a bad person lurking in the bushes, or could have seen it wasn't safe because nobody was around.  Today, I am not that person.... Today I can look at a picture like this: 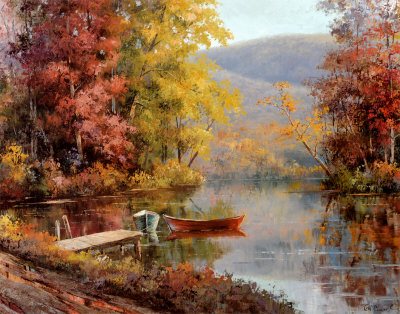 and actually enjoy it!

The other day, Alli and Sarah went for a bike ride.  Sarah, is no longer afraid like she used to be. 5 years ago, we had to stay in the bathroom with her, even in the day time.  Today, she can ride her bike freely and enjoy everything.
Alli, is still afraid.  Alli is afraid of a car running her down. She is afraid somebody will kidnap her. She is afraid when Sarah goes ahead on her bike, it is because Sarah is trying to win in a race that doesn't really exist.   Alli gets her feelings hurt because she sees that Sarah wants to be first. Sarah gets confused because as she says, "I'm just riding my bike."

Alli is still interpreting her present experience by her past.  They are not the same. They cannot be measured by the same standard.  Alli is hypervigilant about relationships right now because she has never experienced so much love. Not because others didn't love her, but because she couldn't receive it.
Now that she can, she is cherishing it, and trying her hardest to hang onto it.  She is far from this serene picture. She is learning that she doesn't have to try so hard. We love her period. She is learning that Sarah loves her too. She isn't competing.  Nobody has to be first or win.  We are all winners. :)

Because of our new notebook experience, that I wrote about here, both Alli and Sarah were able to write about the bike riding experience of yesterday. We would have never known! LOL
And we were able to explain to each of them separately what the other is possibly thinking and how they can try to understand each other.

It really REALLY did help!

This a.m. Sarah and I looked at some peaceful pictures and talked about fear and what a fearful person might see.  Sarah suddenly said, "I used to be like that!" :)  I was so happy to see her understanding CLICK, and she was given renewed energy to love on her little sister who so desperately craves her acceptance. :)

Anna, Sarah and Alli rode bikes today for about 2 hours. They had a great time together.

Wow. I will never look at a painting of a serene setting the same again!