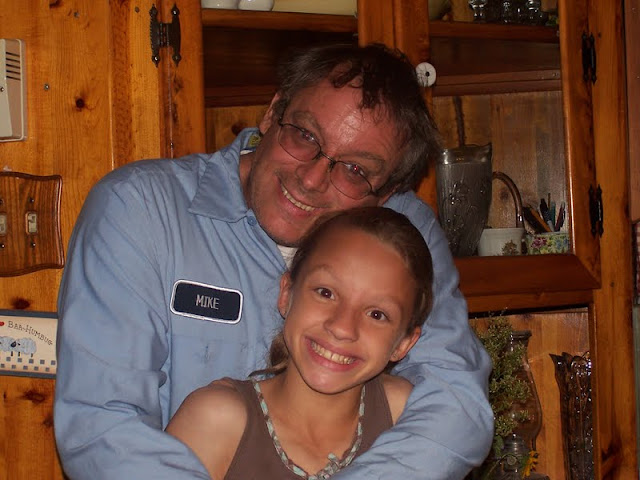 Many children who come home from Eastern Europe have issues with food when they come home. They are afraid of the different food textures, tastes and smells.   In some cases it can be more than just fear or dislike of the new tastes..... it can actually be an induced eating disorder CAUSED by actual starvation within the system from where they came.

My sweet Daughter in Law Ivy, wrote about overcoming an eating disorder here.  She described our Sarah's pain exactly!  I remember Sarah waking at night crying hysterically that she was hungry, and then not being able to really eat more than one bite.

When Sarah came home, she weighed 32 lbs and was nearly 6 years old. She was in a 3T.  The first time we sat down for a meal she said, "I only eat red soup!"  (borscht)  When we went to see the movie "Martian Child", both Mike and I looked at each other and grinned when the little boy said, "I eat Lucky Charms." :)

I realized very quickly, based upon what I had been told by her other family that she was going to have feeding issues.  In fact, feeding issues were a huge deal in her previous family.  They felt that she was being rebellious by not eating.  They thought she was throwing up on purpose.  Not only was she NOT, the lack of understanding towards her reinforced the food problems she was having.

Mom became a beet expert really fast!  I learned to make red soup!
I cannot tell you the joy she had on her face when she saw that comfort food sitting before her.  She ate her bowl of soup.
Why soup though?  Because It was easy on her stomach and she was very used to liquids and very simple foods. Everything else she would claim "hurt her stomach."   I believed that it did, but I think the pain was something else.

She was suffering the pain of hunger. She had been starved for so long and gone hungry for so long that she couldn't tell the difference between  hungry and full.  So, when she ate a pea, she'd say, "I'm full."  She hated the feeling of being FULL. But she would cry because her tummy hurt, especially at night.
We were giving her lots of whole fats and familiar foods, letting her graze all day long to try and not have a setting that would cause her stress.  We found that she would eat a few bites, declare herself full and then 10 minutes later she would be able to come back and eat a little more.

It was a very slow process getting Sarah to understand and recognize the difference between full and hungry. Before we could address it, she had to fully trust us with one of  her most vulnerable of feelings.

One day, after a couple of years being home, she declared that she was full after just eating a few bites.  I suggested to her, "Sarah, maybe you are not full, but your tummy just needs to rest a minute and what you are actually feeling is still hunger."  "Can you try to take 3 more bites and see if it goes away?"
She was very willing, and took those 3 more bites. This is something we could have never done 2 years before!   And, surprisingly to her, the feeling went away.  We worked on her recognizing the difference between the feeling of full and hungry for a long time.
That was the beginning of the learning process which enabled her  to eat more, try more foods and heal.
She not only had to heal from the food issues, but from the frightful torment she went through at the hands of those who thought she was just being "rebellious".
They cut her beautiful hair off. They hit her. They hit her because she would throw up. They punished her and made her sit for long periods of time, force feeding her....
Of course, NONE of this worked and she mourned the loss of her hair. One of the first questions she asked me when I met her was, "Are you going to hit me if I throw up?"  I was perplexed by this question and told her, of course not! Are you sick?  She said no.
To THIS DAY, Sarah has never thrown up. EVER.  (except right after surgery)

In the last 4 years, as we have served her the comfort foods she loves,  we have introduced slowly more and more foods, and today, I am very happy to say, we have a very healthy eater. She eats all of her food and has begun to ask for SECONDS!
Sarah still eats something right before bedtime and drinks whole milk regularly.  She still grazes in between meals too, and her food intake is at a healthy balanced rate. She loves all sorts of foods and will even eat cookies! :)   She is ON the charts! (not that charts are that important)  But she is ON THEM! :)

VERY interesting post.
I feel my daughter also has eating issues, though not as bad as Sarah's was. Our SW told us that Caroline will struggle with food her whole life (in one way or another).
When we picked up Caroline from the orphanage they told us she could feed herself soup, she was 14 months old. Needless to say she could not, which would explain how itty bitty she was.

Sometimes when I hear all the battles, traumas, challenges and daily crises your girls have fought and still have to face in the future, I honestly ask myself what I have done instead to earn my happy, quiet and rewarding life.

Your girls and their example definitely teach me day by day to understand how lucky I was and I am, only because of fortunate circumstances...

I'm so sorry for the cruelty that Sarah endured.

Schnitzelbank,
I hesitate to write too much about what Sarah endured because I don't want to spotlight the negative or diss her other family. All has been forgiven with Sarah, and with me towards them.It was a hard road.
However, I felt that it is important to write the truth about what happened.
ALL of us are capable of great wrong, I am sure there are many regrets. I don't know of any family who would go across the ocean for a child with the intent of harming them, but sometimes it DOES happen, which is part of why I blog... If I can help ANYBODY to understand the orphan...(not that I am perfect and understand everything, I don't)....but if I can help shed light, that is my mission. :) If I can help to prevent those entering adoption from having unrealistic expectations, or help them know that they will have emotions they didn't know were there and will need to deal with their OWN stuff so it is best to start today.... that is why I blog. :) I want the Lord to be glorified...I am glad I didn't start this blog until after Erika was home, because by then Sarah was on her way to true healing.

Amy, I really think they can get past them. I just watched Sarah down an entire can of black olives before my eyes for a snack... LOL

I do wonder if the tendency later would be to go the opposite direction and over eat? Maybe that is what your social worker is talking about?

I don't know. I just know that my sweet Daughter in Law Ivy, has struck a great balance in her life. I pray that all my girls do too. :)

Sarah may very well have food issues for her whole life in some way and even to "pendulum swing" to the opposite end of overeating would be a very common part of the healing process. You just have to ride through that... Balance and "being normal" is a hard place to get to, but you CAN eventually get there....well, at least being "normal" for YOU. ;-)

I can't tell you how much I respect you for allowing Sarah to make the progress she needed, in her own time. So many would cave with the inability to cope with the patience required -- an amount that I honestly can't even fathom.

I hope that, if I'm ever faced with such a situation, I could display as much love and acceptance as you've done.