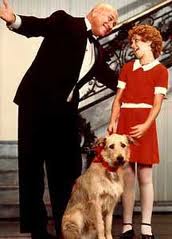 It was Sarah's turn to pick the Friday night movie last night. She LOVES musicals, and picked Annie.
Mike and I had never seen Annie before.  We had heard good things about it a long time ago.
The movie is Rated PG.  The little girls in the movie were VERY talented in song and dance.

The movie is about an Orphan child during the depression. It is about the hard life in the orphange, that is managed by an alcoholic woman played by Carol Burnette.  She remained drinking or drunk through out the entire movie.  She was verbally abusive to the children and also threatened physical abuse.
Because the movie is entertainment, the children didn't react to her, except to step on her toes a lot.

Annie is chosen to go to a billionaires house for a week, for an experience outside of the orphanage.
When she arrives, all the staff and servants are kind and full of song and dance. Then Daddy Warbucks shows up.  He is harsh and demanding and has no idea he is hosting anybody, especially not a girl.
He says to send her back.
Somehow, during her weeks stay, she turns him into mush, which is a very sweet part of the movie.
But when he gives her a necklace and wants to adopt her, she says no. She is waiting for her real parents to claim her. She has 1/2 of a locket they left with her.
He helps her try to find them by advertising.
Hundreds of people who are dishonest come to claim her for a 50,000 dollar reward.  In the end, it is the Orphanage director, Carol Burnette, and her brother and sister in law that scheme to get the money.  Carol Burnette withheld information that Annie's parents were dead, and she had all her private information, as well as the other half of the locket.  She and her brother agree to a 50/50 split of the reward money and her brother and a girl friend go and claim Annie.  as their own.  When they drive away, they pick up Carol Burnette and Annie sees that it is a plot.  She tries to fight them,but they hold her down and cover her mouth.

In the end, she climbs to the top of a bridge tressle and is dangling in mid air with a man in pursuit to try and kill her.
Then Daddy Warbucks helicopter and body guard come and rescue her.  She is back with Daddy Warbucks and lives happily ever after.

WHEW!  This is not a movie I would recommend for newly adopted children or children who are not secure.  It is full of triggers.

I was also abit surprised at some of the sauciness in the scenes and the political slant. Daddy Warbucks the billionaire was a selfish republican, and the president was  a soft hearted democrat.

I checked on Alli a couple of times and she said she was fine. She was more interested in the song and dance and the dog. :) I'm glad we watched the special features that showed how the movie was made, how the parts were chosen and allowed the children to interact in some of the acting scenes. This made it VERY CLEAR that this was a fictitious movie and not reality.

Unfortunately, the circumstances in this movie WERE a reality for some of our kids.  They suffered from rejection, abuse and the results of alcoholism and extreme poverty.  I tend to cringe when those things are made light of.

While the movie is full of song, dance and talent.... I would not recommend it, even if there were no traumatized kids in the house.

OMG its like you were reading my mind! I was actually driving down the street just yesterday on my way to work and was thinking about when I should let my kids watch this movie! I grew up loving annie and actually have it in my DVD collection now (I was even in the musical LOL). I was wondering how appropriate it would be initially for the kids to watch (well, I really wasn't wondering, I just wanted to know what other parents thought). After reading this, although I will eventually let them watch it, I think I will put it away for a while, until I feel they are ready - safe and secure at home, for however long that will take. That's so funny, that out of anything to talk about, you chose this, and I was just thinking about it yesterday!

I suspect it's part of the reason it is rated PG.

Oh, although I don't have any adopted children, I can just imagine that this movie would be very triggering and upsetting. I grew up with cold parents, and the Miss Hannigan character really triggered me, when I saw this film (and I was still a child when I first saw it --- when it first came out).
HOWEVER, I can say that the stage version is much milder. The script is more corny, the music more frequent, and since it's usually put on by high schools, the production is less "violent" and scary. For example, the whole kidnapping scene doesn't take place in the stage version. They "plot" the kidnapping, but are caught, as they try to enter Annie's house. And since you can see it's on a stage with props and backdrops, it doesn't just feel as "real" as the film, you know what I mean? There's also less boozing and abusive behavior by Miss Hannigan. She is mostly sour in the stage version, but it is, again, more corny than anything. That being said, I wouldn't hesitate to take my kids to the musical version (especially if it were being put on by the local high school or theatre troupe). :)

I agree with the poster above. I don't at all mind the stage play, but the movie "creeped me out" as the kids say.

One of my favorite movie musicals is Oliver, but I've been afraid to watch that one with my kids. The things that trigger them tend to surprise me, though.

I was a bit surprised to read the title of this post and see that you'd picked this movie! I immediately wondered how the girls would cope with with. I'm glad there were no issues.

I haven't seen the film, but I have (perhaps unsurprisingly, lol!) seen the musical, which sounds a whole lot less violent and sleazy and suggestive than the movie! No alcoholics or people dangling from bridges in the show I saw! Miss Hannigan was more of a disagreeable (comical) crazy lady than abusive. Yikes! :O No wonder you didn't think that was appropriate! o.O

FYI, the rating PG-13 didn't come out until I think 1985 (might be as early as 1983). So what was acceptable as a PG movie back then would probably earn a PG-13 rating nowadays.