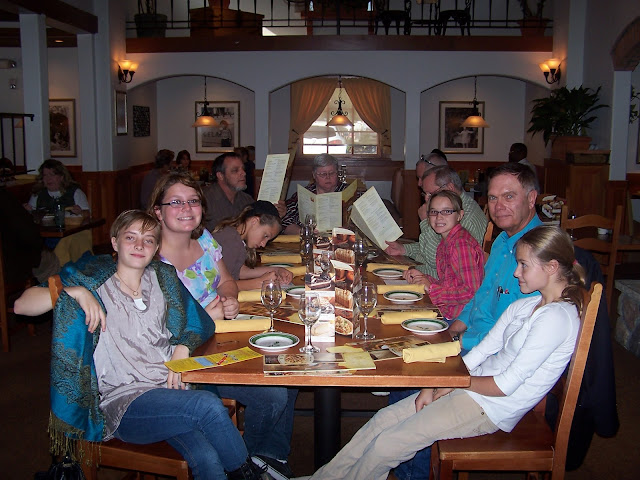 One of my little girls shared a memory with me today that made me just want to cry for all the children who do not have loving homes or parents.
She wishes to remain anonymous, but wants me to share, so that others know what children like her have gone through in the past and how it effects them.

She has never cared much for going out to eat, and a long time ago, it seemed to really trigger her. We never really understood why....Until today.

We went out with our dear friend Hal Tait, who is home from Afghanistan after working there as a contractor for 15 months.  He took us to Olive Garden today with several other friends.
Hal has known Sarah since she was 2 years old, because of a missions trip he went on, and was INSTRUMENTAL in making sure she was adopted.  I love hearing from him, because he always sheds new light on our Sarah. :)

So, on the way home, my sweetie was riding in the front seat and we had plenty of time to talk.  I was telling the girls a humorous story about the boys and how we accidently left one of them at a restaurant and had to go back and get him.
Alli said, "Oh Mama! If I had ever been left I would have thought you didn't want me any more! "The other girls all chimed in and said the very same thing! :(  This just breaks my heart.  It is also one of the reasons we can never be late picking our girls up, or making sure they know exactly where I will be and when I will be home.

After I mentioned it and we all had a good laugh, my sweetie said, "Mama, do you know why I have never like restaurants?" I said, "Honestly, no! Can you tell me why?"
And then she shared her heart.

She said that when she was moved, she was never told what was going to happen. It was arranged for her to have a visit with a different family and the social worker came to the restaurant to pick her up. But she wasn't told what was going on.  She said she was 3 or 4 and the family she was with just LEFT her with this man. He had a car seat and took her out of the restaurant and put her in the car seat. She was TERRIFIED and thought she was being kidnapped!  She said she started crying and the social worker sarcastically told her to "SHUT UP!"
I asked her, "Did he really say that?"  SHUT UP?  She said, "yes mom!"  I had never met him before and had no idea what was happening. :(
She said she went to visit the person she knew and was greatly relieved she hadn't been kidnapped.

Then, she said on another move, she had no idea she was being moved.  Some people came and put her in a car and she was given to somebody else.  She cried because she had a favorite outfit (The Clown Suit) that she LOVED.  They told her they'd get it for her tomorrow. Tomorrow never happened.
And that began a long saga for her of clothing issues.  I remember when we first bought her clothing. We were the first home she had been to where she outgrew her clothes.  When it was time to pass clothes down , she sobbed! "NO! You can't get rid of my clothes!"  We compromised, and to this day, she saves her favorite thing each year that she does not pass down. It is hers forever! :)

There was also a time where our sweetie was given to a family for a week. She had no idea if she was going to have to stay there or not, and said that the people were creepy. LOL  She said the lady cut her hair and put it in a cup and said they would keep it forever.   And then, she went back to her other home.
She lost count of the times she was picked up by total strangers and taken to places she didn't understand or to visit those she knew....

I just wanted to give a glimpse of how things can be for our children. There is so much they do not understand, and if adults don't treat them like used FURNITURE instead of CHILDREN who have feelings, they will not heal.
So now I totally UNDERSTAND why she feared restaurants so much!  She thought we were going to get rid of her. :(  Oh that just makes me hurt.

She of course knows NOW that would never be the case. I am so glad she shared with me today.
She is my precious girl.  :)

It must make him feel so good to see that little girl now!

That is so touching. My Maxim has gone through so much of this, and Nastia, too....she rememembers all of those experiences as people who "didn't want" her.