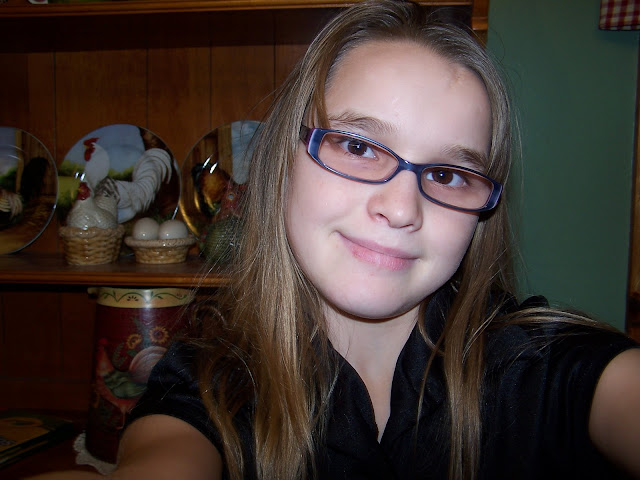 As I have written about anniversaries before, we are coming up on a few and our little sweetie has been feeling that "something" that she isn't always able to recognize just yet.....

Yesterday was a day of triumph, struggle and triumph once again.  I have debated sharing this, but feel it is important.  I do want to emphasize that Miss Alli is a sweet heart, most of the time. :)  She is funny and rough and tumble, and sweet and spunky and smart, all rolled into one.  And she has given me permission to blog about this.

She is VERY excited about her birthday, and about March 2nd, her 1 year anniversary.  She is also insecure about both.

We started off yesterday just fine... all was very normal.  And then, I watched something happen and it just made my heart burst with joy.  It may not seem joyful to some, but sure was to me, because it was a HUGE step forward for our little girl.  She was able to recognize and NAME the emotion she was feeling, and she used her tool to come over to me and tell me!  YEA!!!

Sarah received an MP3 player for Christmas, and she and Erika were loading music onto it at lunch time.  Alli was watching them together, and admiring the music they could put on such a small device.  She came over to me and said, "Mama, I think I'm feeling jealous!"   WOW!
I was so proud of her.  I asked her what her jealousy was about, and it was about not being included in the upload process, and she just really likes that MP3 player.
I reminded her how the Lord provided her a personal CD player a few months ago and she said, "but you can't load music into it like that."

"I know, it is low tech, but you should have seen what mommy had to deal with! A TRANSISTOR RADIO?"  "Have you ever heard of one of those?"  :)
And then I suggested she go over and participate with Erika and Sarah. They would include her... they didn't know she felt left out.
After a big hug, she did just that! And all was well, for about 2 hours......

I went outside to the shoppe to talk to Mike for about 15 minutes, discussing the various events of the day and telling him about that break through.  We had a few other ideas to encourage her, and then I came back inside.
When I came in, Anna told me that Alli had been being snotty to her sisters, and Anna tried to distract her and she said something snotty to Anna too.  (this is RARE, as Anna is just NOT the kind of kid who gets involved in snottiness with her sisters, and she rarely complains about sisterly things.)

So, I felt it was worth  a fact finding mission.
I called Alli, and asked her if she was ok?  She was not happy.   "I didn't do anything!"
"Alli, I'm sorry, but Anna said things were not going well inside when I was talking to daddy."
"Come on over here and sit by me and we'll talk about it."

I reached out to her. I was going to run my hand through her hair and give her a kiss, but she interpreted my action through a PTSD moment and began flailing her arms and saying STOP!
We both sat down on the floor and I faced her away from me.   I tried to just calmly rock her but she was really fighting me. At that point I hung on.  I didn't think she was rational enough to let go.
So....
She bit me. YEP, my ALLI Bit my arm! 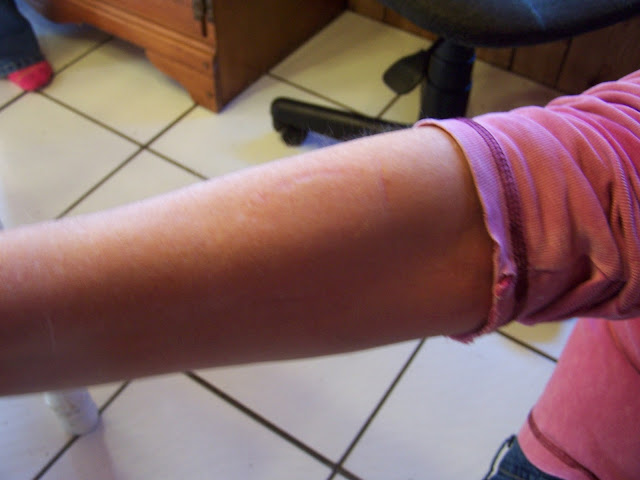 I was praying for wisdom the whole time, and when that happened something came over me that was a peace I cannot explain.  It was not my own peace, but a peace from the Lord that He was right there with me AND with her.  His LOVE took over my heart and it was overflowing with compassion . :)
She was latched on, and I gently whispered, "Alli, you are biting my arm... it hurts. I Know you don't want to hurt mama.  Can you let go?"   and she did.

I turned her to me, and I said, are you worried?  And then it all poured out.... she was terrified we were going to get rid of her.  She was moving and she had no idea where.
"Sweetie, you aren't going anywhere!" NOWHERE!
Then, I rolled up my sleeve.  She had left a slight mark, but nothing to write home about....I knew she didn't bite me like she could have, and my toddler bites actually hurt a lot more. :)
I was trying to remember that this is where she was in her panic, and she wasn't thinking.

I showed her the mark and I said, "You are here forever, and I want you to remember this moment forever."  I  LOVE YOU PERIOD.
With that, she burst into tears  and cried a cry that she has never really cried before.  It was a relieved, cry, a deep cry, a grieving cry and a HEALING cry.  She kissed my arm and hugged me and said how very sorry she was.
"I know sweetie." "I know".....
My insightful Anna, brought over a bottle of warm milk and Alli drank it in my arms.  We rocked and I sang to her the Masterpiece song.... Her favorite.

She relaxed a deep relax.  And then she was ok.  But not just ok, not hypervigilant ok but peaceful.
We prayed together, and then life went on as it usually does. :)

BCLC works to get to the bottom of behaviors, not try to punish the behavior itself.  I think if I had reacted instead of responded, and punished Alli , she would not have been open to the truth like she was, once she allowed herself to be vulnerable.   She asked for forgiveness with a most contrite heart and she prayed for forgiveness also.  Isn't that the POINT we want our children to come to?  Don't we want them to repent?  There was no reason for a consequence....  We had a discussion later about kindness and unkindness.  She also apologized from her heart to each of her sisters.
We are continuing to see much progress with our sweetie.  I cannot wait for the day when her past no longer stomps on the present.  That day WILL come! Yes it will! :)

(on a side note)  Anna is watching many behaviors that SHE had when she first came home, relived in her sister, and it cracks me up that she knows just what to do.  She is going to be an awesome mother some day. :)  She is already an awesome sister.  I am also just amazed that my girls are such a great team.  They do not judge each other, and they are so compassionate towards each other.  I wish I had been 1/2 that compassionate with my own sisters when I was growing up.

Anna never ceases to amaze me!

And, yes, Alli WILL heal...just as you have. Praise God we have the hope of inner healing! :D :D

That was such a beautiful post. I need a Kleenex. :) I find myself wishing that my experience would have been as blessed as what your girls have now with you and Mike. You have such a wonderful gift, and are a blessing to all whose lives you touch, mine included. Thank you, and praise Jesus!