I am so proud of my little girl.  We ALL are!  She is doing amazing.  We hit our 10 month mark on January 2nd. :)  I am thrilled to say that Miss Alli is sooooo Hooome!

Other than the incident a few weeks ago due to some insensitive comments made, we have had no meltdowns.  She has been a delight to everybody.    She and I are home sick today from Church, so she is snuggled up on the couch drinking hot tea and watching Super Book cartoons.   :)

We had a chance a little while ago to talk and reminisce.  I showed her the Russian Orphan Light House Project blog and explained to her that the hosting program is how she was able to come in the first place.   We tried to go back and find pictures and boy did we find a few! Yea! She saw a picture of her sister and her first family holding up a sign waiting for her sister to get off of the plane.  (November 08)
Then,  she saw a picture of herself in that famous bow!   She smiled and said, "Don't they ask to put pictures up?"    She would LOVE to not have that huge bow in her hair. LOL
She could not remember the name of her orphanage, so we emailed the director of the Light House project.  She emailed us back a few minutes ago.... :)  We now KNOW where her orphanage was!

"The name of the orphanage is Yolotchka, and the town was Shumerly, in the Chuvashia region of Russia."

I don't know why I didn't think to ask before! LOL
As we sat together, she was so calm and relaxed and pointed out a few people she knew, and then she said, "You know what mama?" "I hardly ever even think about them anymore."  "It doesn't bother me anymore."  "I love my family."
She is so pleased that she is a Minich.  She is so pleased that she has been here for 10 months and that her birthday is next month!

So we started discussing what kind of cake she wants. She gets to help bake it, which is tradition and she is totally thrilled by that.  I think we have decided on a chocolate torte with a mixture of creme cheese and nutella for filling, with a chocolate ganache for the icing.... and sparkler candles.
Daddy will be getting a cheese cake.  His favorite.  (their birthdays are on the same day)

Alli has grown so much I cannot keep track..... she has gained OVER 10 LBS and a few inches.
She woke up yesterday and both Mike and I thought she had grown in her sleep again. LOL

She has improved so much in her personal skills.  It is no longer a battle to get hair brushed. Erika has had a huge impact on her in this area.  She takes good care of herself now.  I get a sense that she really cares about herself, much more than she did before.

She is probably one of the most creative kids I have met, who can take paper, tape, crayons, scissors and make nearly ANYTHING.  She even made her own envelope to send a letter, and it was a really great job!

Today, she wanted to make a TV for her Barbie Dolls, so she took some old styrofoam and made a TV with "The Little Mermaid" on the screen. LOL 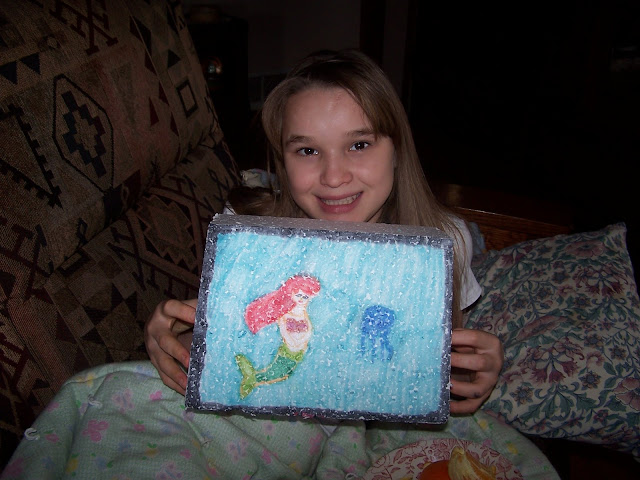 She is amazing :) Great job on the barbie TV, those barbie dolls have a BIG TV :)

I love the idea of the Lighthouse project.... It seems so odd that things would have happened for her as they did, but thank heaven she ended up with you.