Lost and Found : How to Lose Things Without Losing It!

Miss Alli learned a very good lesson today.  It was a lesson in losing things, and learning how to find them without all the drama of "losing it."  That does not mean she didn't "Lose It" , stomp down the hall and slam the door.....but the good news is, she stopped herself, apologized and restarted.

Here is what happened:
God has such a neat way of preparing us for object lessons. :)  DADDY, could not find his wallet or his keys this a.m. He was supposed to go and volunteer at the church today, and he couldn't leave.  We retraced his steps and found the keys and wallet, and all was well.  Daddy is not one to "lose it" when he loses things.  He simply looks, and retraces his steps. In fact, several of us helped him. Even though it is frustrating to lose your keys or wallet, he is always even tempered and doesn't get upset.

Alli witnessed that scene this a.m.  And I think it is a good example of "modeling" the behavior you want your children to have.

Fast forward to last night:
Alli and Sarah LOVE to hide when daddy goes and gets pizza for Friday night, keeping watch for his return. Then they like to shine a flashlight or take a picture. It is a silly family ritual that has been going on for YEARS in the family and Alli was introduced to it when she came home.  Honestly, I don't understand why hiding in the driveway is so exciting, but it is . :)

Alli's camera, the one Erika gave her, was not charged up, so she asked Erika if she could borrow her new one. (the one she got for Christmas)  Erika said yes, and then Sarah and Alli ran outside to take a picture of Daddy and Anna coming home.

Everybody came into the house holding pizza boxes and Daddy announced the movie for the night. It was a big surprise to all, because it was HIS TURN to pick! :)
So when he gave the title, I went back to the DVD closet to get it.  Alli and Sarah followed.
We then had  a fun movie night and all was well.

The girls carefully planned the events of today, even making an exact schedule!  Today was called "Camp Day".  They were recreating summer camp and had all these  "events" planned that Erika would film; with her camera.  But her camera was not in her room.
She remembered Alli borrowing it last night, and that is when the issue started.  Erika asked Alli for her camera so they could start.
Alli said, "I already gave it back to you last night."
Then Erika said, "I don't recall that.  I don't have it."
Alli then repeated, "BUT I GAVE IT TO YOU!" "I DON'T HAVE IT!"
Her REACTION was over the top defensive and she was not concerned about Erika's camera or that it was missing. She was only concerned with her own reputation.

I stepped in and inquired to make sure I understood the situation.  Erika quietly told me that Alli borrowed her camera, last night, and now it is missing today.  She doesn't know where it is.

I was going to ask Alli to retrace her steps, but in her mind, everybody was against her, we all thought she was lying and nobody believed her.  SOOOO came her over the top reactive behavior....She went stomping down the hall saying, "You don't have to believe me if you don't want to!"  SLAM! (door)

We have been doing SO WELL, I hated to see her fall back on old behaviors, but I also know that not being believed is one of her triggers.
We are in a new phase of her healing and I can be much more direct with her now, than I could last year.
So, I went ahead and walked in her room . She was sitting on her bed.  I lovingly, but firmly said,  "STOP living in your old family and remember where you are!"
The look on her face changed quickly!  And she said, "But you don't believe me!"
I said, "Alli, I believe that you think you gave it back to her. Just like daddy THOUGHT he put his wallet and keys in a certain place."
The camera is missing. Erika has no memory of having it.
So, just like daddy retraced HIS steps, we have to retrace OURS to find Erika's camera!
Looking for the missing camera is NOT saying I don't believe you!  BUT.... the camera IS missing.
Is it possible you THINK you gave it to her and you didn't?  She thought about it.
And then she calmed herself and joined the family to retrace the steps of the night before.

It was like a Nancy Drew clue movie. :)  Anna was asking questions and the answer to one of them determined that Alli had indeed brought the camera inside and even showed Erika the picture she took!   Erika was at the computer desk when that happened, but her camera was not on the desk.
Next clue:  Daddy announced the movie!
Sarah, Alli and I went to the DVD closet.  Anna declared, it must be in the closet!
We went back there, and there was the camera on my dresser right by the edge of the closet.

Alli had indeed NOT handed the camera back to Erika, but had shown the picture to her and then in the excitement of finding the movie, ran back to my room camera in hand, she layed it down and forgot about it.
She was stunned at the find.
"I guess I didn't give it back to her!" She was really sure she had, and faced with the facts that she hadn't.  She realized that her memory was mistaken, and she said,  "I'm really sorry mommy."
Last year, had something like this happened she would have tried to pin the blame on somebody else, but she didn't!  She took responsibility and I was so proud of her.

I seized the opportunity to held her  learn a deeper lesson  about how loving families operate.  We support one another. When somebody's personal property is lost, we all care and join in to find it because we love each other.
We are all on the same side; we are a TEAM!

I also had the opportunity to talk with her about the "Losing it" behavior.  "You don't have to do that anymore. We love you.  I know you didn't try to steal it. I know you weren't intentionally LYING, or trying to hide what you did."  BUT...I am sad that you thought that is what I was thinking.  And that my dear is something you are going to need to work hard on.  You need to stop those thoughts that say that we think you are a liar, or a cheater or that you can't be trusted. YOU ARE NONE OF THOSE THINGS.
You need to TRUST that WE LOVE YOU and that We think GOOD about you!  The truth is, YOU didn't trust ME today. YOU are the one who didn't believe ME!"
(I could not have been this direct last year)
And with that, she was VERY sorry and repented, with  a true repentance.  She asked if she could go and apologize to Erika, which she promptly did.

We have a long ways to go when it comes to learning to care for things. But we are moving, quickly in the right direction.  Alli also knows we love her, but has layers of hurt upon hurt that will continue to surface in self accusation and insecurity.  At the opportune time, we will have the honor to deal with them and continue on the road to healing. .  The Lord will help her, and He will help us to help her too.
Last year, or even 6 months ago, this could have turned into an all or several hour event.  Today, it was less than  3 minutes.  THAT IS AMAZING!


It is just another peeling  of the onion. :)

Camp day started on time, and I am sitting here a little teary with joy, watching my girls have such a wonderful time with each other.  They are laughing and playing and Erika is filming it, all as planned. :) 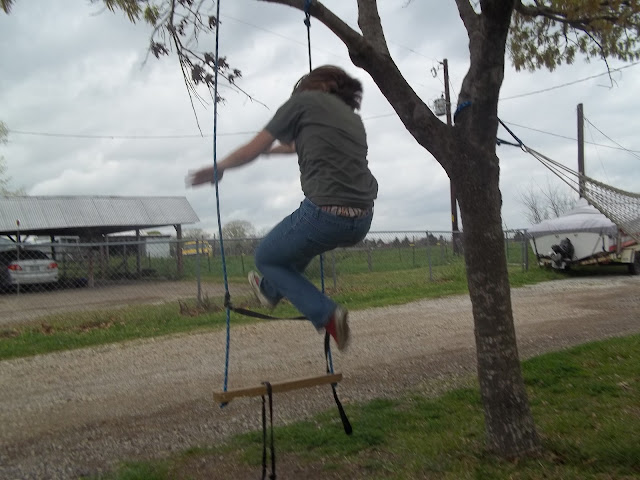 SOME HOW I MISSED THIS! Glad I didn't see it! YIKES! 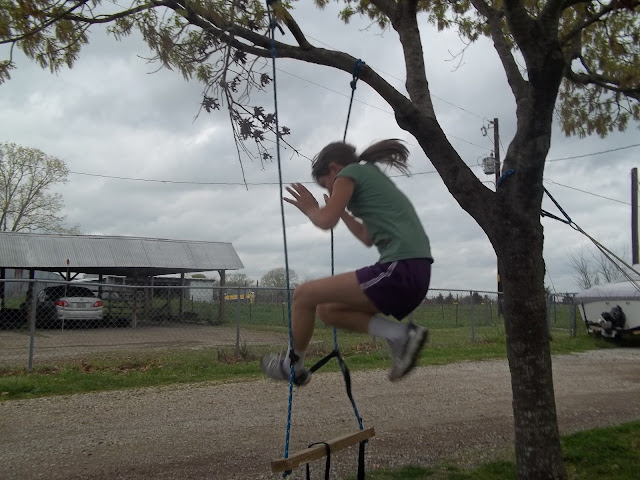 I would have to call this the "how to earn a trip to the E.R. game! 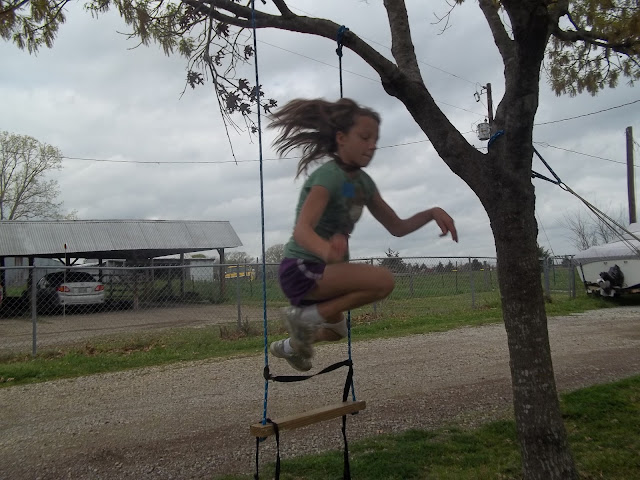 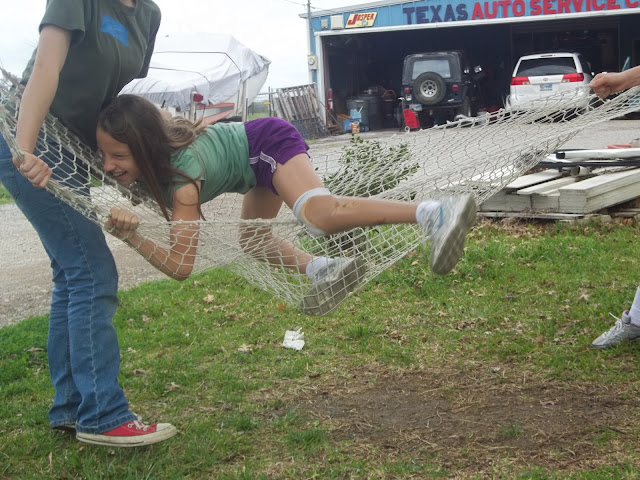 I think this was the spider web game. 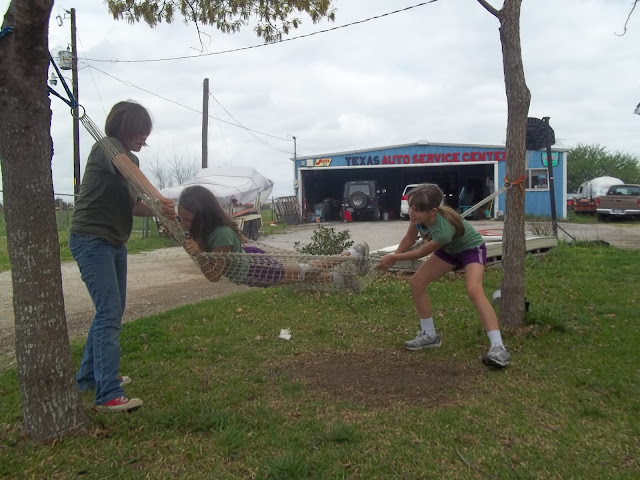 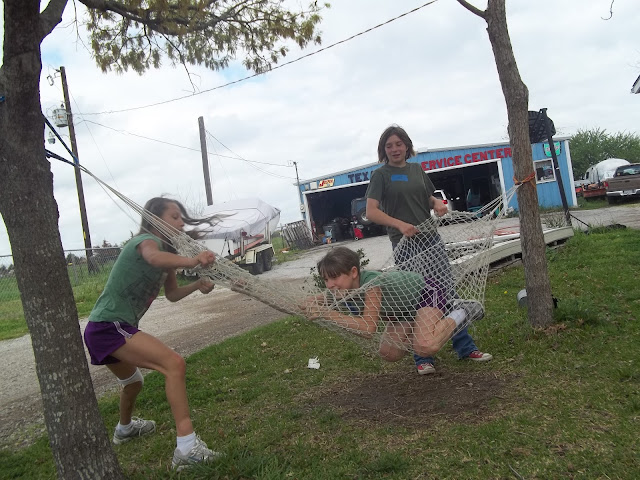 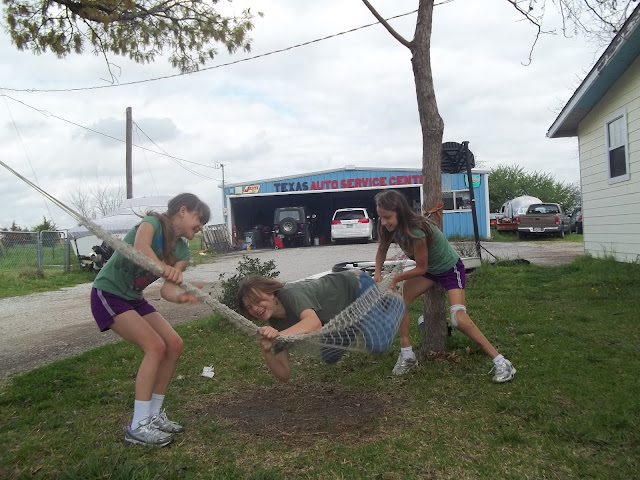 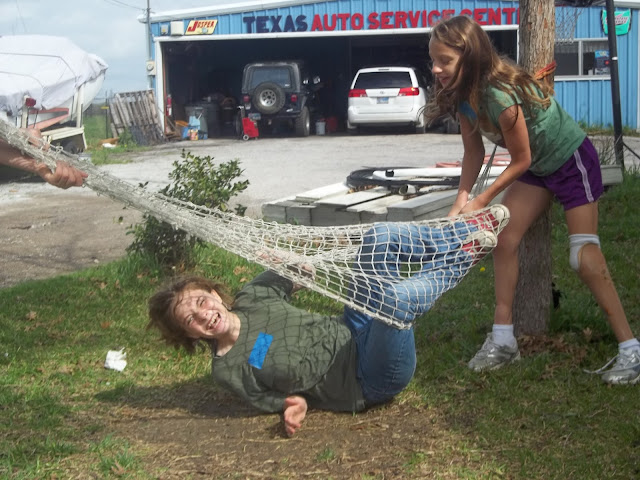 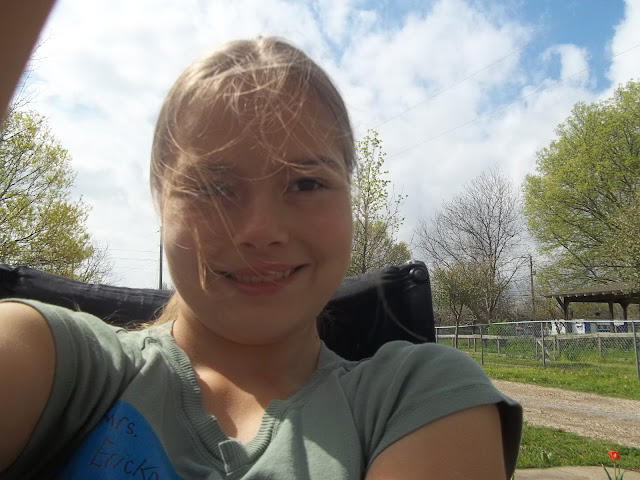 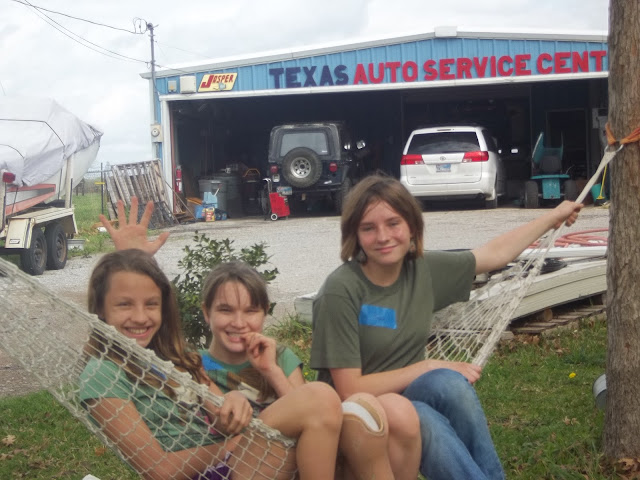 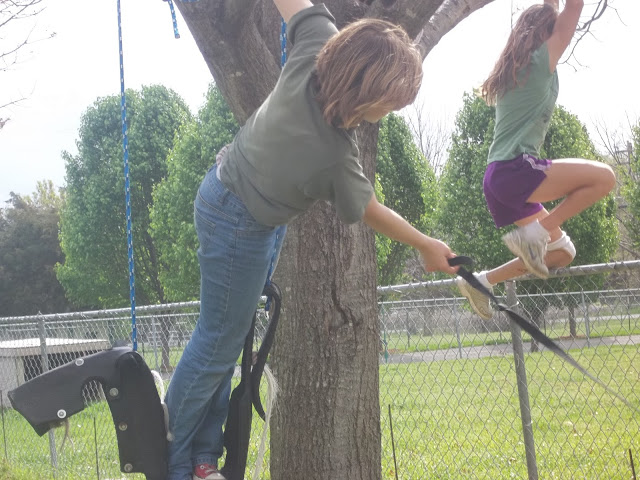 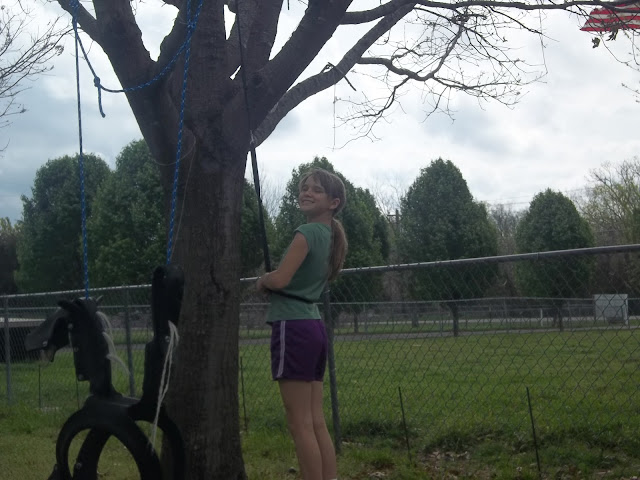 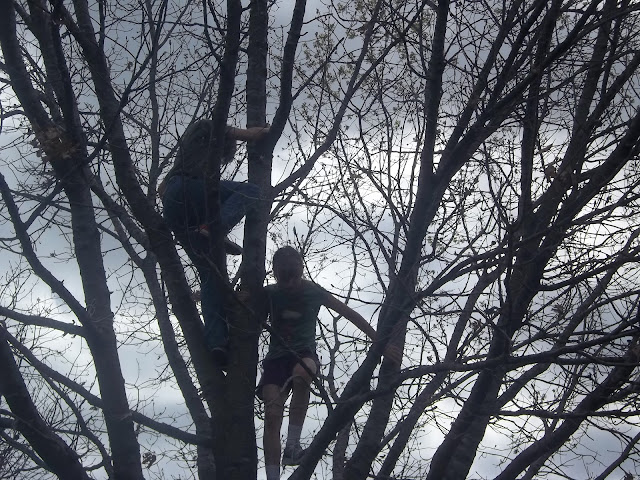 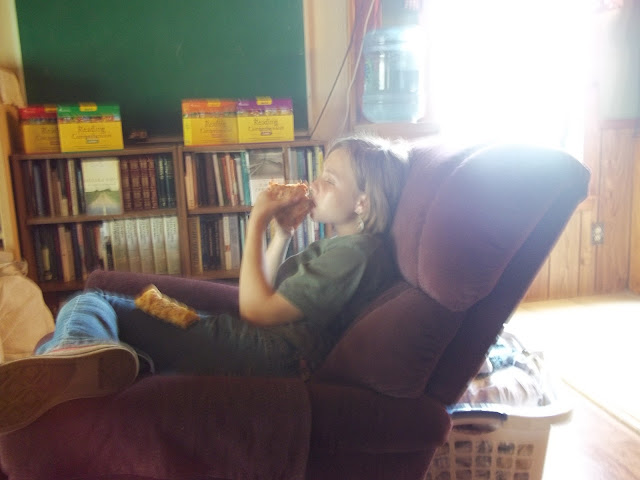 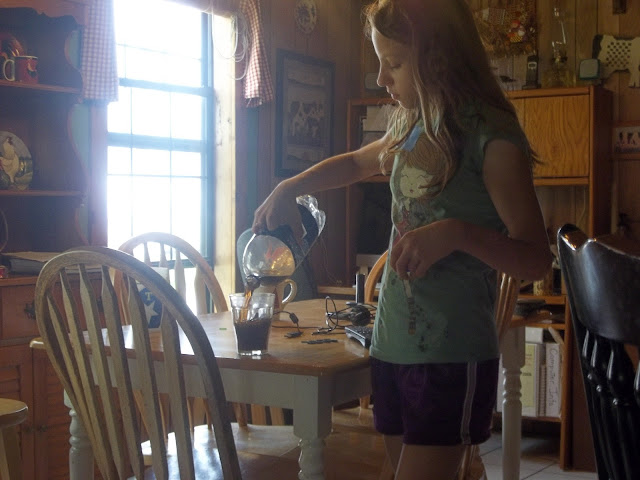 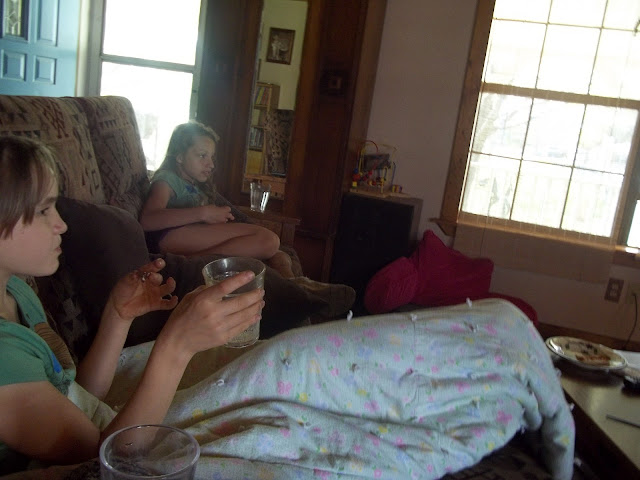 This is an example of the kind of post you write - explaining good parenting skills, with a story of how it works in real life - that are SO helpful to me. This is SUCH a great example of how horrible full-family melt-downs can occur, and how one was prevented through great parenting!

Do I see that the girls have a sort of "camp uniform"? How dear.