In working on my outline,  I was going over some notes that I had written about our earlier years with the girls, before Alli came home.  I forgot that I had already blogged about teaching Empathy.  So, instead of re writing it, I wanted to add to it, and update it.  Here is the original post. 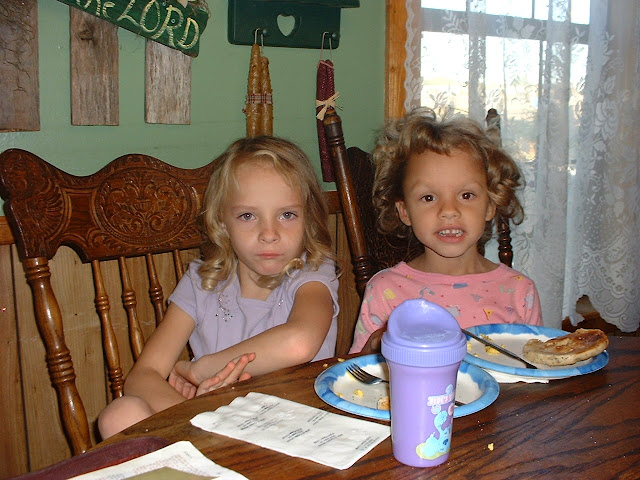 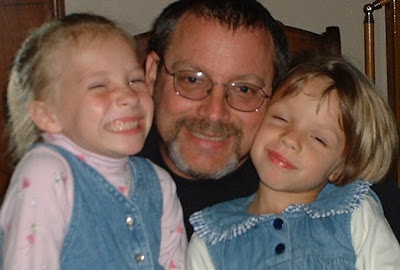 I came across a Time Magazine Article today through CNN's Website.

The article was Titled "How Not To Raise a Bully". It was about modeling and teaching empathy to our children.

There was a significant part of the article directed at children who have been neglected or raised in orphanages or foster care.

I found this to be very interesting and in line with our own daughters. I did disagree with the article on one front. They said that empathy cannot be taught, but it must be caught"..... I believe it can be taught and caught. We can teach it through role play. Our children will catch on, through our own concrete example. They will mimic and follow what they see, especially if teaching and role play go along with what they see in us.

This is how we managed to teach our own daughters empathy.

It became very apparent to me over the course of a couple of weeks that our daughters did not understand empathy. They did not know what to do, or how to react when somebody else was hurt.

In the first situation, the girls were playing outside. Anna came running into the house out of breath. She seemed to be searching me out for a big hug. I thought, cool.... sat down with her in the rocking chair and she was hugging me, but breathing rather hard. Something was not right, but she never said what. After a couple of minutes, I asked her, "Where is Sarah?" She had this glazed look in her eyes and she said rather dryly, "Oh, she is in the driveway crying. She fell and skinned her knee."

I could tell by Anna's reaction that she was scared. So we both held hands and went out to check on Sarah, who was in the driveway crying, because she fell and skinned her knee, just as Anna said. :)
My thought was, why didn't she tell me?" But I didn't ask that. I didn't want to shame her for not saying anything. She was obviously upset, but not in a typical way.
Just heavy breathing.

About a week later, the same thing happened but in reverse. This time it was Anna who was crying, and Sarah who came in with a look on her face. Somehow, this time I knew to ask, "Where's Anna?" So, we repeated the driveway experience. :)

It dawned on me, that the girls, for whatever reason....most likely neglect and fear, that the girls needed help to learn what they missed; what seemed to come more naturally to the boys.

So we did some role play. They had great fun pretending to get hurt and getting REAL bandaids. They loved being asked, "Oh sweetie, are you ok?" They liked pretending to be mommy, but also learning to ask if somebody else was ok. Because of that role play, they learned to take care of each other. 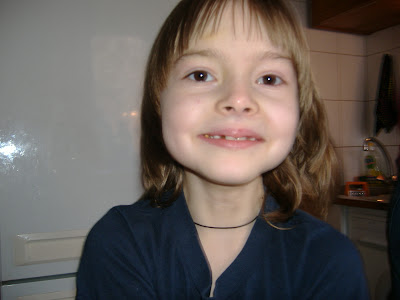 After she had been home for about a week, I left for the first time to go to the grocery store. The girlies were all home with Daddy. He was working on the front porch and Erika had come in to go to the bathroom. Sarah, for some reason was inside blowing bubbles in the bathroom mirror.
When I was bringing in groceries. I heard a loud thump. I knew it was Erika, falling somewhere.... I went to open the bathroom door, but couldn't get it open. I could look through about 2 inches. It was just enough to see this scenairo: Erika laying on the bathroom floor quietly whimpering. Sarah blowing bubbles in the mirror, as if nothing had happened.

So I inquired,"Um, Sarah, do you see your sister on the floor?" She said, "Yes mommy, but she is just too big for me to move!" LOL I realized, she had not connected showing empathy to everybody, just to Anna, because she was shown how.

So, through the bathroom door, she and I asked Erika, who spoke no English at this point if she was in pain. "Bolitz"? "Nyet". So I asked Sarah to try to slide her back. She did, and we rescued Erika from her predicament. :)

We then ALL had brush up lessons on empathy.

I am happy to report that though it had to be taught manually, it now seems to come naturally. 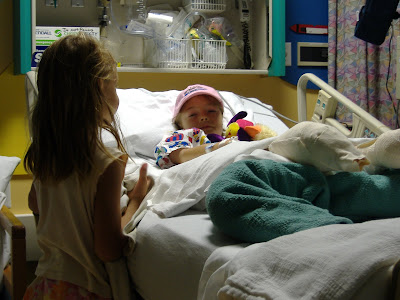 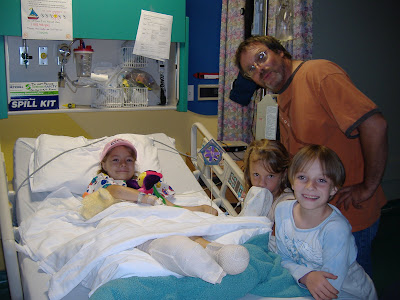 Role play can be a huge help in teaching our children how to respond in social situations that can make them feel fear.  When you role play, it takes the mystery of "what to do" or "how to respond" out of the equation.  Information is very empowering.  And when our kids are empowered with information, fear disappears.

Instead of spending all our efforts in worrying about our children's SEEMING  lack of empathy, we need to get underneath the root cause, and discover that by understanding how trauma and fear can permeate every area, it shouldn't be surprising that our kids would lack empathy.  I would say it would be the rule, not the exception!
With that in mind, as parents, it is just a new phase in their lives that give us an opportunity to  to teach and pour ourselves into them, WITHOUT SHAMING THEM.
.
I think that is a real KEY.  For our kids to learn something new and scary, SHAME, which comes upon them so easily or ANY TYPE of SHAMING to curb behavior MUST NOT BE IN OUR HOMES.
Children cannot learn properly or positively, by being shamed.
Looking at each new situation in a light of opportunity to make a difference in our children's lives brings about positive change.  When we are our children's ROLE MODELS, they will learn by watching us.  Be careful what you model!

Before Alli came home, we discussed bullying, and we discussed the proper way to express one's feelings if we were to get upset at another person.

NO PERSONAL ATTACKS ALLOWED, EVER.

One of the things that impressed me about Alli was that even though her background of chaos lasted much longer than the other girls,  (11 years and one month), she somehow had managed to learn to empathize WHEN she was regulated. (dysregulated was another story altogether)
I wonder, if this is because she was in her biological home for  her first 7 years instead of rotting in a bed?  Or could it have been that she was just older?  I honestly don't know the answer.
Her home was certainly abusive, but even in abusive homes, there are times of nurturing.  Even a little can go a long way!
She spoke often of the abuse of the past, and never mentioned the kind moments.  From her truthful accounts and visible scars, my guess would be that her home was not very nurturing.

I worked hard to try and draw out the positives of her former families.  Each one, including her biological family had shown her some kindness and affection, in their own way.  We worked hard to focus on those, because a heart that dwells in negativity and  continually looks at the past, cannot heal or be "others focused".
Once Alli began to freely be able to say something nice about her first mom and dad in Russia,  I saw some changes in her very quickly.  She was able to also mention some positives about her former families.
Her dysregulation,  during stressful moments, was our biggest obstacle in teaching Alli proper empathy.    All of the hard work  has brought about great fruit in her life this year.  She thinks of others even if she has dysregulation.  She is able to control herself and even show compassion, sorrow and empathy WHILE dysregulated or stressed.  I find that rather miraculous. 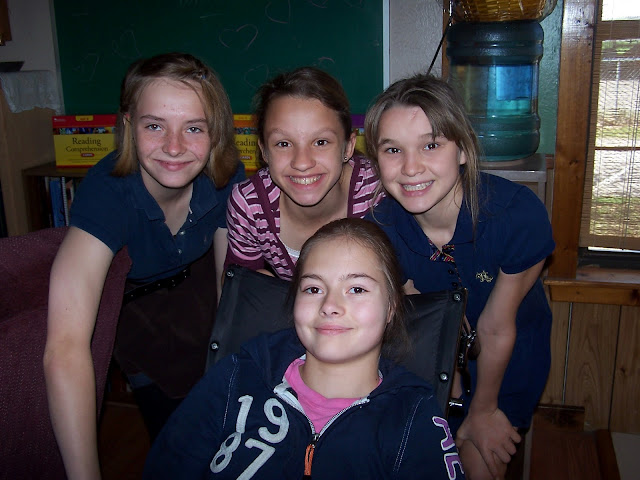 (Erika, home from the hospital)
I have seen my girls become compassionate and caring towards animals and people alike.  This to me, is a miracle witnessed.
Since Erika has come home from the hospital, they have all chipped in to help her, play with her, talk to her when she is not able to go outside, and even taken her outside to go for a stroll.
Anna has even helped me get her into the bath for a great soak.  Sarah slept next to Erika last night, just to be with her.  Alli has offered to sleep by her too, so she is sure she is ok.

There IS HOPE and HEALING!
Remember, "If it doesn't come naturally, teach it Manually!"

SO many questions about this post!! Where to begin??? Okay, how ADORABLE are those Little Girls of yours?! I sure wish they could stay little for a longer period! What was He thinking, when He made Newborn-18 months such a short period of time and Teenagers for 5-7 l-o-n-g years? : )
The hospital photos are fun to see them at 2 different ages. In the one where they were younger and Anna was leaning on the hospital bed...was that her Blankie that she was holding onto? There's something sweet about kids having Blankies or Lovies. That would also be cool to know, especially since A spent her early years in a Baby Home. I've never heard of any adopted EE children who had special things at the orphanages. So it makes me think that she was given something special by you and she grew and had the ability to bond with something that gave her comfort. Tell me if I'm wrong!
Christie, I've been wanting to talk to you about Erika's blog. I've read it a couple of times and I'm concerned that she has some things on there that make her identifiable. Her last name, for example. The state she lives in. And, that she is an amputee. I only share this, because there are very strange/odd/weird men who call themselves Devotees. They have some sick thing about women amputees. It makes me feel sick even to think about it!
Erika does a great job with writing, so she should keep doing it, but maybe you could remove anything that makes her whereabouts known to others. I only want her safe from any kind of harm.
You don't have to post my comment, as I don't want her to read it. It might frighten her.
Last question! How is her hip and surgical sites? Is she having less pain now? Did they do only her hip or did they also do the other procedure, too? She has been in my prayers. Hugs to All!

Jo, That was Sarah with the Blankie and we picked it up on the way home from picking her up. :) She still has it! :)