What's Behind the Behavior...? 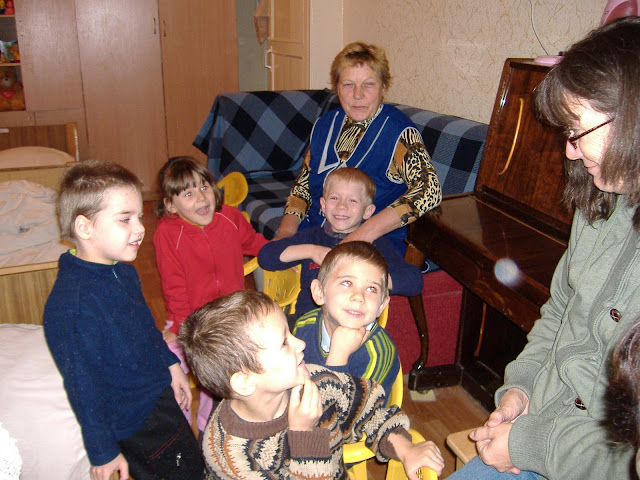 (I picked this picture because of all these little hopeful faces. This was taken from our missions trip back to Ukraine a few years ago, and was at Erika and Sarah's old orphanage.  The little boy in blue, was so sweet and cute and smiley, talking in Russian.  He was actually saying, "I'm going to take your glasses and break them!")
Heather Forbes might say, "What's driving the behavior?"

I was talking with Mike this morning about how support group is going, and things I would love to cover.  One of those things has to do with what is behind a behavior  that isn't making sense to us.
Putting clues and signs together, may help us come to understand and then be able to address the behavior.  But for many of us, it does not come naturally to think about ,"What's BEHIND the behavior".

For the child who struggles with shame, low self worth or past trauma,  being exposed to failure is overwhelming, because it requires self inspection, and when they don't like themselves, or have a strong sense that others are going to reject them because of their seeming failures, or they are so full of shame they cannot bear it, then it is PARAMOUNT in their minds that they NOT deal with the reality they  are faced with (real or perceived) and do everything to avoid it.  They will fight to keep a semblance of self respect and perceived self worth through diversion.

"I'm NOT going to do that!"
"Why"?  we may ask.....  There will be no real answer.  We will perceive their behavior and tone as DEFIANT.... and if we move to "correct that defiance" ,   the battle that rages will be ALL ABOUT THE WRONG THING.... We will strive to win a battle, yet lose the WAR that is actually being waged on our children's hearts.
The REAL WAR is against their very being.  The WAR that tells them that they are unlovable, unacceptable, unworthy... the war that has been waged against them from the very first point of trauma in their lives. For many of them, it began at birth, and EACH battle along the way was WON by that war with damning, condemning force.

So here we come in, a new force, and they see us as the enemy. They see that others who have been in our position as a parent have rejected them, hurt them and  betrayed their trust. They are so busy fighting in their own personal war, they don't realize that the true WAR is actually over.  They no longer have to fight for love, for  validation, for acceptance and we are ON THEIR SIDE!

Unfortunately, many times we act as if we are not.  We get caught up in the remnants of a dead war, and try to win an unwinnable battle, instead of leading our little trooper to a place of peace and rest.

How can we deal with it?
I remember when Alli first came home, I was told she was in the 4th grade, understood English perfectly, and was fantastic in spelling and math.   I pretty much found ZERO of that to be true.
How did I find that out?   Well, it didn't take long. :)  I assigned her to write a paragraph about something we were studying.

And guess what she said, oh so "defiantly"!
"I'm NOT DOING THAT!"
Why not?
"I don't want to!" "School is stupid!" "This place is stupid!"  "You are not a real teacher!"  and I could go on.... but my favorite was, "Why should I have to listen to you? You're just an old woman from Texas!" :)  gee thanks. :)
In REALITY, she was trying to avoid the FACT that not only could she not spell, or write, she could BARELY read, AND she had VERY LIMITED understanding of the English Language. And she didn't trust me. She had no reason to.  I was the old lady from Texas.
Add to that TWO disruptions, past trauma, separation from bio siblings (I could go on and on ) and  I could instantly see that we were not dealing with writing a paragraph.  She was fighting for her very dignity.  After all, what would it look like if the new kid couldn't even put 3 sentences together?  Would she still be loved? Would she be accepted?  She didn't believe for a minute that she was even going to stay.  She didn't stay with anybody else and they all promised her a "forever family".

So what did we do?  Well, the first thing we did was establish relationship.  We headed for the rocking chair.   "It is ok.  We love you.  We are here for you.  Breathe with me.  Let's become one in our breathing.  And after about 10 minutes.  I addressed the issue with structured correction and teaching.
"You know, maybe the truth is, that you don't want me to know that you don't even know what a paragraph is!"  I got a nod on that one.
"I am so sorry.  I didn't know, and you know what?  It is OK.  This is NOT your fault!"
"Did you know that your brother didn't learn to read well until he was almost 12?"  With that I got peaked interest.  Guess which one~!
"The school teacher!"  LOL

In calming her and peaking her interest, I was then able to talk to her about the defiance in her voice and what she said.
"You know, it is never ok to speak harshly to mama.  It is never ok to say "I won't!" when I have asked you to do something, because I will never ask you to do something wrong. (that is important they know that, because they may NOT know that! never assume)

Now, instead of saying "I won't!" How could you have said things differently to tell me what was really wrong?
At first I got shrugged shoulders, and then I offered an idea, and then she did, and then I offered some humor and then she did.... and before we knew it, the REAL PROBLEM was revealed and SOLVED for the moment.  (The assignment was too hard for her to do on her own, so it was adjusted to her level)
Was there punishment involved? No.
WHY?
Because she apologized for her behavior and because her behavior was SHAME masked in defiance. She was trying to protect herself from more rejection and hurt. How do you punish shame? How do you consequence shame?  I can't.  I can only have compassion and understanding.

That is a small example of many MANY examples I could give over the past 15 months.  But each and every time, a battle was won. Not us against her, but ALL of us against TRAUMA, SHAME, REJECTION and HURT which is the real war.    We were on the same team the whole time. It just took her a while to see that we were her allies and not the enemy. :)
(Do we do this perfectly every time. NO. We do not. Sometimes we get caught up in the moment and forget.... but that is ok, we are human, just like she is.  When we see we have gone down a dead end, we simply stop, turn around and head the right direction. :))
Those times of outward defiance are few and far between.  She has learned over the year to express herself properly, understand better and use her tools to keep control.

As she realized each time that we were on her team...we were her ally, the trust which was greatly needed began to be built, not with faulty walls, but a firm foundation.  Each brick cemented in with love, to last a lifetime and to build a new life upon.

For my support groupers:
I would like to ask that you keep track these next two weeks of how many times this week that your child(ren) are masking what is really going on underneath.... try to see what is driving their particular behavior and write down your response to it.  What were the results? :)

I would like to encourage my readers who are in the TRENCHES with trauma, that it gets BETTER. You will not stay there.... but you must look beyond the behavior and beyond punishing.  If what you are doing is not working.... it is time to try something new. :)
(This does not have to do with natural consequences, that is another post altogether, and natural consequences are not punishments)

You make me want to cry....with relief (that intuitively I understood what was wrong) and guilt (that I wasn't paying enough attention to see how unfair I was being to my daughter) and gratitude ( that there is SOMEONE OUT THERE who understands)!

I see so much more about our situation now - it is amazing how much I presume, assume and act so carelessly on....mainly because I am busy, I guess. Ths past month, when I should have been attending to this entire situation, I left the home teacher to do it, and foolishly "trusted" her. Yet, if anyone had looked me in the eye and asked me to tell them about her and how she taught Anastasia, I would have just laughed. The entire situation was absolutely absurd. Ridiculous - and yet I just hopped on that bandwagon and put Nastia in a terrible spot because I wasn't thinking about her needs or truly loving her....I was just trying to have her "look good" for people who don't know a single thing about her. Nonsense.

And - yet - look how many people on my blog, understanding it even less than I do, were determined I needed to MAKE her do the paper.

Annie, once our kids finally find a place of trust and a haven to rest, the healing comes and stays! And before we know it, we are just "normal". What ever that is. :)