A Conversation With Miss Alli 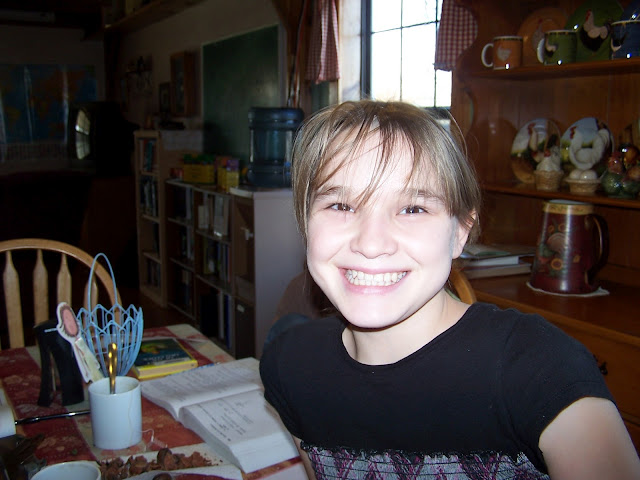 Today, I had to run some errands after dropping Anna off at the library for her volunteer job.  Alli asked to come with me so we could spend some time together.

So while we were out driving from place to place, we had a conversation that really to me is rather Miraculous.  That word gets thrown around here on this blog a lot, but truly , we live a miracle every day.
The fact that our girls live with us, in our home, HERE in Texas, that they are alive and thriving.... I am always reminded of God's mercy and grace and the miraculous work He has done and continues to do  in their lives.

Let me back up..... Alli has been home for 16, almost 17 months.  She was 11 years old when she came, after being removed from her biological parents at 7, put in an orphanage, adopted into the United States, disrupted, adopted again, disrupted, throw in some respite care and some hospitalization  and , well, you get the idea.  All that was BEFORE we brought her home.

She was convinced for months that we would not keep her or love her.  She would start to get close and then run the other way emotionally.  But God's Grace and Mercy in her life began to show, and we saw little blossoms of love begin to form and take ROOT.

We were driving in the car and she was asking all about college and what different careers require for college degrees.  She asked about incomes of various careers including, dentist, hygenist, fast food worker, police officer and nurse.  I told her all I could about each of those and how much school they would take.  She recoiled at the thought of how long it would take to be a dentist, claiming she would be OLD by the time she finished school. LOL (Not as old as me! but I didn't offer that ditty of info.)

She then began to ask about lifestyles of each of these jobs. What type of home could this kind of job offer?  And she was neatly putting together a little life lesson that we usually put together in high school for economics!

She listed out some of her desires for when she is older, including owning a horse or two.  She carefully asked about working hours for those jobs and weighed out if she would have time to care for a horse and work too.

Wow! I was pretty blown away at this conversation, considering last year, she couldn't have held that type of conversation at all! Not at this level.

It is sorta funny.  Yesterday she said she didn't want to be 13 because people will expect so much out of you and you can't be rocked anymore.  When I explained she could be rocked no matter how old she gets and that one of the girls at church who is in her 20's sits in her daddy's lap all the time, she seemed to not be so anxious about being 13. :)
And now, she seems to be sliding right into those years where you begin to think about all the exciting plans for a real future!  She is looking forward and not in the rear view mirror. :)

That's amazing! So many adults could learn from skills like Alli's.


My friends and I have been playing a game recently that I think your family would enjoy too.

1)Each person has a piece of paper and starts by writing a sentence or drawing a picture.
2)Swap papers, if there is a picture describe it. If it's a sentence, draw it.
3) Fold over the top, so only the last picture or sentence shows and swap again.
4)When you have run out of room open up the papers and see how the first entry has changed.
It's very funny and the more people playing the better, so it's perfect for your family.

I'm still waiting on that type of conversation from someone in this house...not there yet

Claire! That is SUCH a great activity! I am going to use it for one of the classes I teach. Thank you.