Yesterday, I wrote part one of this series.   I want to cover several areas of discipline and what it looks like in our home.

Today, I want to write to you about ROLE PLAY.    I have written numerous articles on the importance of role play.  In the search engine, I came up with several, but not the one I was looking for! LOL   (Sometimes I think those search engines just don't work very well.... any ideas on that?)

Role play is engaging for our children.  We have been doing role play for many years, not as much with our boys, though we did do it some.... but CERTAINLY we have done it for the girls since Anna came home almost 9, yes NINE years ago!  (coming up in December)

When I ask somebody to do something, or see that they are really not understanding what I am saying, we try role play.  This has worked VERY well for all of the girls.  I need to do it MORE with Miss Alli.

When the other girls were smaller, I introduced them to role play just by playing in the van on a drive.
They would pretend to turn the channel on the radio, and I was the radio.  So every time they turned the channel, I had to sing a different song, speak in Spanish or give the news.  If they turned it UP, I had to be LOUD... If they turned it down, I had to whisper.... They LOVED this game!

This example can pretty much go for ANYTHING you are trying to teach them.

For instruction in respect, it can be a little more complicated.  Having the children by you and you be the children can always be funny and instructional.  There is nothing more funny than to see daddy or mommy pretend to have a tantrum, or say things that are often said by a certain family member.
Be careful not to be mocking.  But be real.
This opens the eyes of our children who really don't see things the same way.
Miss Alli has benefitted from this NUMEROUS times over the last 18 plus months, as her sisters did when they were first home.

I remember having to teach Anna and Sarah how to be compassionate through role play.  If sister is hurt, you always ask, "Are you ok?"  ( we pretended for one to be hurt and the other caring and then switched places)  They learned to come and get mommy if somebody was laying out in the drive way bleeding. :)

For Miss Alli, she has had to learn through role play, verbal instruction.  Her voice can sometimes sound demanding or rude and she doesn't like it.  She forgets, so role play has really helped her.
At first she would say, "I don't sound like that!"  And I would have to say, "Ummm, yes you do! And I know you don't want to!"

Practicing walking calmly down the hall, practicing putting dishes in the dish washer, practicing asking questions with the correct tone or complaining with the correct tone can DISCIIPLINE our children to be respectful, kind, and gentle.
Miss Alli's verses for this week is Proverbs 15:1  A gentle answer turns away wrath! :) And, Philippians 4:13-" I can do ALL things Through Christ who strengthens me."
I can role play with her about speaking gently vs. harshly and it makes the verse REAL for her.

Role play can also be used in learning chores.   This week, each of our girls are taking over mother's role in the kitchen.  I am offering LIMITED help. :)
They are having fun being "Queen of the Kitchen".
Tonight was Erika's turn.  By the End of the week they will have all had a day in the Kitchen.  I hope this helps them not only learn cooking, but how much work it is to prepare healthy meals for a family. 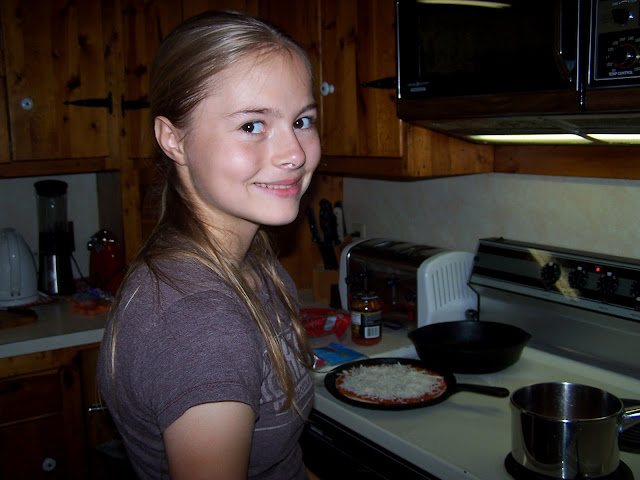