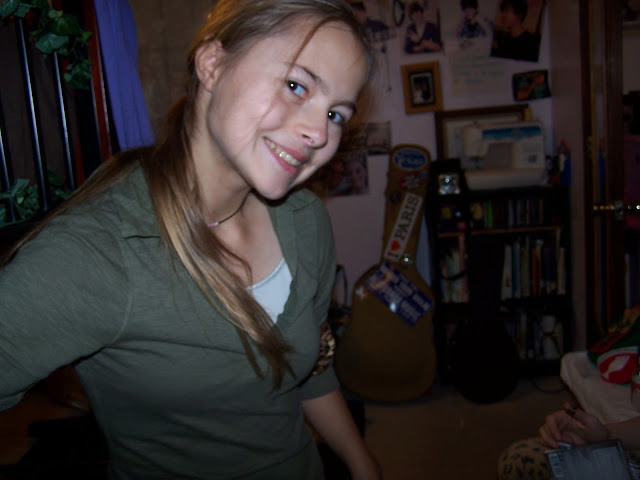 It is important to see this.  Erika had ZERO hope in Ukraine. The situation in Russia is pretty much the same.  Erika was ready to be sent to a mental institution on the very DAY our paperwork arrived at the orphanage.... that "Intent to adopt" paperwork.  The orphanage director emailed us.... "ARE YOU SURE YOU ARE GOING TO ADOPT HER?" "HER JOINT DON'T WORK!"
We assured him as soon as we could get there, we would be there for her. We had never met her. She was Sarah's best friend, left behind. :(

7 months later. SEVEN LONG MONTHS.... not NEARLY as long as many have to wait, we went to get our daughter.  She was already ours, we knew it. A love for her grew in our hearts as we gazed at the few pictures of her that we had.
That day came..... she came and sat between us, "My Matchika, My Papitchka".... the translator had tears. She said that had never happened.
Erika was nearly 8 years old, HIDDEN in the baby house because of compassion by the director. He didn't want her to go to that awful institution. His institution was bad enough!
Two days later, Erika had a terrible black eye. She was tripped by a worker; the same worker who cursed in our faces because she knew she could.  Erika told us through the translator.
We saw Erika struggle down stairs in ICE, barely being able to scoot in her famous "bricks". :)
She called her red shoes that, I'm sure that is how they felt. They were also about 3 sizes too small, as were her braces, and when we tried to help her, the orphanage workers scolded us and yelled NYET!
She had tears as she struggled to get around.
She was our baby and was being abused in front of our eyes. She had bruises on her wrists and arms from being grabbed roughly and yanked around.
The worker who cared for her black eye mocked us saying, "Your mama is fussing over your eye!"
We could not WAIT to get her out of there.
But we had to be careful. We didn't want to make anybody mad. But inside, my mama heart was burning.
When we were finally able to spring her from her prison, the first thing we wanted to do was give her a nice warm bath.  She was terrified to have her braces removed. Her stocking were stuck to her legs, feet at toes, where there were DEEP wounds on top of wounds. IT WAS AWFUL.  Poor baby was in terrible pain.  Once we got her in that bath, she was in heaven. She had never had a real bath.
She rocked back and forth at night to begin her sleep routine. My tears could not be contained.
The depths of abuse and neglect were so raw and real.
Children do NOT just rock back and forth because they like it. They have been neglected since BIRTH.
(Alli, as bad as her past was, does not rock, because she had a mother and father, brother and sister for her first 7 years)

My father in law Ed, put this video together of Erika. I am so thankful he did. :)  I miss him so much.
He died of complications of cancer treatment 3 years ago.
Ed LOVED Erika. :) He loved all the girls.  I wish he could have met Alli. He would have loved her too. :)
Erika has her own blog, you can see it from my side bar, or HERE.http://theadventuresoferikaminich.blogspot.com/

As you think about it... Pray for the children left in orphanages all over Eastern Europe who are without hope.  There is rumor that there is a bill before the DUMA that will allow for the adoption of Special Needs children.  Please pray this goes through.  Pray for those who voted for this bill, that hearts of compassion will prevail.
We adopted Erika in Ukraine during a ban on adoptions. BECAUSE she had special needs, we were allowed to go and get her.
Posted by Christie M at 11:43 AM

How you make me cry!

I wish we'd stumbled on the wonders of adoption when we were younger, and maybe we could have had even a bigger family. Every one of our children has been a blessing.

I think something of what you experienced may just be cultural differences. But, perhaps my children simply had better orphanages! I heard that Ivanovo did really work for their children. Some of the caregivers seemed more "harsh" but I think that was just their way, because when the children left they hugged them tight and cried real tears.

The plight of the handicapped children is real. I wish I'd known and perhaps we would have gone that direction at some point. My friend Alla visits a young man of 20 who was orphaned, with his twin brother, as young children (5 or so). The boy she visits, had a teacher who was so physically violent that he hit this young boy in the face and detached his retina. Eventually he went blind in that eye, and at about 10 in the other eye as well. (I cannot recall all the details - he may have had damage in both. They did try surgery, but it failed.) However, as is the routine, now handicapped, he was moved to the orphanage for disabled children - away from his twin brother, tragically. He no longer had a chance for any but the most rudimentary education and when he turned 16, worse yet, he was moved to a permanent nursing home, where his company consists of elderly and senile people, and those with severe mental disabilities. It is heartbreaking.

Annie,
Alli has fond memories of her orphanage. She said the workers were nice and fair, and the children did get to go to school.
Erika and Sarah's orphanage had a pre school program too.
Erika was learning how to write when she came home.
I think there were workers there who were kind, and then there were those who were NOT kind.
Harsh was a reality. And I do think that is possibly cultural.

What a beautiful, sweet girl you have! And what a blessing she is! Happy New Year from the Georgia Coffey's:)