Our Trip To The Euro Deli 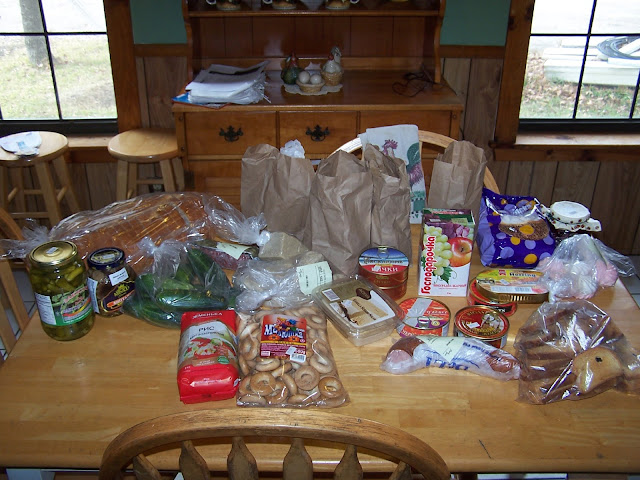 We took our quarterly trip to the Euro Deli that the girls affectionately refer to as "The Russia Store".
Comfort foods are part of our lives. :)  The girls LOVE to find things that are familiar from Ukraine and Russia. They always find something new. :)
And HALVA is always on the list.

I must admit, I was a little bit nervous this time, as Adoptions have been banned to American Citizens.  I didn't know if the atmosphere would be different. I couldn't have been more wrong!
The girls don't speak fluid Russian anymore and I know that was a little disappointing for the owner of the store before. He always questions them on their Russian.
Today was no different....He spoke Russian to them, and they picked up on some of it.  He also said that his own children cannot read or write in Russian but speak it, because they speak it at home.

This trip was also special, because the ladies behind the counter smiled extra, and,
when the  owner came up to the girls to give them all hugs, he then apologized about the ban and said he thought it was wrong.
He asked a few questions about the girls, something he has not done in the past, such as, where exactly they were and how we came to get them.  And he inquired about where Alli was before, since she hasn't been home as long.  When I told him, he took her by the shoulders and gave her a hug and then he said, "You are safe now! You are in a good family!"  "A VERY Good Family!"  :)   It was really touching.  She was beaming.

Everybody got a free candy bar , along with the rest of our stash. :)

I was so honored to talk to this man, and then embarrassingly said, Pazhalsta instead of Spaciba.  LOL  I really need to work harder on my Russian.
Oh well. :)
But we all said, Dos Vadanya!
Posted by Christie M at 12:14 PM

I'm so happy your shop keeper is kind to your family and sees the amazing difference you have made to their lives.
We have lots of Polish/European shops (and Turkish & African & Asian!)where I live because many people come to Bournemouth, UK to learn English or to work.

I really like the pickles and the fruit drinks, especially a pink grapefruit one.

In a school were I was a substitute teaching assistant recently there was a little boy in my kindergarten class from Belarus. I practised my limited Russian with him, he was so surprised and smiley when I asked him to clear up the "machina" (cars) with me and said "spaciba" when he finished. He started chatting away to me and I just smiled and nodded because I didn't understand! We both said "puka"to each other at the end of the day.

Oh, you got baranki/sushki! I really like them and even tried to make them myself. They looked nice, but the taste was wrong. And we have no Russian shop here, so I'll have to wait until next trip to Russia.... I see herring too, which warms the Swedish heart :-) Holiday food! Christmas/Easter/Midsummer - you'll always find herring on the Swedish table!
I'm so happy for you that you such a nice shop with such a nice shop owner!

Saying please instead of thank you is definitely not the worst mistake you could have made. :) I'm glad you guys got some good treats and had fun!

If you don't live near a russian store there are several online shops that deliver nationwide. Most if not all based in NY. I have not tried them as we can go to Brighton Beach but for those who can't.

We have too our sussia store, it is a van that weekly comes and goes to Ukrain to bring comfort food to our beloved caregivers!