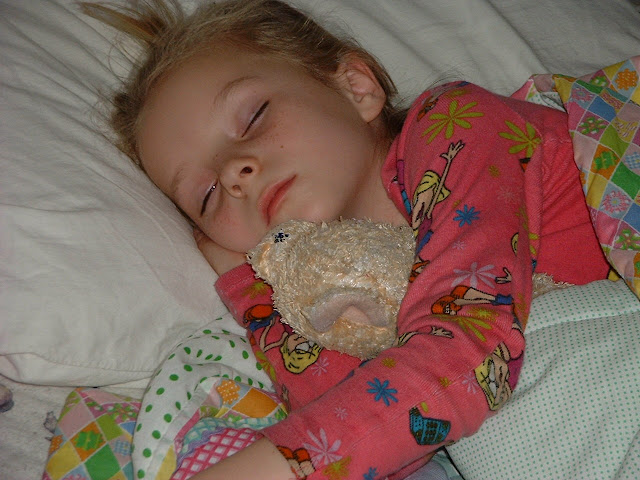 Every morning, Sarah, lovely little lady that she is, gets up before everybody, puts on the family pot of coffee and then comes into our room to snuggle. It is one of the most precious family rituals that I will always remember. :)

The boys used to do this too, but they were too little to make coffee. They all wore blanket sleepers and would come in and I would wake up with four little boys all snuggled all around, peacefully sleeping. :)
Those are precious memories.

But, not so long ago, nights were not so peaceful.  Our girls each struggled with going to sleep and with  HORRIBLE nightmares or night terrors.
Anna had so many worries and struggles when she was little, and it was hard for her to get to sleep.
Then she would wake up with fears.  It took awhile for her to get through that, but she did.

When Sarah came home, she was able to get to sleep snuggling up with Anna, but then.... she would wake up to the worst nightmares of being cold and hungry.  In the middle of July she would wake sobbing.. "I'm sooooo cold!"  She wasn't really awake; but somewhere in between. It was heartbreaking!
We finally got every, single blanket that would fit on her bed and put them all on there telling her they were ALL HERS and she would never be cold again!  She was THRILLED.
She would go to sleep in the summer with ALL those blankets piled up and after she fell asleep we'd pull them back so she didn't die of heat stroke! :)
As we would feed her at night when she woke hungry, she began to stop waking and eventually the nightmares stopped.
With Erika, her nightmarish cries were so terrible!  They were deep and terrifying.  Her cries were that of a lost, desperate soul in torment. At first she dreamed in Russian, and after 6 months, she started dreaming in English.
We would hear her cry out.... NOOOOO!!!! MAMA!!!!  and we would run.  She would be rocking back and forth trying to comfort herself and we would hold her.  She would wake up, and smile at us and then peacefully drift off to sleep, not remembering the horrors of the night.
I was SO GLAD she DIDN'T remember! Some things ought not to be.
The dreams that went on several times a week, then went to once a week, then once every couple of weeks and then once a month and finally, FINALLY after about 2 years.... never returned.
We are so thankful!
Alli told me that she too struggled with bad dreams, and sure enough, on our first night together, she had a terrible nightmare.  I was laying next to her and held her, gently waking her up to tell her she was safe.
She has only had 1 other night mare in 22 months!
One of her early observations after she had been home a short time was, "Mama, I don't have nightmares any more!"
Praise the Lord for peaceful sleep!
My sweeties...... sleep in Heavenly peace! :)
Posted by Christie M at 9:38 AM

So many precious photos, but the one of Mike holding Anna speaks volumes to me.

Great pictures - glad that which was lost was found!!

As for the night terrors / trouble sleeping - our adopted kids were 3 for 3 on that one. I like to consider myself a peaceful man - but I also acknowledge that "beast" that we all have (if we are honest with ourselves and even admit!)

But with our second adopted - the night terrors - when she was in "that place" - well removed from where she was physically - if I ever learn who is responsible for that pain I will hunt them down...no child should know those feelings!

But love and time heal - and today we're in a better place. Maybe not exactly where we want to be or need to get to or want to find - but better!

Praise for your successes - and prayers for continued healing!

Oh Believe you me Aus, I have had to battle thoughts or pure anger towards those who have hurt my kids. It is HARD to look at those little faces and think somebody could inflict such evil.
But then, I am convicted in my heart that we are all CAPABLE of evil. Each one of us....were it NOT for the grace of our Lord, who changes us from the inside out.....
So I hate the evil done, but pray for the one who did it. AND then, for one in particular, we wrote a letter to the orphanage director JUST IN CASE he didn't know.... and detailed what had happened. WE carbon copied it to the NAC and to the U.S. Embassy adoption interest section.
When we returned for a mission trip, that particular person was no longer there. :)

Fortunately our children have never had trouble sleeping - not even Nastya, who should have had bad dreams, if anyone ever did. Sergei did used to talk to himself in his dreams a bit, but I could never quite make anything out - so frustrating! I felt it would be the key to his heart or mind, or something.....

My own Lydia occasionally walked in her sleep and one time this took her into the bathroom where she fell, and cut her lip open - so she woke to pain and blood everywhere! THAT was a nightmare for all of us!

I so love your blogs. Love to read that these sweet girls are being healed and made whole and will have a wonderful future.