How God Uses Even Our Selfishness For HIs Purposes 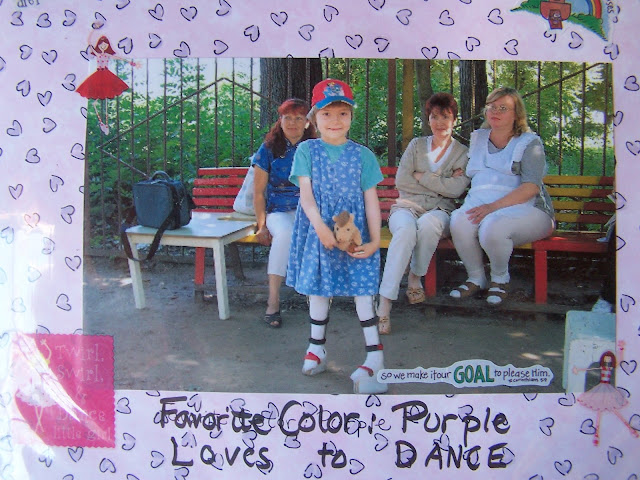 I have wanted to share this since 2006 when I started this blog.  Our 2nd post <--- link  was all about our Trip to Ukraine.  It was more, just a series of emails.  The April 17th Email was written by Mike's Dad.  He said there was a story to tell, and I am going to tell that story today.

We were sharing this with our Pastor Justin on Sunday and I remembered again, how God is so full of Grace and Mercy towards His children.

Mike, Erika and I were back in Kyiv on the last leg of our trip.  She had passed the American Embassy physical, and had her passport.  We had all of our adoption documents, but we were there a little longer than expected, and had to change our Air  Line Tickets.  We had one day to find the Delta Airlines office in Kyiv, but they had MOVED, and we couldn't read the door in Ukrainian that gave the new directions.
We called the phone number feverishly, but nobody answered. Instead, we got a disconnect message. Or I think that is what we were getting.

Our translator was gone for  Easter Weekend.  We were quite comfortable when she wasn't with us, and in fact found it better for her time with us in Kyiv to be limited.  She was young and sweet, but made some errors in judgment that caused everybody struggles.  She kept purchasing gifts for Erika, and at one point had Mike carry all her luggage while she pushed Erika in the wheel chair.  Needless to say, we were a little stressed, and concerned and disappointed that her first Ice Cream cone didn't come from us, even though we had made a real request that it did.
I know this may sound silly, but we were being very careful with a very attention deprived, sensory deprived child, and we were on red alert trying to get her through without too much stimulation.
I was cooking most meals so we could just eat as a family, though we did meet with another family a few times and took walks.
Erika ENJOYED the sun and the sights. :)

I remember enjoying that Easter  Sunday morning SO MUCH, listening to the Church Bells going off all over the City, and standing on the balcony of our High Rise Apartment Building to remember the Resurrection of our Dear Lord.

After being pretty exhausted from a full day on Monday, longing for home, anxious to  be back with the girlies, I headed out to get some salsa, and ground pepper.  We were going to have scrambled eggs and toast, and I wanted some spice!  This was my "pre night shade" era where I could have SALSA!

However, Salsa is not a popular item in Ukraine.  IN fact, it was TERRIBLY expensive, so much so, that I could not justify the cost, so I decided to settle for ground pepper.
In the stores, you are not allowed to go behind the counter, you have to point for things, or say the correct word in Russian or Ukrainian.
I waited in line and when I got to the counter I couldn't remember the word for pepper.  So, I said "salt' in Russian and then signaled "SALT....shaking  and ?? shaking my other hand hoping they would understand I wanted pepper."
She did! YEA!  But she gave me pepper corns, not ground.  So I explained with hand motions again.... doing the grinding motion.
She got mad and kicked me out of line!  I was BOOTED!


When I got back, Erika was enjoying a luxurious bath and I started dinner.  But I couldn't get those pepper corns crused.  It was too hard and they kept shooting out from under the knife.

That is when MY window of tolerance shut and I began to cry.  Mike came in to find a hysterical wife saying, "I'M NOT COOKING ONE MORE MEAL!" "I'M NOT!"
I told him, "I want NACHOS and Jalapenos and SALSA!"  We had been SO GOOD not to go to McDonald's when there was all that wonderful Ukrainian food to be had!
McDonald's was for coffee only, and the bathroom, but that is ANOTHER LONG STORY!<--Link

We knew there was a TGI FRIDAYS about 4 blocks from our Apartment, so we headed out.  When we arrived, the restaurant was FULL! There was no place to wait, especially with a wheel chair, but we insisted we would wait!

Then, this man's voice that was DISTINCTLY AMERICAN spoke up and said, "I'm at a table for 4 and I'm by myself, I'll move!"
We said, "Don't Move, can we just join you?"  He said, "Sure!"
So we introduced ourselves, and he asked the obvious.... "Why are you in Ukraine!"
We explained to him why we were there, and told him all about the miracles that took place to even get there, and all the adventures we were having.

Erika entertained us with her new ability to Sing "Jesus Loves Me"..... every time she heard the word "Cheese", she'd break into song. LOL   (cheesus loves me) :)


We told him about my pepper nightmare and need for spice, and then told him we needed one more miracle.  As we explained to him our predicament about needing to change our Airline Tickets by the very next day, or we'd have to buy new ones, he was intrigued.
"What airline are you with?"

We told him we were with Delta Airlines.   He got this huge smile on his face and said, "Well, it looks like your last miracle has taken place!"
"He then picked up his knapsack.... It said, "Delta Airlines" right on it!  He was the NEW DIRECTOR for Delta, and had been in Ukraine for 6 weeks, originally from Atlanta Georgia!

We couldn't believe it!  He pointed to a building across the street from the restaurant, and said, that is the new building. Sorry about the phones, nothing happens quickly here. LOL
And then, he said, when you come tomorrow, ask for me, I'll come out and make sure you are taken care of.
The next day, we did just that.  When he came out, he explained to the two ladies that were there what we needed.  They were so kind, and as they were looking for the best deal on tickets, both had little tears streaming down their faces; happy that Miss Erika was headed to her forever home.

I will never forget how God even used my own selfishness of not wanting to cook, to bless us so very much with one more confirmation that HE was in control, even to the point of the mean pepper lady who kept on kicking me out of line! :)
And we RESTED in HIM.

And then, about 4 hours into our second flight, my mind was numb staring at that airplane going across the sea.....:)
And I began to struggle with fear thinking, "We have no money! We have to start over after being out of business for the last 5 weeks....we now have 3 children!  Are we crazy??"
And as soon as I thought it, I confessed....."Lord, you know all things... If you can get us through Ukraine and back, while it is supposed to be closed, arrange for the details of our trip home, and provide all you have provided.....I'm SURE you will not abandon us!

When we finally made it home, it as very late.  We headed straight to bed and sort of went into hybernation.  Our ministry group  had decorated our home, filled it with food, and left all sorts of cards on the counter.
At about 3:00 in the afternoon, I was opening cards and then found an envelope with $$.... a GIFT to us from those who love the Lord.
And another thing was placed in my heart to remember God's Faithfulness to His Children.

What a beautiful story. We're going through a dark patch, and I've been having trouble "holding on to the right thinking" the past couple weeks - thanks for the reminder - I needed that!

That is such an absolutely WONDERFUL story! Thank you so much for sharing it!
I just love how you found the man from Delta Airlines. Wow!